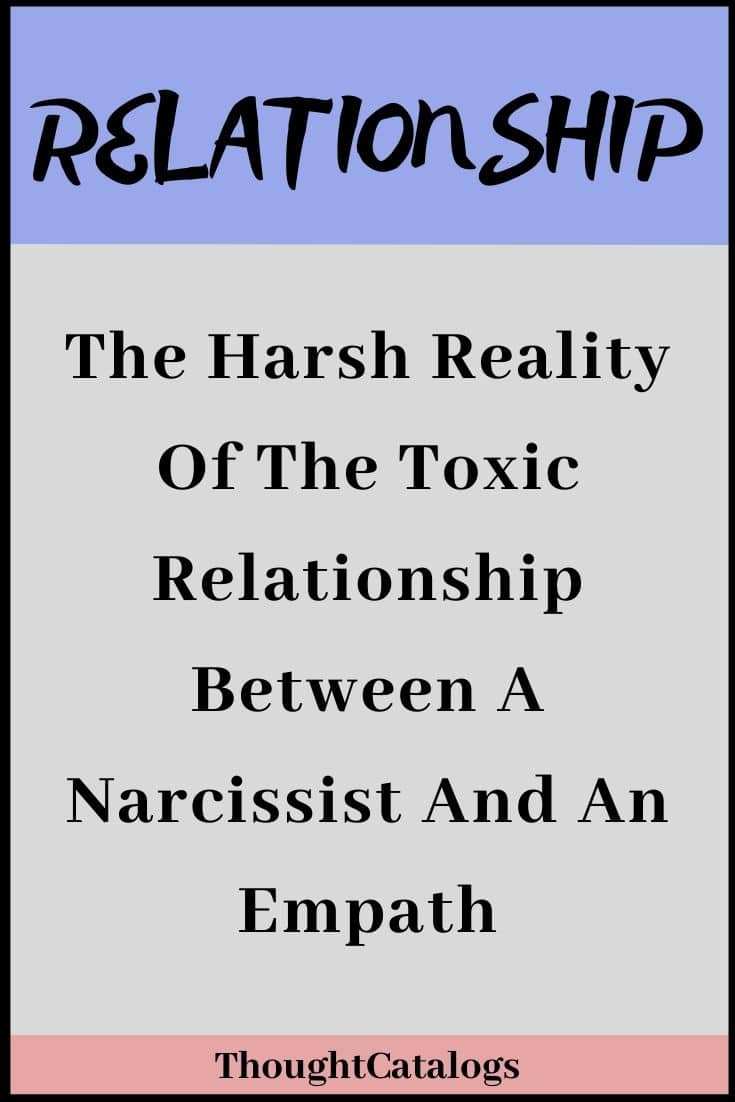 An empath and a narcissist. Good and evil. Light and dark. Yin and yang.

As you can see, all these pairs are opposites but they have something in common—they are parts of pairs and no matter whether we want to admit it or not, they are in some kind of symbiosis.

One of them is bad and the other one is good. So, if you stop for a second and think about that, you will see that all the time in life, somehow something good ends with something bad. And so does an empath with a narcissist.

An empath is like an angel sent from heaven to bring peace among people. That kind of person thinks that everyone around them is good and they never think that people have hidden intentions or that they can hurt them.

They think that they shouldn’t judge anyone and that they should let others be. An empath is someone who feels all those emotions that you don’t talk about but since they have a sharpened sixth sense, they can see how you feel just by looking into your eyes.

They are aware of the fact that you are suffering and they will always try to help you as much as they can. In some situations, they will put you first and neglect themselves because they know how you crave some kind of help.

An empath is someone you really want to have in your life because they are an honest and sincere friend, a loving partner and someone who can transform your life into the most beautiful story.

And then there is the narcissist.

A narcissist is a person who is not like that by choice. They probably had some sort of trauma in the past that affected them so much and transformed them into the monster they are now.

They will always want to feel worthy and in a relationship, they will feel above their partner just so they can feel good in their own skin. The feeling of being superior and the dominant one is bigger than any kind of love and that is something all narcissists believe in.

The worst part is that they never feel any guilt for doing all the bad things to the people who love them and they never accept help from others to change. They are someone you don’t even want to know or be in a love relationship with.

They are someone you should stay away from because they don’t know anything other than hurting people.

So, you have an empath and a narcissist. You have a good person and a bad one. And what the worst part is that in most cases, the two of them fall in love. You probably wonder why but there is an explanation.

There is some unknown attraction between them and they somehow always bump into each other. They fall in love so easily and every moment that they spend together is like a fairy tale.

They don’t even get to know each other well, thinking that they have chosen the best person to be with. In fact, a narcissist doesn’t mind what will happen because he is emotionally unavailable.

He needs someone who he will feed off of and an empath is the perfect victim for that crime. On the other hand, an empath is head over heels in love with a narcissist, thinking that they found their soulmate. They think that they hit the jackpot when meeting them but soon they will reveal that they just hit rock bottom.

It is just a way for a narcissist to express all his anger to someone as innocent as an empath.

It starts as something beautiful but as time passes by, it transforms into a horror you just want to get away from. An empath is someone who always tries to make things work, while a narcissist sees that and takes advantage of it.

He inflicts pain on an empath every time the empath shows more love and affection. As soon as an empath shows that they are in love and that they need their partner, a narcissist will see their chance to hurt them and in that way, make themselves feel better.

They will do all sort of things just to get what they want. They will use the love their partner feels toward them and they will abuse them mentally and physically, blaming them for making them behave like that.
They will tell an empath that their behavior makes them act like that and that they should change. A narcissist will convince an empath that they are the crazy one and that they make problems where there aren’t any.

They will gaslight them, ignore them, neglect them and act like they are their worst enemy. And every time an empath says that they will leave, the narcissist changes the story by telling them that they completely lost their mind because of their enormous love, that they want them to succeed and that they are their only bright light in life.

They know that the empath will feel sorry for them and that they will come back, into their claws again. And when they do, the agony continues. More tears, more pain, more sleepless nights, more abuse but less love.

An empath will feel like they are in-between two fires because on one side there is someone they love, no matter what they did to them, and on the other side, they are obviously not feeling good with them.

But what you need to know is that there is NOTHING you can do to change a narcissist. There isn’t any amount of love you can give them so that they would act normal.

They are broken and they don’t want to be fixed. They are comfortably numb just the way they are and because they are like that, they want to make someone else feel desperate. Their main priority is to destroy the life of a person capable of love because they can’t do that and they are jealous of everyone who shows those emotions.
That’s why the best decision for every empath would be to run as fast and as far away as they can after seeing the first red flag sign of a toxic and narcissistic relationship.

If you see that you don’t get the love you need or that you don’t feel good in your relationship, try to talk to your partner but if he is a narcissist who doesn’t want to change, you should just leave.

I know it hurts to walk away from someone you love. I know it is bad when you leave everything that you two had but let me ask you something:

Who was the first one who gave up on your love? Are you the only one who needs to try for things to work? I don’t think so.

Love is sharing all the good and the bad with your other half and feeling satisfied in that relationship. Love means feeling that you are worthy and enough for the person you share your bed with. And what an empath has with a narcissist is not love.

Maybe he doesn’t use his fists but it is still abuse. It is constantly walking on eggshells. It is being afraid to admit to them how you feel about the love you have with them because you know you will piss them off by saying so. It is doing all that they want and nothing you want.

It is mind-fucking and that is not what you deserve. In fact, it is something nobody deserves.
It is something that can eventually kill you because you won’t be able to put up with all that toxicity for too long.

So, leave while you can. Leave and never look back. Leave without thinking about the consequences. Leave while you are still alive.

Memories Of A Narcissist

These 3 Zodiac Signs Will Have The Worst New Moon In Pisces 2019, Thanks To The Drama

The Two Types Of Each Zodiac Sign – Which One Are You?

The One Word That Will Define Your 2019, Based on Your Zodiac Sign

Are You Sleeping With Your Soulmate? 12 Ways To Tell

ThoughtCatalogs - October 12, 2019 0
1. Love is present before, after and during the sex act Their love for you doesn’t change, and it’s always stable, regardless if you are...