If you’ve gone through a breakup or you’re in a relationship and wonder how to make your guy feel sorry for not treating you right, you’re in the right place.

The thing with guys is that most of the time they’re not even aware of the fact that they did something wrong to you. They think if you don’t freak out immediately, everything must be fine. Guys don’t understand that women react differently to mistreatment.

Women have developed a huge capacity to resist pain, and that is why women are able to give birth and go through enormous amounts of pain without saying a word. That is why when he hurts you, you simply ignore the feeling and pretend for some time that you’re not hurt, until it kicks in.

He continues living his life, thinking he hasn’t done anything wrong to you, and instead of feeling sorry, he’s the total opposite. When something like that happens, you have every right to make him feel sorry for not treating you the way you deserve, and here are 6 ways that will help you accomplish it.

I know you have the urge to tell him everything and make him suffer, but that’s the worst thing you can do. The golden rule is not to call him and not to text him. If you do text him or even worse call him, he’ll think that everything’s like it used to be, and you’re still that silly woman, begging for an apology.

Don’t do that. You have to let him know that he hurt you, but you’re not mad at him – you’re disappointed. Yelling on the phone will only have a countereffect, and you don’t want to confuse him or make him think you’re desperate. You’re not.

You’re perfectly aware of what happened, and you have every right to be disappointed. Yelling will only mean you’re mad at him, but if you ignore him, he will soon regret what he’s done to you.

2. Ignore him when he’s around you

If the two of you are living together, no matter what he does or say, ignore him until he apologizes for his behavior. Simply keep doing what you were doing and pretend that he doesn’t exist. Men are really case sensitive when it comes to this.

They can’t stand the fact that they are no longer wanted. And that is when he will start rewinding scenes in his head in order to find the reason for your ignoring of him and to apologize for it. The same goes if the two of you have just broken up.

If you ask any man about what’s the worst thing a woman can do, they will tell you that it is simply replying with ‘Yes’ or ‘No’. If you keep talking with your normal sentence construction, they will think you’re just currently pissed off for some unknown reason and you will somehow magically change your behavior.

But, if you reply with ‘yes’ or ‘no’, he will know. He will instantly know that he’s the one who fucked it up, and he will instantly feel sorry for whatever he’s done to you.

4. Show him that you don’t need him

Of course, you don’t need him. But guys don’t realize that. They live for the feeling of being needed by someone because that way they think they are above you.

If you show your vulnerability and beg him to apologize or to come back to you, he will not do it because it is not inviting. But, if you show him that you don’t need him and you’re perfectly fine without him, he will immediately realize that he’s done something wrong.

It will be suspicious to him because all of a sudden, you no longer need him or want him. This will strike his ego, and he will feel bad about himself for failing as a man which will force him to feel sorry for all of his previous actions.

5. Have fun and look your best

They think that they have to be the center of your universe. If you’re having fun and at the same time ignoring him, he will realize that he must have done something terribly wrong for you to act this way.

6. Get rid of some of the items he gave you

After a breakup, the smartest thing to do is to get rid of all of the items he ever gave to you because it will help you feel better, and at the same time, it will make him feel bad about himself.

You can pack up all of his things and leave them in front of his doors or deliver them by mail.

When he opens the package, he will recollect all of the past moments when the two of you were together, and it will strike him right into his head. He will feel utterly sorry for not being there for you and for failing as a man to treat you the way you deserve. 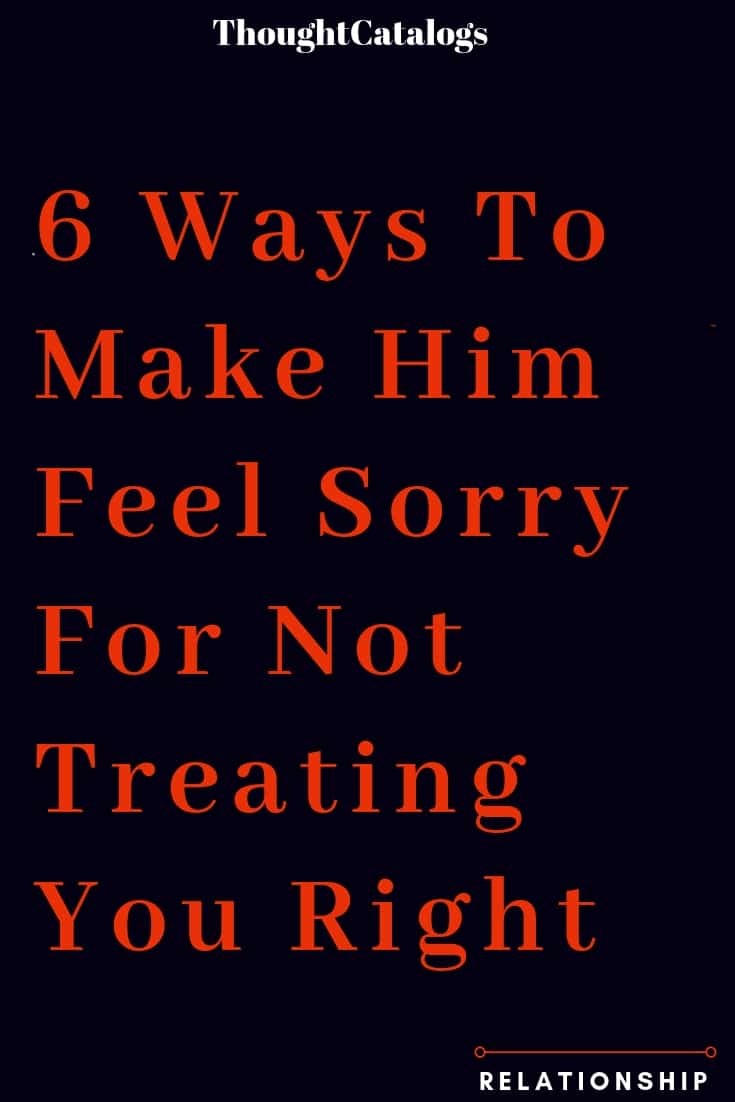 This Is Why Hopeless Romantics Make The Best Partners Ever

8 Sweet Signs Your Boyfriend Will Be An Amazing Dad