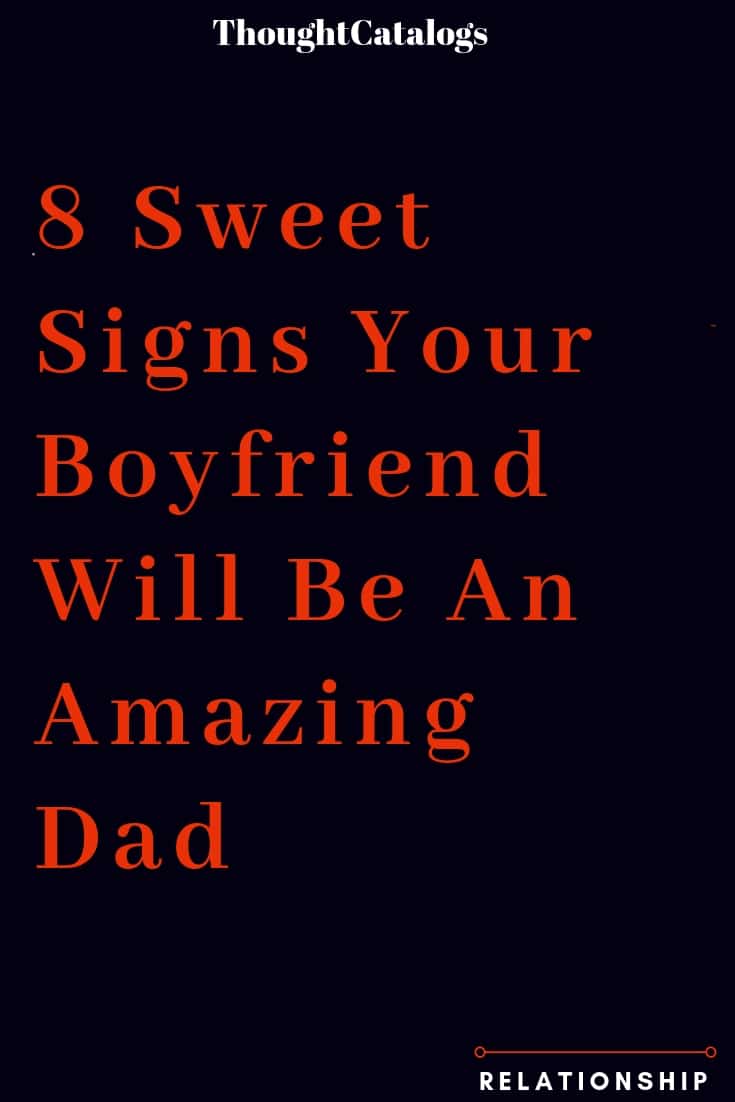 1. He likes spending time with kids

No matter if your boyfriend spends time with his nieces or yours, he is super fun when he is with them, and he knows how to catch their attention. He tells some great stories, and children like him.

He doesn’t mind spending the whole afternoon playing with them, and nothing is too much for him. You can see the happiness in his eyes when the kids run toward him and jump to his hug. He shows a side of himself you didn’t know existed, but you actually like it.

If your guy learns things fast, it is a good thing because he will be able to take care of your kids in the best possible way. Even if he doesn’t have a clue how to change diapers or wash a baby, he will want to learn it, and nothing will be a problem for him.

He enjoys helping and taking care of others, and he shows that in everyday life. By learning new things, he wants to get to know the world of the kids and to be the best dad ever.

Small kids don’t have a lot of questions, but once they start figuring some things out, they will start asking a lot of questions. If your boyfriend has a special bond with kids, he will find a way to explain things to them through the game.

He will be more than happy to be able to explain things to them, and he will make some extra effort to make them feel good. He will play with them and listen to everything they have to say. In that way, they will like him more, and he will be more attached to them.

A patient guy will definitely make a great dad. That means he has a lot of understanding and doesn’t mind going the extra mile to make kids happy. It also means that he won’t yell at them if they make a mistake, but he will rather talk to them calmly, trying to figure out why they caused some problem.

A man who is patient will also understand that you are exhausted by being with the kids all the time, and he will step in to help you get some rest. He will be serious about his new role, and the two of you will be equal in the relationship.

If your guy behaves well under stress, it is a good sign. That means that he won’t freak out when the two of you get kids and when the first problems start with them.

If he can handle things at work and at home easily, he will also be able to calm down your kid and always remain calm, cool and collected. Also, it will help you to keep your common sense and to not carry all the family burdens on your shoulders.

If all the kids you know love your boyfriend, it means that they see a real friend in him. And that kind of a person will surely make a great dad.

If he is capable of handling 3 kids at the same time and being able to hold their attention, he is a real deal. A man like that is rare nowadays, so make sure that you don’t let him go.

7. He is full of positive energy

A man who is full of positive energy will definitely be a great dad. It just tells how relaxed and easy going he is and that to him the little things matter.

If the smile on a kid’s face can make his day, it is a sign that he will be an amazing dad. He will do everything for his kids, and he will always try to teach them lessons during playing games with them.

If your boyfriend is relaxed most of the time and if he doesn’t sweat the small stuff, it is a good sign. He will be great with kids, and he will never raise his voice to them.

He is able to remain calm even when some problems occur and that is practically the most important thing when you have kids. Trust me, a man like this won’t lose his nerves around kids, and yet he will get all he wants from them.

Never Give Up These 8 Things For A Man, No Matter How Much You Love Him

Stop Telling Me I Need To Find A Boyfriend

What Makes Each Zodiac Sign Ignore You All Of A Sudden

To The Friend Who Had My Back This Last Decade –...

ThoughtCatalogs - December 17, 2019 0
They say that people who have known each other for more than 7 years are considered family. Well, we have officially fulfilled that time frame,...