So, you love an alcoholic? I did too. Loving an alcoholic can be a very rewarding experience, but it comes with a unique set of difficulties. Whether your partner is in recovery or is still struggling with addiction, you too will become a part of an alcoholic world and will adopt coping mechanisms of your own, some of which are just as dangerous as addiction.

To love an alcoholic, you must love yourself and address your own need for recovery rather than focusing on their alcoholism.

Alcoholism is not an identity, but it is a disease. It is a disease that spreads beyond the addict to those closest to them. When you love an addict and are an influential part of their lives, you too are suffering from the disease of alcoholism. It is a disease with many symptoms, and the most deadly for the loved ones is a focus on the recovery of their partner, friend, or family member and ignorance of the disease in their own life.

Alcoholism stems from a desire to escape or numb emotional pain. To the general public, most addicts are coping with life like everyone else, but those closest to them see the chaos and experience the consequences of alcoholism—irresponsibility, neglect, abuse, emotional roller coasters, and more. Each individual’s actions may vary, but there is always a level of uncertainty and confusion present in the life of an alcoholic. This uncertainty and confusion is a symptom of the alcoholic’s disease and is the root of the disease in those who love them.

I was engaged to a recovering alcoholic and I began that journey blind to how the disease spreads. My love for my fiancé grew the more I was involved in his recovery process. I wanted to be the best support I could be. I set out to learn as much about alcoholism as I could. Everything I learned was centered around his experience, around his struggle and his recovery. Moving forward in the relationship, I was naive to how the disease was slowly seeping into my own existence.

The disease took root in my life when my partner began to neglect his recovery. He began to exhibit many of the signs of alcoholism, just without the alcohol. Life grew uncertain, I grew confused, and I too became ill.

Al-Anon, a support group for friends and families of alcoholics, pinpoints the characteristics of the “supporter’s” illness, which mirror the symptoms of an alcoholic. We suffer from obsession, anxiety, anger, denial, and feelings of guilt.

When I grew ill, I became obsessed with making my fiancé’s life as easy as possible. I was determined to relieve any pressures that might lead him back to drinking. For those who love an active alcoholic, this is seen in an effort to get them to stop drinking at whatever cost. We become so obsessed with the health of our partner that we begin to treat them almost as patients or children rather than our partner or spouse. The worse their symptoms, the more we try to control the situation, and often the more they are tempted to continue in their acts.

In our efforts to control their actions, we worry. Seeing the person closest to us make decisions that harm themselves and their recovery creates a well of anxiety in our hearts. We make excuses for their actions and try to fix any problems. To us, it appears as if the addict doesn’t care about the aspects of life they are neglecting, and we take on the worries we think they should have and pile it on top of our own.

The anxiety leads to outbursts of anger or frustration. Just as the alcoholic becomes unable to control their actions and responses, we too begin to lose control and respond to our pain and hurt wanting them to “pay” for the pain they caused.

The obsession, anxiety, and anger create a fog. We have become so fully entrenched in a disease we don’t even realize we have that it is hard to see beyond our situation.

I lived in this fog for a few months. Within this fog, I kept trusting in his promises that things would get better, ignoring my intuition that there was something seriously wrong. I latched on to any ounce of hope I could, denying reality. I blamed the entire situation on myself, believing it was my inability to be a good partner or my own issues that were driving him to mistreat me.

At a point of desperation, I found myself looking for the stereotypical AA pot of coffee at an Al-Anon meeting. The youngest by 15 or more years, I felt out of place. But it was here that the fog began to lift and I could see my own disease and how it was eating away at my joy and peace. And that’s when I realized that to love my partner in his recovery, I had to fully love myself and focus on my recovery rather than his. What to me seemed like an act of selfishness was actually a greater act in humility and true selflessness—a selflessness without pride.

As soon as I addressed my illness, the fog began to slowly lift. I was still entrenched in the obsession and anxiety but began to see and grasp my reality. The more I focused on my recovery, the more the fog lifted. For me, the fog lifting meant trusting my intuition once again and seeing the truth of an uncomfortable situation. My partner was not neglecting me just because he was neglecting his recovery he was also seeing someone else.

It was time for me to leave. Leaving is not the answer for everyone, but I knew it was what I needed for my health. It was not a decision that I wanted to make. I loved him and truly wanted to spend my life with him. Still engrossed by my desire to fix and control the situation, ending the relationship was one of the most difficult things I had ever done. Retrospectively, I see that if it wasn’t for the steps I made in my recovery, I would not have been able to leave. I would have still been so deep in my illness and the fog that I would have stayed in the relationship, blind to the toxicity.

Even after the breakup, I found myself again focusing more on his recovery than my own. “If only I would have gone to Al-Anon sooner, I would have been able to be a better support. If only I had known how to act instead of react, maybe he wouldn’t have cheated on me.” When I caught myself saying these things, I realized I was once again gravitating to the habits of before, trying to have control. I had to step back and focus on my own recovery once again.

My recovery is not over. Just as a recovering alcoholic is always in recovery, I too will always be healing. The habits and desires become almost unnoticeable with time, but the tendencies don’t disappear, and it is my awareness of them that will keep me from falling ill again.

Take courage and have hope. Addiction is not an identity nor a hopeless cause. But the hope is not in the promises of another but in personal healing. Loving an alcoholic means loving yourself in a new way. It requires accepting the things you cannot change, finding the courage to change the things you can, and discovering the wisdom to know the difference. 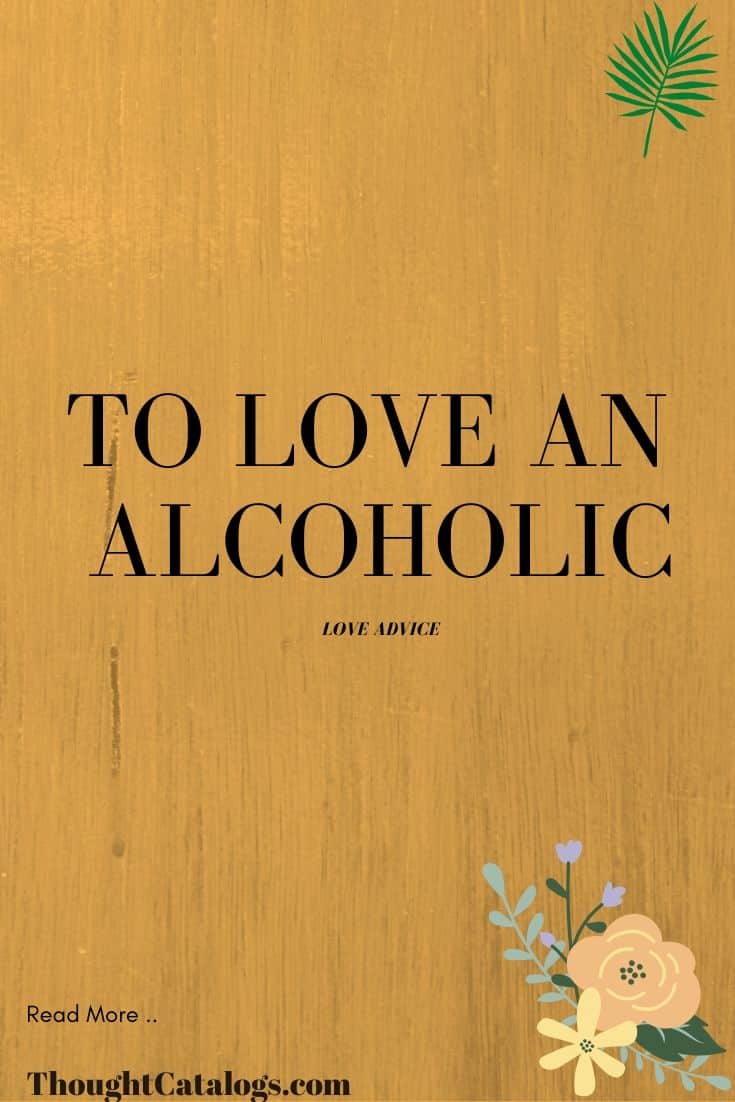 When This Is All Over, Will You Come Back To Me?

I Will Be Okay After You