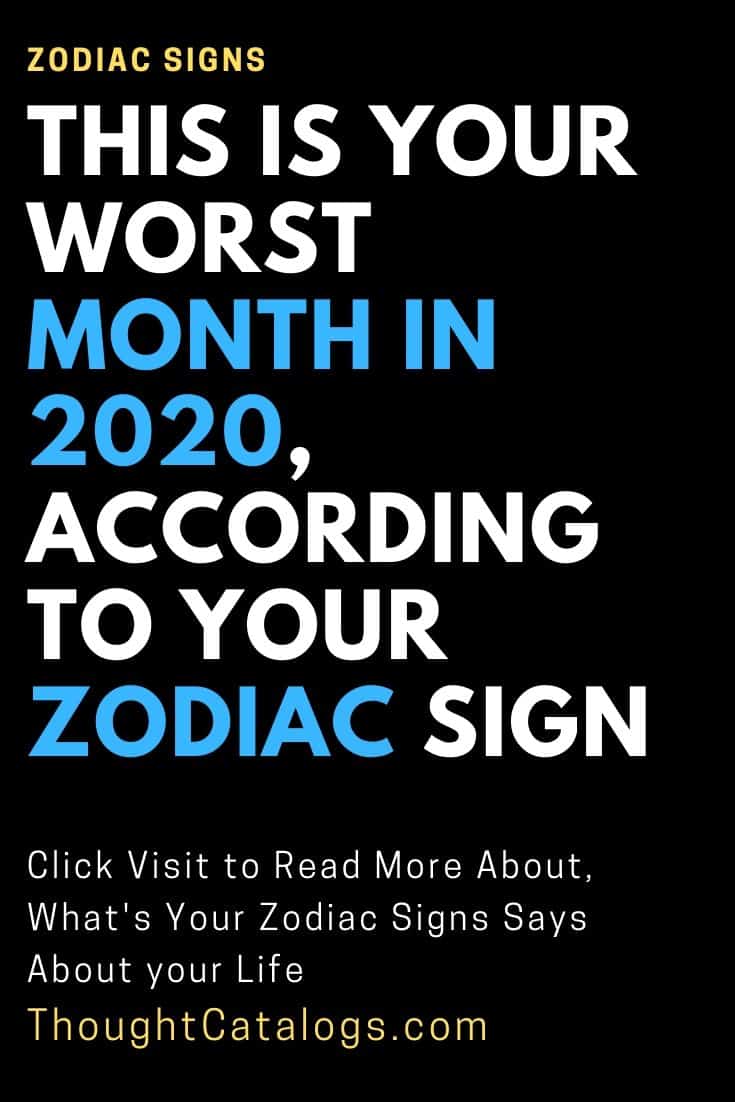 Every person is excited and impatient to see what the New Year brings.

This is especially true for the ones who have had a crappy year in 2019 and are wondering whether the stars have something more positive in store for them in 2020.

But no matter if this year brings happiness or it’s the worst one yet, every zodiac sign will have at least one period during this year when the stars won’t be turned in their favor.

Without any further ado, here is your worst month in 2020:

Your biggest problem will be the Mercury Retrograde at the beginning of this month.

Usually, summer brings happiness and relaxation, but you’re going to experience the dark side of this month which you have never seen so far.

This will be an emotionally challenging time for almost everyone, but you’re going to have it worse than anyone else.

Your relationships with other people, both romantic and friendly ones, are going to cause a lot of trouble.

You won’t have the strength to handle most of it, especially the bonds you have in your workplace.

Your anxiety and the tendency to overthink are going to boom this month.

Just as you thought you had brought yourself to the point where you could rule with your mind, this will happen. Making decisions in February is not going to be an easy task for you.

Usually, you’re very prone to manipulation, and it’s very easy to change your opinion into something else.

This will be used against you in February 2020.

Your problems will be caused by the Mercury Retrograde in Pisces which will turn this month into a heartbreak month.

If you had luck in love so far, the month of March will set you behind on whatever you’ve done to now.

This month, forget about making any kind of progress in dating or any kind of relationship in general.

Put your love life on pause, and wait for better days.

It will be pretty rocky, especially as it’s the month you’re celebrating your birthday.

It’s not that comforting to find out that the worst month of the future year is exactly the month you were born in, but at least it’s better to know so you can prepare.

Nevertheless, don’t worry. Despite the Mercury Retrograde causing a mess in your life that month, you’re going to be fine.

At least the rest of your year will turn out to be peaceful and great.

You are not that lucky to just walk through this month. You’re definitely going to worry more this month than others.

You’re going to have to work twice as hard as anyone else for something you want to achieve.

This is especially true when it comes to relationships. A piece of advice: Don’t let your frustrations control you.

The presence of Pluto will have a negative effect on you at the beginning of the year.

That’s why February is the month of crisis for you. Your problems are not going to be love-related nor any kind of relationship-related.

You’re going to have inner struggles. The mood swings are definitely going to make you crazy.

While you’ll desperately look for answers, don’t be surprised if you don’t find any.

February is that month for you where you’re going to feel lost and confused most of the time.

Like some other signs of the zodiac, you’re also experiencing some difficulties in the month of July.

Don’t let your spirits down because this is the only bad period you’re going to have until the next New Year.

The whole of 2020 will be great except for that month. The point is…try to survive it, and don’t let anyone frustrate you or provoke you for any reason.

That quarrel won’t go the way you planned, and it most definitely won’t end up in your favor.

You can thank this period to your ruling planet Jupiter and the beginning of his retrograde.

It would be silly of you not to expect at least one month in 2020 to be a crappy one. Although your private life will suffer, it won’t be as nearly as bad as your everyday life.

With that being said, you shouldn’t concern yourself that much about your love life. It will more or less stay like it was so far.

The problems are going to appear in the financial sphere of your life. Be careful where you put your money this month and how much you spend it.

Well, never expect only good luck to appear on your life’s path. There always has to be a bit of trouble. Again, the main one to blame for this is the Mercury Retrograde.

The biggest problems will appear in your communication skills.

Somehow, you won’t be able to explain to people what you think and what you want, and that is something you always knew exactly how to do.

July is the saddest month this year for many zodiac signs, and you’re one of them.

Unlike some other signs, your problems are going to be strictly love-related ones. Your relationship—if you’re in one—will face some serious problems.

Try to avoid this by first looking at yourself and asking yourself if you are the root of the problems in your relationship.

Be perfectly honest with yourself, and most importantly, be clear with your feelings.

For you, the presence of Jupiter will have negative consequences on your life as it will for some other Zodiac signs.

Also, your problems won’t be relationship-related as much as financial.

Don’t be hasty in making any financial decisions.

Take this warning seriously because the period will seemingly be perfect to make those kinds of decisions when, in fact, it’s really not.

It will only bring bigger and more serious problems. So, be patient, and wait for the better period of the year which is close to the year’s end.

Love Horoscope For December 2021 Is Here

Your September 2021 Horoscopes Are Here: Take Control Of Your Life

This Is How To Get What You Truly Want In 2019, Based On Your Zodiac Sign

Here Who You Should Date, Based On Your Zodiac Sign In 2019