People are creatures of habit, and once they create a routine for themselves and stick to it for the longest time, it becomes very difficult to get out of it.

As twisted as it sounds, being in a toxic relationship where things are always a certain way and which allows you to know the endgame is a source of comfort and security for some people, and they just aren’t ready to break out of it.

Having something you are familiar with, with minimal risk involved, is something that some people are extremely drawn to, and due to that familiar feeling, they find themselves in a non-ending cycle of pain and hurt.

Everyone’s pain stems from somewhere, be that from a traumatic childhood experience, a bad relationship that is haunting them to this day or any kind of abuse.

And since that pain is all they know and all they are taught to accept, they find comfort in the instability their toxic partner provides them with.

When pain is all you think you deserve, it is challenging to seek any other type of treatment.

One other instance is being blindly addicted to a person we know is not good for us.

It is way too easy to get lost in a relationship when we are blinded by ‘’love’’ that is merely an unhealthy addiction to the wrong person.

In order to justify going back, we tell ourselves: ‘’Maybe this time he’s really going to change’’ or ‘’It was me who made him react that way’’, so we would feel less shameful for not being able to say ‘’No’’ when it’s the only right thing left to do.

A friend recently shared with me that she decided to take her ex back after having been hurt numerous times by him because she convinced herself that he needed to make up for all those times he had mistreated her.

People will tell themselves whatever they need to hear and make up the most peculiar and disturbing reasons to go back to those they were hurt by because they need to believe they are doing the right thing.

Another reason why people go back to their toxic partners is because it’s easier than opening up to someone new and making yourself vulnerable for new potential heartbreak.

Being in a long-term relationship and investing so much of your soul, energy and time into this one person is a lot to give up, so it’s easier for some people to go back over and over again, hoping it will be better, than to start something brand new.

Putting yourself out there again is scary, daunting and risky since you are opening yourself up to new possibilities of ending up hurt and disappointed.

After allowing ourselves to be vulnerable in front of someone and therefore making them our safe harbor, it is difficult rendering them unsafe.

They are what’s familiar to you, and they know you best. And after distancing yourself for a little while, you romanticize what you had and make it seem better in your head than it actually was, which justifies going back to that endless cycle of pain.

Going back to people who caused us hurt is often connected to problems with self-worth. Trying to break out of an unhealthy relationship and then giving in and reviving it for a billionth time contributes to feelings of worthlessness.

The idea of anyone not feeling like they are good enough or even worthy of a real, kind, genuine type of love is heartbreaking and proves how easily we can all be manipulated into having the wrong image of ourselves.

Believing that this hurt we go back to is the extent of what we deserve is wrong on so many levels, as it is only a tactic used to make us go back to pain and neglect.

You don’t need validation from anyone that you are worthy of love. When he tells you he’s the best you’ll ever have, know that he is wrong! When he manipulates you into coming back, be brave to say ‘’No’’ and walk away from his web of deceit.

You are beautiful, strong, kind, and deserving of the best kind of love there is. Getting out is never easy, but there is always hope when you decide enough is enough.

It’s never too late to walk away from pain and decide to find someone who loves you and makes you feel safe. We are all deserving of love, and you are no exception. 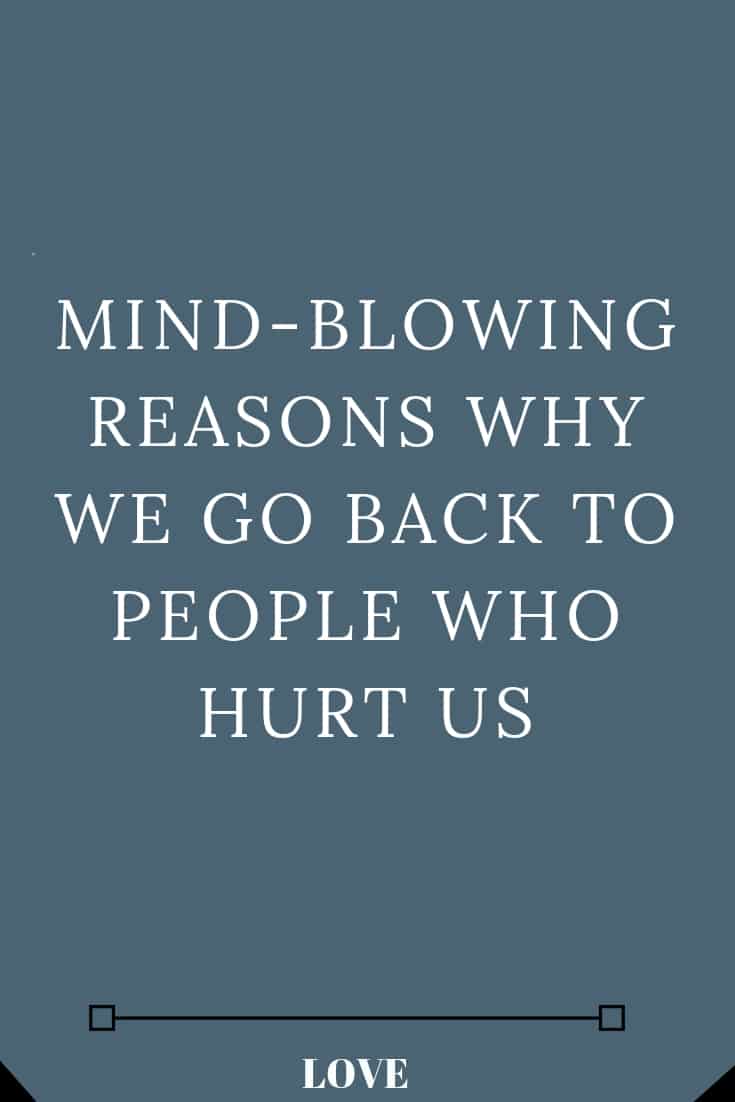 IF YOU AREN’T SURE THAT HE LOVES YOU, CHANCES ARE THAT HE ACTUALLY DOESN’T

IF YOU CAN’T LOVE HER, SHE’LL MAKE YOU MISS HER