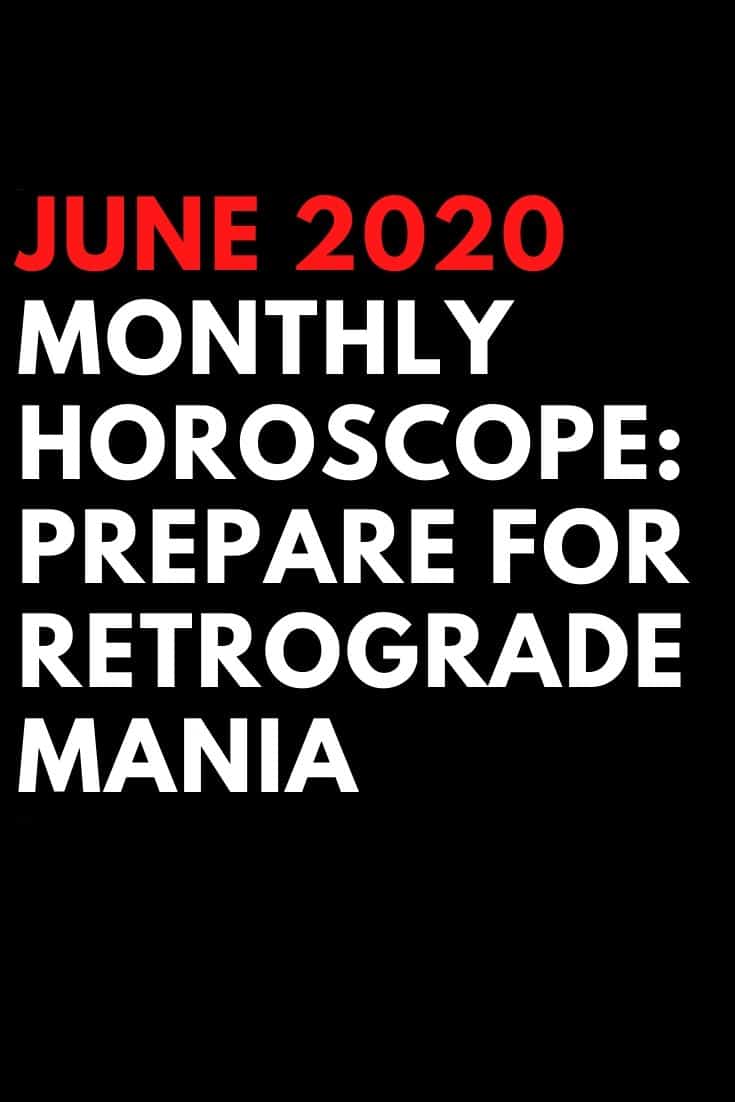 One step forward, a few steps back? In June, five planets will be retrograde, creating the illusion of spinning backward. During a retrograde, we’re asked to slow down, correct course and handle unfinished business. The past becomes pivotal. It’s a tough act to follow during fiery Aries season, which is all about embracing the new.

Our June monthly horoscopes and new monthly podcast are here! And the planets have a LOT in store yet again. March and June  are among 2017’s most bustling months in the stars, so prepare yourself for another non-stop ride.

As June  begins, two planets are already retrograde: expansive Jupiter (from February 6 to June 9) and harmonious Venus (from March 4 to June  15). In astrology, Venus and Jupiter are known as “the great benefics” for their positive and helpful powers. So to have both of them dimming their shine at the same time can test our goodwill. Jupiter is retrograde in Libra, the sign of harmony and balanced partnerships, while Venus will back from aggressive Aries into compassionate Pisces. Kindness, wherefore art thou?

Retrogrades occur when the Earth outpaces another planet in its journey around the Sun, creating the illusion that the planet is moving backward. As a result, everything that planet astrologically governs can go haywire. But it’s also a time to reconnect with the past, making sure we haven’t cut crucial corners or thrown out the metaphorical baby with the bathwater. Yes, change and progress are good—but retrogrades reminds us to value those things that stand the test of time. (To learn more, read our in-depth post on retrogrades and what they mean for each planet.)

Joining the retrograde brigade this month are Saturn, Mercury and Pluto. We start with structured Saturn, which reverses in worldly Sagittarius from June 5 to August 25. Is something in your life built on a shaky setup? You’ll find out when inspector Saturn goes backward.

Saturn retrograde will remind us that this world needs to be safe for people of all cultures, identities and religions.

Sagittarius rules global politics, cross-cultural affairs, travel and education. These areas could get even more strained as boundary-enforcing Saturn tightens its grip. Here’s hoping this retrograde will actually remind us that this world needs to be safe for people of all cultures, identities and religions. During Saturn retrograde, anything built on a flimsy foundation will crumble. Here’s hoping Saturn retrograde topples any shoddy and destructive attempts to take away environmental protection, educational programs, religious freedom and so forth.

Communicator Mercury is retrograde from June 9 to May 3, which can disrupt travel, technology and interpersonal harmony. People from the past pop out of the woodwork, and this can be a great time for reunions. But be careful about signing any binding contracts and if you travel, triple-confirm all bookings. This period is best used for finishing projects you’ve already got underway. Mercury will be retrograde in Taurus until June 20, then Aries, two blunt signs. When you’re tempted to “tell it like it is,” do a little self-edit!

Finally, transformational Pluto, ruler of the unconscious, will make its annual retrograde from June 20 to September 28. Time for some serious soul-searching! Blind spots are revealed now. Be careful not to project your own issues onto others, as shadowy Pluto can make us “disown” parts of ourselves. When we do that, those traits tend to show up in other people (mirror, mirror). So if someone irritates you, ask yourself, “What is this revealing about me?” We’re not saying to keep shady characters in your life. Just don’t miss the message.

Pluto is in Capricorn from 2008-24, and make its U-turn for roughly the same dates every year. On the world stage, Capricorn rules governments, patriarchy and hierarchy. It will be interesting to see what else gets revealed (Russian investigations?) during this probing period.

Meanwhile, as these planets putter and poke along, the Sun is blazing through restless Aries. It’s like having one foot on the gas while the other slams the brakes. Aries season is all about fearless and unapologetic self-expression. But we may need to dial down the fierce factor a touch. Not only are we navigating the retrograde planets, but the Aries Sun will make three testy aspects (angles).

On June 7, the Sun forms its annual opposition to Jupiter in Capricorn, tugging us between our personal desires and the demands of our relationships. The Sun and calculating Pluto in Capricorn will lock into a heated square on June 9, igniting a power struggle or two. Then on June 14, the Sun and volatile Uranus make their annual meetup in Aries, a restless “liberation of bust!” vibe that could find people acting in hotheaded and impulsive ways.

Stability, or at least a little of it, arrives on June 19, once the Sun lumbers into earthy Taurus, tucking in for long naps, hearty meals and an honest day’s work until May 20. At least we’ll be able to simplify and prioritize, and even view the retrograde hubbub from a more grounded POV.

The June 26 stabilizing new moon in Taurus is also the year’s first supermoon, meaning it will be exceptionally close to the Earth. Our hopes and intentions get an extra burst of mojo from above, at a time when they could really use it!

This disarming naiveté is also why Aries people are so fearless.

How 2021 Will Be The Best year For Your Zodiac Sign, Per Astrology

The Most Ambitious Zodiac Signs In March 2021

These 4 Zodiac Signs Love Wearing All Black, Because It’s Truly The Deadliest Color

The Definition Of Great S*x According To Your Zodiac Sign

THIS IS WHY YOU SHOULDN’T LET THAT GIRL GO

April 2020 Will Be An Exciting Month, Testing Your Senses In...

ThoughtCatalogs - April 15, 2020 0
The month that started today will be quite an exciting one. The planet Mercury is going retrograde on the 5th of April , and...