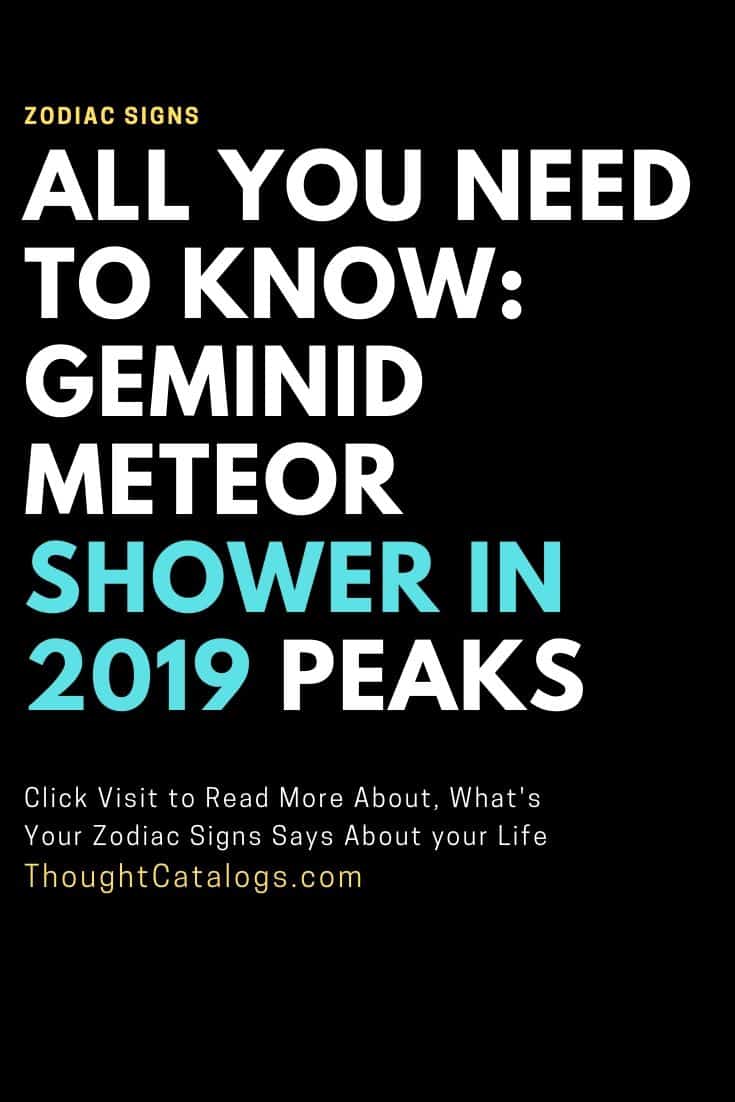 The peak of the Geminid meteor shower is coming up on between  December 13 and 14.

The Geminid meteor shower – always a highlight of the meteor year – will peak around the mornings of December 13 and 14, 2019. The Geminids are a very reliable shower if you watch at the peak time of night (centered on about 2 a.m. for all parts of the globe) and if you watch in a dark sky. The meteors tend to be bold, white and quick. This shower favors Earth’s Northern Hemisphere, but it’s visible from the Southern Hemisphere, too. The curious rock comet called 3200 Phaethon is the parent body of this shower.

On a dark night, near the peak, you can often catch 50 or more meteors per hour.

Special equipment? None needed. Just find a dark, open sky and maybe bring a sleeping bag to keep warm. Plan to sprawl back in a hammock, lawn chair, pile of hay or blanket on the ground.

Lie down in comfort, and look upward.

This Geminids’ radiant point nearly coincides with the bright star Castor in Gemini. That’s a chance alignment, of course, as Castor lies about 52 light-years away while these meteors burn up in the upper atmosphere, some 60 miles (100 km) above Earth’s surface.

Castor is noticeably near another bright star, the golden star Pollux of Gemini. It’s fun to spot them, but you don’t need to find a meteor shower’s radiant point to see these meteors.

Instead, meteors in annual showers appear in all parts of the sky. It’s even possible to have your back to the constellation Gemini and see a Geminid meteor fly by.

When you’re meteor-watching, it’s good to bring along a buddy. Then two of you can watch in different directions. When someone sees one, call out “meteor!” This technique will let you see more meteors than one person watching alone will see.

Be sure to give yourself at least an hour of observing time. It takes about 20 minutes for your eyes to adapt to the dark.

Be aware that meteors often come in spurts, interspersed with lulls.

Earthgrazers possible possible at early evening. Okay, we said you’ll likely see the most meteors at a time of night centered around 2 a.m. You won’t see as many Geminid meteors in early evening, when the constellation Gemini sits close to the eastern horizon.

But the evening hours are the best time to try to catch an earthgrazer meteor.

An earthgrazer is a slow-moving, long-lasting meteor that travels horizontally across the sky.

Earthgrazers are rarely seen but prove to be especially memorable, if you should be lucky enough to catch one.

Geminid’s parent – 3200 Phaethon – is a “rock comet.” Every year, in December, our planet Earth crosses the orbital path of an object called 3200 Phaethon, a mysterious body that is sometimes referred to as a rock comet. The debris shed by 3200 Phaethon crashes into Earth’s upper atmosphere at some 80,000 miles (130,000 km) per hour, to vaporize as colorful Geminid meteors.

In periods of 1.43 years, this small 5-kilometer (3-mile) wide asteroid-type object swings extremely close to the sun (to within one-third of Mercury’s distance), at which juncture intense thermal fracturing causes it to shed yet more rubble into its orbital stream.

There was big excitement about 3200 Phaethon in 2018, because this object was exceedingly nearby around nights of the Geminid meteor shower’s peak. It swept to within 6.4 million miles (10.3 million km, 26 lunar-distances) on December 16, 2018. In 2019, 2300 Phaethon is much farther away. Click here to know 3200 Phaethon’s present distance from the Earth and sun.

Bottom line: Meteor showers are part of nature and so inherently unpredictable. But the reliable Geminid shower counts as one of the year’s best, peppering the nighttime sky with 50-120 meteors per hour at its peak.

It Hurts Like Hell, But I Don’t Want You Back

Pick A Partner Who Will Catch You When You Fall

Your January 2020 Horoscope: It’s Time To Take Charge Of Your Life

ThoughtCatalogs - April 23, 2020 0
ARIES MARCH 21 TO APRIL 19 In a Nutshell… Over the last 6-7 years, you Rams have seen your lives transform radically. You’re limbered up and ready...