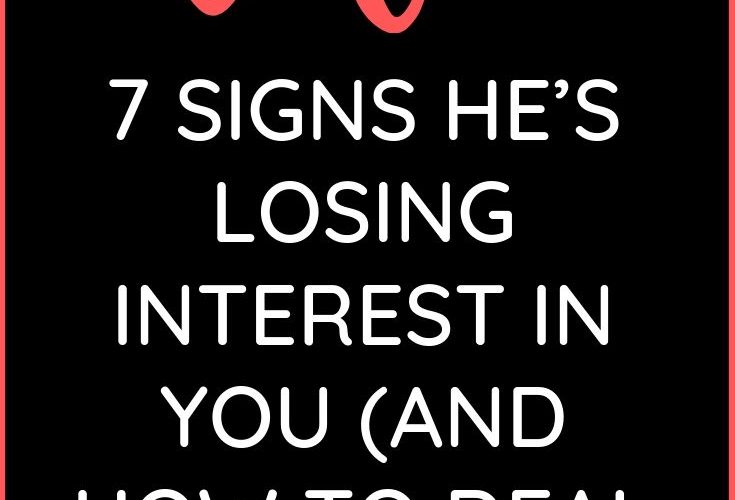 There is no worse feeling in the world than the one of feeling unwanted and rejected. It makes you wonder what you did to deserve it. He liked you in the beginning, so why do you see all the signs he’s losing interest in you all of a sudden? Was it you, or was it just him? Or was it just supposed to happen?

This can happen to any of us; even the strongest relationships and the ones you thought would last forever can fall apart just because a guy loses interest suddenly. And this hurts so badly. Even if you didn’t like him that much, it hurts you because someone felt that he didn’t want you.

What happens next is that most women just can’t accept the fact that a guy is slowly starting to lose interest and they should both move on with their lives, especially those women who didn’t even like him that much to begin with. As I said, it hurts your ego and you want to get to the bottom of it to find out why he lost interest.

Then we become mildly obsessed with him and although we know we are probably wasting our time trying to get him back, we don’t give up. The reasoning here is simple. If we manage to get him back, he won’t be that interesting once we have him again and we will go back to not liking him that much, but if we don’t get him back, then we end up hurt and sad and with a lot of wasted time on our hands.

However, when you read the clear signs that he’s losing interest in you and you really and genuinely like him, it’s a completely different thing. You’ll want to give all you’ve got to get him back. You’re going to try so hard because you really care about him and you don’t want to lose him.

When you see him distancing from you, you are going to bring out the big guns. You’ll probably pay more attention to the way you look, as you’ll be trying to engage in his life more and be there for him in general. But that doesn’t always work and especially not if he’s making you feel like crap by pushing you away.

Even if you confront him about it, he won’t tell you a thing, but his behavior will clearly present the signs he’s losing interest in you. But don’t beat yourself up too hard because there are ways to spot this while it’s not too late to do something about it, although you have to know that there is no guarantee that it will work because sometimes they just want to leave. While this will hurt you, you’ll get over it. When you think about it, it probably had to happen. Maybe years later you would regret ever staying with him, so it’s better this way. Or maybe your plan will work and he will see what a fool he has been with a little help from you and you both live happily ever after.

Either way, if you think your relationship is worth saving, keep on reading to get to the root of the problem.

What are the signs he’s losing interest in you?

This is the easiest thing for him to do, to ghost you, if he feels that things are not like they used to be, or if he has found someone else he likes, he will slowly cut off all contact with you. If you really like him, you will probably turn a blind eye to this because you won’t want to face it, but the bottom line here is that if he doesn’t contact you for a few days, he has probably lost interest in you.

Solution: This one is pretty straightforward. ‘I don’t like you, I don’t want to hear from you.’ But don’t lose your dignity when this happens. Sometimes there is nothing you can do except accept things for how they are. Don’t embarrass yourself with texting him any further. Just stop it and move on.

2. The romance is dead

There is no more cuddling on the bed or when watching a movie together, and it doesn’t even have to be a romantic movie, just as long as you are together. He doesn’t surprise you anymore with little things, like he used to. He’s slowly distancing himself from you and you have no idea why. Even the sex isn’t as frequent as before. It means he doesn’t want to be emotionally close to you. Nevertheless, it’s an alarming sign that something is just not right.

Solution: It’s completely normal that a relationship loses its spark after the honeymoon phase is over. But that doesn’t have to mean that the relationship is over. You have to try to make things better. Plan your date nights and movie marathons to remind him of the times before all the problems started happening. Keep the spark alive.

3. He interrupts you when you’re talking

This doesn’t even have to happen when you are talking about something really important, it can be just as hurtful when you’re chatting about your day. So he will tell you everything about how he has spent his day, he talks about all the situations he has experienced, but when it’s your turn to talk, he cuts you off after a minute, remembering he has something to do. And even when he’s done and you meet up again, he does the same thing to you. This means that he is not interested in what you’ve got to say which means he’s lost interest in you in general.

Solution: Whenever you find yourself in a situation like this, try to fight for your right to speak your mind. Don’t let him interrupt you and even if he does and you meet up again, pick up where you left off, telling him on purpose that you didn’t get to finish saying what you wanted to say. If this doesn’t give him a clue that you are irritated with the way he is behaving, talk to him and let him know that his actions are hurtful. Be upfront and ask him what he wants from you. If he dodges this conversation too, you should have nothing to do with him, so cut short the inevitable misery and leave him.

Let’s just say that you are no longer his priority. At the beginning, he wanted to do everything for you. He was helpful and he cared about you, so he didn’t want you to do all the work by yourself. But now, all of a sudden, he has too much work to do to help you. I’m not saying that he has to change his life and be your errand boy, but a little help would be nice from time to time. And the most important thing to notice here is that he always has excuses for the things he didn’t do and he makes excuses because he doesn’t want to do them and not just because he can’t.

Solution: Try to stop doing things too, to see how he likes it. Start making excuses like he does. Maybe this will give him a hint that he is acting like a total jerk. Let him have a taste of his own medicine and he will probably change the way he is acting. If that fails, then leave him because he will never change.

5. He is angry all the time

He seems to be annoyed with everything you do and pretty much everything you say. Nothing you do suits him and he loses it in a second. First of all, you have to understand that this isn’t your fault, he is doing this because he is not satisfied with his life and he probably doesn’t know what to do about it. He cannot control his thoughts because he doesn’t know what he wants and that’s why he gets annoyed at every little thing you say.

Solution: The best thing to do in this situation is to keep your cool and not to react immediately to his behavior. Leave him to cool off a bit and then sit him down and try to talk to him calmly and rationally about what’s bothering you. Tell him that there’s no point in fighting over things which are not that important and that his reactions are too dramatic. Tell him to share with you what’s really wrong and try to find the solution to the real problem together.

6. He stopped talking about the future

This is truly a real red flag for the happiness of your relationship. At the beginning, he used to talk about your future plans, like things you were going to do, or where you were going to live, or even how many children you were going to have. But now, all that talk has suddenly stopped and you see him pulling away from you. He doesn’t want to commit to you for the long-term and he uses ‘I’ a lot more often than ‘we’.

Solution: There is a perfect way to figure this one out on the spot. Just be straightforward and ask him to do something big like meeting your parents or going on a long vacation. If he gets all weird about it or tries to change the subject, he probably doesn’t see himself with you for the long haul. This is a definite sign he’s not interested in you anymore.

7. He doesn’t show you support

Supporting your partner is extremely difficult because sometimes you just don’t have the strength or understanding to support someone else. Sometimes you can be a bit selfish and put your own problems before your partner’s but his behavior shows that he doesn’t care that much for you because he chooses to put his needs before your own every time and you don’t feel any kind of support. When you have a problem or something is bugging you, you want your partner to be by your side, if not to help then to just be there so you know you’re not alone. He used to do that, but not anymore. Now he’s prioritizing himself and is looking for the things that will benefit him instead of the both of you.

Solution: It is okay to put up with this and take it for some time, but if you feel unsupported then ou also feel unloved and disrespected. If you feel that way it’s clear that your relationship is going nowhere.
Put up with his behavior for a while and try not to show him that it bothers you. If he doesn’t change, leave him because frankly, you deserve someone who will move mountains for you and not someone who will try to move them by putting no effort whatsoever in and then just give up, and in the end saying there was nothing he could do. But, there was plenty. 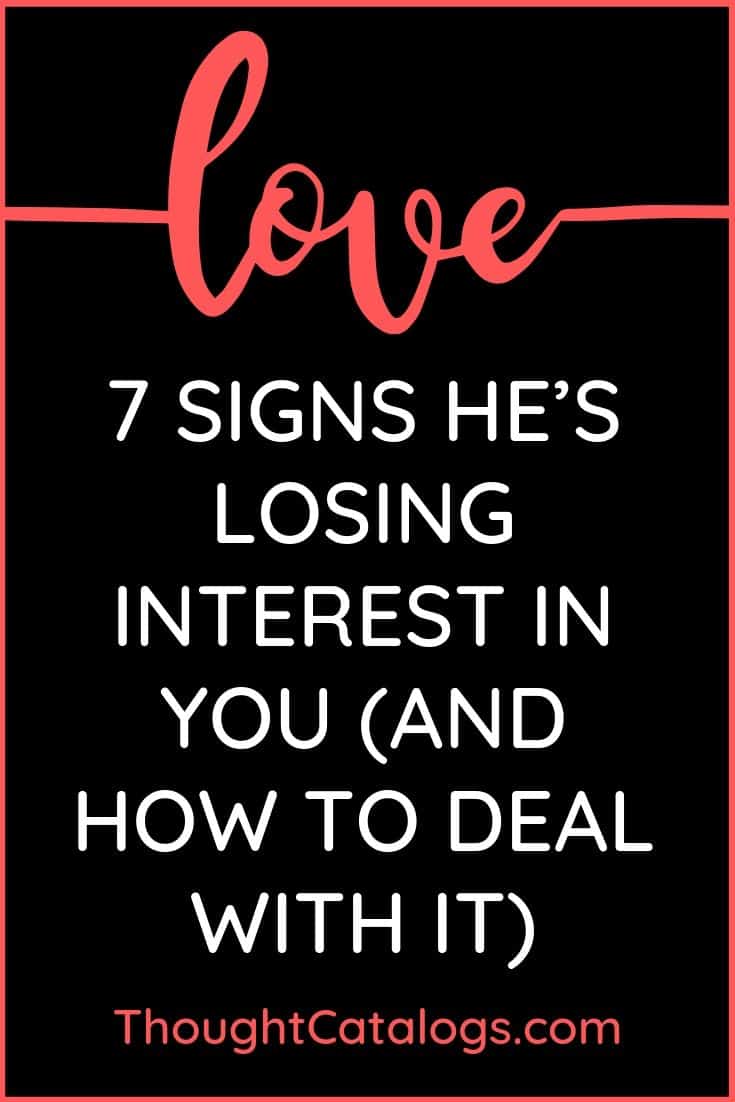 When Love Decides To Leave, Let It Go