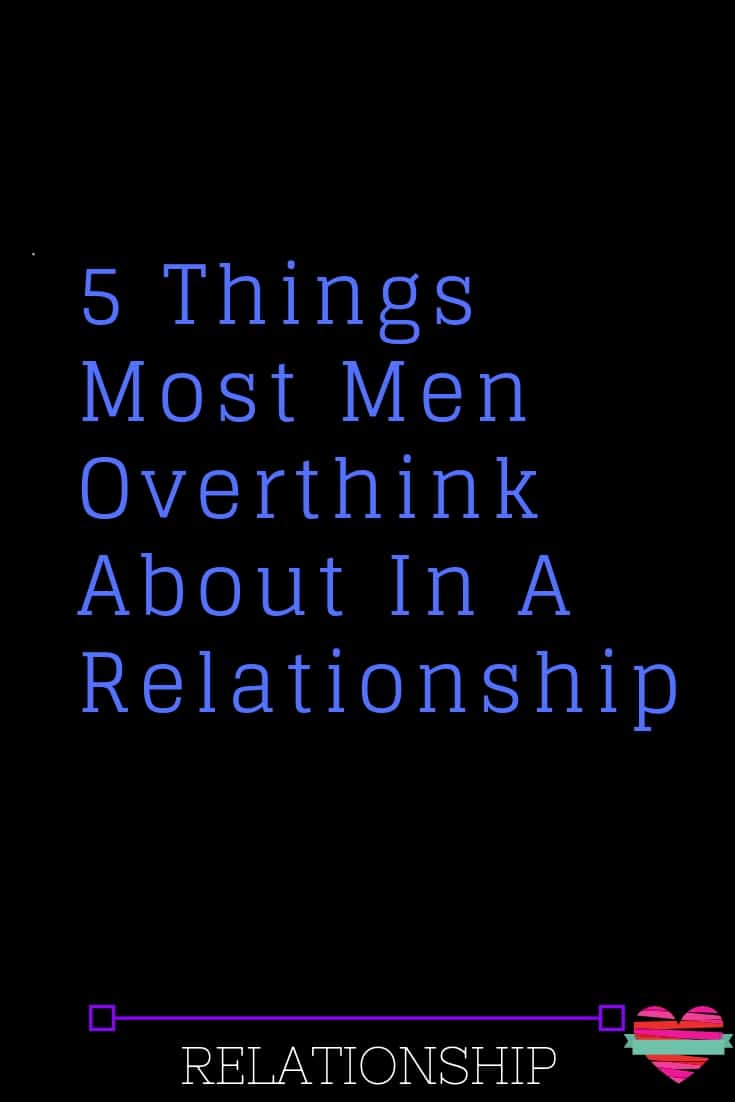 Facebook
Twitter
Pinterest
WhatsApp
Despite common opinion, women are not the only ones who overthink. Men can also feel insecure and wonder if they are enough for the person they love. They also analyze and worry about many things when they are in a relationship—they are just better at hiding it. Here are the 5 most common things almost every man overthinks about in a relationship, even though he’ll never admit it.

1. Comparing himself to your ex

One of the fears all men have is that their girlfriend only sees them as a rebound relationship and that she still loves her ex. And this is especially the case at the start of the relationship. He wonders if you are with him just to get over someone from your past or to make your ex jealous. Do you have some emotional baggage that might ruin your future relationship? The fact is that he’ll secretly want to know all about your ex and the relationship the two of you had. He overthinks about the love you felt for your ex and the love you’ll feel for him. Do you have someone from the past who you think was your soulmate and will he ever take his place in your heart? Even though he probably won’t show it to you, it is likely that your current boyfriend will try to find out as much as possible about all of your exes because he feels threatened by them. He feels insecure thinking that they were better than him in one way or another or that he’ll never make you feel the way they did.

Many guys connect their value as men exclusively to sex. Your boyfriend’s sexual performance and the fact that he is a stud in the sheets are what he thinks determine his masculinity. That is why every man wants to impress you in bed and do his best to show you all of his skills, especially at the beginning of the relationship. But all of this desire to be as good as possible creates a huge amount of pressure for them and usually makes them underperform. And this is something every man is afraid of going through and something which stresses them out. When a guy falls for you, he’ll think about how he’ll turn out to be before sex happens and he’ll overthink about if he pleased you the right way once it’s over. Even though you should definitely always tell your boyfriend what works for you and work on improving your sex life, make sure you don’t openly criticize him. And even if you are doing so, do it gently. If you see that he is trying hard to satisfy you, make sure to not crush his ego by implying that he is lousy in bed.

When you start a new relationship, you don’t see each other’s flaws and imperfections. Nothing annoys you about your partner because the butterflies in your stomach consume you completely. But how do you keep this spark alive? What can he do to make you keep falling in love with him every day? How can he keep you interested? Will he always have the ability to make you laugh and to put a smile on your face? And what happens when the spark dies out? What happens when the butterflies are gone? Does that mean that your relationship will be doomed to fail? Will you like what you see, once you start looking at him clearly? Or will he be the one who will want to escape the relationship once this happens? These are just some of the things most men overthink about when they are in a relationship because if they care about you, they feel responsible to keep seducing you.

One of the things almost every guy fears is being less of a man the moment he falls in love and the moment he starts showing that love. At the beginning of the relationship, they are always torn between playing hard to get and risking being too clingy. Will loving you make him lose himself? Will he feel trapped and caged in this relationship after a while? Will he become too vulnerable and will he lose his masculine side if he opens up to you too much?   Should he be completely honest about his feelings for you or should he act like a tough guy? Should he spoil you or show you that you are not in charge? Which approach will make you fall for him more and let him keep his personality intact?

Is he really the man for you? Can he meet all of your needs? Could you do better? Would you replace him with some better looking or more successful guy with more money? Are you settling for less with him? Are you with him just not to be alone and because he is convenient or is he the man you want to be with? Do you think of your relationship as a meaningless fling or can you see a future for the two of you together? This might come as a shock to you but these are all the questions that are going through your boyfriend’s mind and which keep him up at night, even though he’ll probably never admit it.

7 THINGS TO DO AFTER YOU CATCH HIM CHEATING

How Astrology Replies To Your Routine Questions Easily In 2021

Here Are The 4 Most Passionate Astrology Signs – Are You One Of Them?

UNIQUE ROMANTIC GESTURES TO WIN OVER EACH ZODIAC SIGN in 2020

Forgive Yourself For All The Wrong Men You Loved

ThoughtCatalogs - January 4, 2020 0
Let’s be honest. When you look at your dating history, you can’t help but notice that you’ve had some, to say at least, shitty...