Facebook Twitter LinkedIn Tumblr Pinterest Reddit VKontakte Odnoklassniki
We’re not proud to admit it,  but it can be way easier to break up with someoneby leaning into clichés than having an intensely personal heart-to-heart with them. Not sure about your current relationship? Scroll down to your zodiac sign below to find out which go-to breakup excuse you’re most likely to use.Related: North Pole Snow Marshmallow Bites Volume 0%

Aries is a fiery and passionate sign, but sometimes their intense feelings for someone will flare before quickly fizzling out. You seek thrills and love the chase before a relationship begins, but can get bored easily once things are made official. Sometimes, this excuse simply means that you want to move on, but other times, it can mean you’ve already set your sights on someone else.

Taurus knows what they like, and they won’t settle for anything else. You don’t want to be with someone unless you know in your heart of hearts that they’re the right person for you. You need your partner to be dependable and fashionable, and preferably in a position to pamper you. If you’re not feeling it and don’t think you can spend the rest of your life with someone, you’re more than happy to nip the relationship in the bud.

Social Gemini treasures their friends above all else, which is why they would sometimes prefer to keep things friendly, rather than more serious. You’d be besties with every person on campus if that was possible, and sometimes a relationship can get in the way of that. Sometimes, you prefer to maintain the status quo, and you’re not willing to make waves in your social circles just yet.

Cancer is an intuitive and spiritual sign who often consults their daily horoscope or pulls an angel card when they’re in the process of making an important decision. Before you jump into a big relationship, chances are you check to see how compatible your signs are, and if things don’t look good, you probably don’t pursue it further. You’re an emotional person, so why expose yourself to almost guaranteed heartbreak?

Leo is outgoing and gregarious, but they also have powerful egos and tend to think they’re the center of the universe. When you say, “It’s not you, it’s me,” you mean it. Maybe you need more out of the relationship, or you need to be on your own for a bit, or you’re just ready to move on, but chances are if they did something to instigate the breakup, they’ll never know what it was. You’re more than happy to take the heat for whatever happens next, because you like when things are all about you.

(The Kissing Booth via Netflix)

Virgo is an analytical planner who’s always thinking about the future and what’s next for them, so they take their relationships pretty seriously. The moment that you realize you and your S.O. are on totally different trajectories and that you don’t actually have a future together, you’re happy to put a stop to it. You have no time for investing in something that you know will end, and you have no qualms about saying so.

Libra is the sign of balance, and they spend a lot of time thinking about justice and ensuring that everyone gets what they deserve. In ensuring that everything is fair, you often forget about yourself, making the relationship one-sided by always trying to give your S.O. what they want. You might even start to think that you’re not good enough for them, making assumptions about what they want and need without actually asking them. In an effort to be selfless, you can sometimes demonstrate your own lack of confidence in the partnership.

Scorpio tends to be the loner sign of the zodiac. You don’t open up easily, and even when a relationship becomes important to you, you can find all of the affection and hanging out absolutely smothering. You know that it will never work out if the other person makes it a priority to be together all the time, and you want to set boundaries and break things off before it’s too late to turn back.

Sagittarius is an adventurous optimist who believes things can always be better. In relationships, that can get you in trouble because it means that there always might be someone out there who’s better for you than the person you’re with. You tend to avoid commitments and keep things casual so that nobody gets hurt, but your constant search for something larger may prevent you from seeing what’s right in front of you.

Workaholic Capricorns tend to overcommit themselves to whatever responsibilities get thrown at them, and things can get tricky when a relationship is thrown into the mix. Unfortunately, your relationship can be the straw that broke the camel’s back, tipping your schedule into unmanageability. You pride yourself in the ability to do everything, and sometimes the one thing that has to go will be your S.O. One quick look at your agenda, and they’ll have a tough time arguing with you.

Aquarius deeply values their freedom and independence, and as much as they enjoy companionship, they’re the last sign that wants to miss out on privileges of single life. Being with someone occasionally means making sacrifices, and unless you’re extremely dedicated to someone, you’re not about that life. Relationships are work, and you might not be ready for one for a while.

Pisces is typically a laidback and daydreamy sign who’s willing to go with the flow, but at some point, they might realize that they’ve gone along with things for too long. You’re a giving person, and sometimes you might find that you let a relationship happen to you, rather than actively taking a part in it. When that happens, you might retreat into yourself in an effort to figure out who you really are. 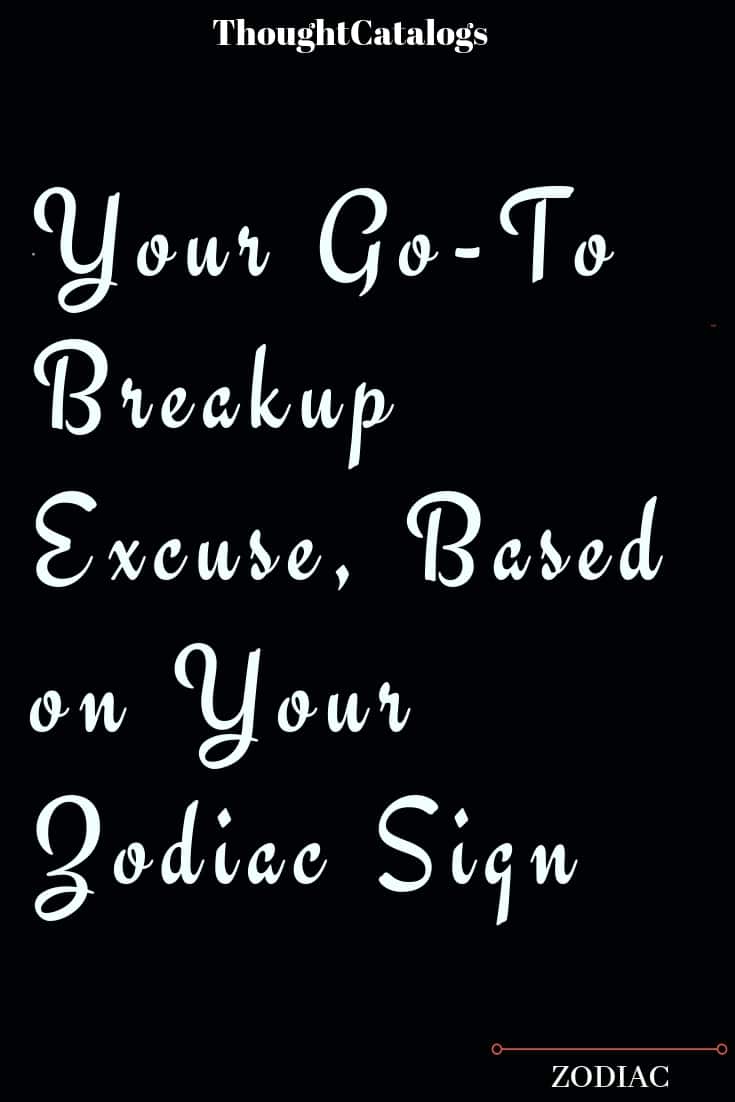 The Superficial Thing You Look for in an S.O., Based on Your Zodiac Sign