No, I won’t sit at the top of the stairs with my arms crossed sulking! I’m not a child anymore. I won’t ignore you because I don’t like you. I won’t play games with anyone. I outgrew that period of my life. I’m much smarter, much more mature now.

I remember one time when I was still a child, my mom refused to buy me a doll. Maybe she didn’t have enough money, maybe I didn’t deserve it. Anyway, she told me NO. Of course, like every child, I climbed the stairs to my bedroom and I plonked myself on them in defiance.

I was hurt, because not getting a doll is a huge problem when you’re just a little girl. I could as easily go to my room and suffer in silence, but no, I chose to sit at the top of the stairs so my mom could see me and my pain.

I was ignoring her, I was pretending to be alone, hurting because I didn’t get what I wanted. Of course, the next thing that happened was, I got a doll. My mom couldn’t stand to watch me like that.

But things don’t work that way anymore. I can’t get what I want by being unavailable to everyone, by ignoring everyone. And most importantly, I shouldn’t. It isn’t right.

Now the time’s come to grow up, and I’ve decided something.

I’m really so fucking tired of always being there for everyone who needs me, no matter if they deserve it or not. I’m so fucking angry with myself for ignoring my life to please someone else.

What happens when I need help, when I can’t take it anymore because I’m bursting at the seams, about to explode. What about my free time, my walks in nature, my place under the sun?

He was always feeling down; he always had problems. Nothing in his life could ever be good, let alone great. That’s when I realized something…

Do I not have the luxury to stop and think about myself for a while? Does it always have to be about someone else?

You know, I’m a fighter. I walk through life and I never break under pressure. I always strive to do more and accomplish more. Success gives me the boost I need and successfully completed challenges make me who I am.

I can take down anyone and anything if I want because I’m not a quitter. So why would I waste my time and energy on someone who doesn’t give a fuck? On someone who never bothered to ask themselves how other people around them feel?

That’s why I decided to learn to be unavailable. But unavailable only to the people who suck me dry, those who drain my energy and make me feel like a piece of shit.

I realized that an important key to a happy life is to remove all people who make you feel bad. To keep them as far away as possible. I realized that I don’t need anyone to walk into my life, make it pretty at the beginning, and after they make a mess, leave.

I don’t have to, and I won’t feel down and broken just because someone decided they have the right to play with my feelings and then leave.

I’ve learned in time and I’ve experienced what it feels like to be surrounded by people who don’t care whether they lose you or not. It took me a lot of time and tears to come to this realization, but I thank God I did.

I learned to let them go and break the cycle of them coming back in my life.

I learned to become unavailable, because that is the only way to break the pattern of welcoming unnecessary people in my life and letting them make chaos, only to leave afterward.

I became selectively unavailable because I’ve realized that my life will never change if I don’t change it myself. I learned that by being unavailable, I’m making myself more available to the people who truly deserve it. 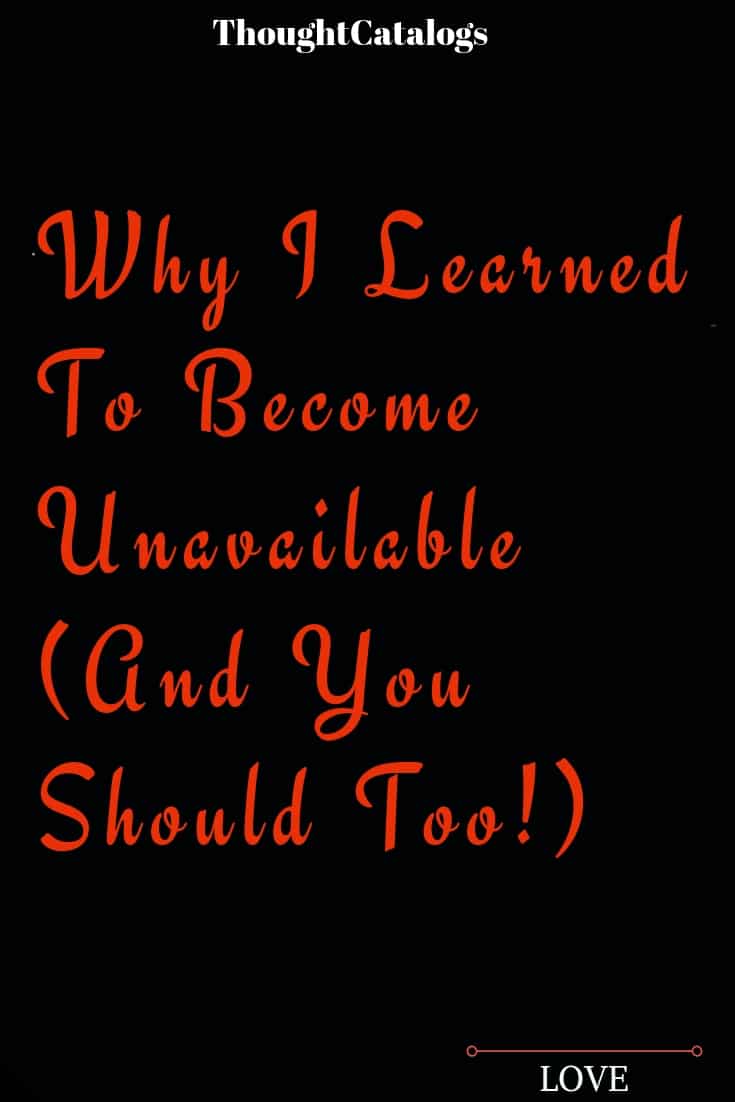