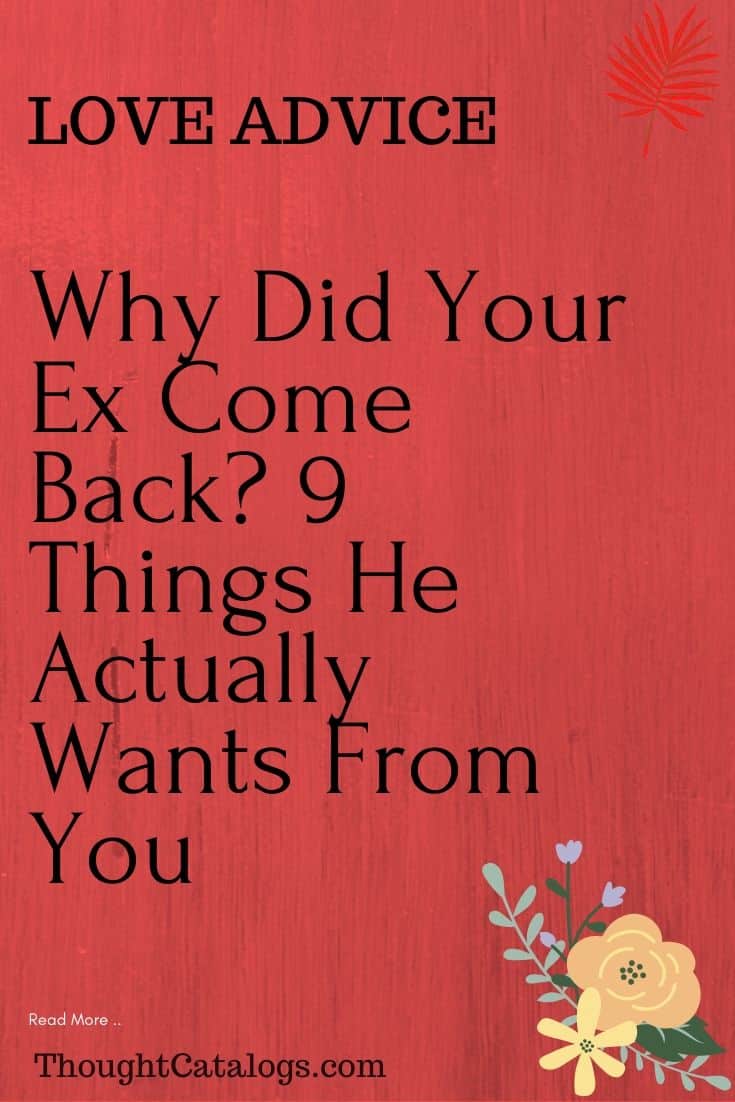 I think this is a familiar story to all girls; exes coming back into our lives. Right when you have found your inner peace after the break-up, he comes back to mess with you again.

He was the one who decided to leave and now he has come back and wants to continue as though nothing happened.

Maybe you still love him and still feel that he is your soulmate. Maybe you got over him and the only thing you now feel for him is anger or disappointment.

Either way, you are taken aback and you don’t know what to do or how to behave.

You are confused because you don’t know whether he is back because he loves you or if there is something else behind his new decision.

Unfortunately, you have every right to doubt his attention.

Sometimes an ex comes back for all the wrong reasons and they can hurt you again, even more than the first time.

Only you know how painful your healing was. Be careful, don’t let him fool you and break your heart twice.

1. He wants to prove that he can be with you whenever he wants

He thinks you love him more than life itself. He thinks that he can leave you whenever he wants and that you’ll always be there waiting for him.

Whatever he does, he thinks you’ll be there to forgive him and welcome him back because your love is blind. He thinks that your love is unconditional and that you won’t stop loving him no matter what.

If he appears on your front door in the middle of the night, don’t let him in. Shut the door in his face. Shut all the doors to your heart from him.

It will be hard but it’s necessary. Show him that no matter how much you love him, you won’t be always there for him, as an option. You deserve to be a priority.

2. You were his backup plan

He met someone new while you were dating and that’s the real reason why he broke up with you. He wanted to date that other person but also he left some unfinished business between you two.

He did that because he wanted to come back to you if his relationship with the other woman failed. And now he is back and expects that you’ll give him another chance.

He’ll try to fool you with some sweet words. He’ll be telling you how your love was the best thing that ever happened to him.

Of course it is but he didn’t need some other woman to make him realize it.

Trust me darling, the one who’ll behave like you are the only woman on the earth will come and he’ll be all you ever needed.

All of his friends are busy with their jobs and their significant others, and he soon realizes that you were the only one who always had time for him; that’s why he decides to come back to you.

Be careful, he hasn’t come back because he realized that he loves you, the only reason for it is that he doesn’t like the feeling of loneliness and he knows that you were the only one who was always there for him.

He’ll probably tell you that you are the only person who understands him or can make him happy but don’t fall for that. That loneliness is his fault and now let him deal with it.

4. He misses the physical intimacy

Even though he isn’t in love with you anymore, he misses the intimate side of the relationship.

I don’t mean he only wants to have sex with you but he misses your late-night cuddles, your goodnight and good morning kisses. He misses laying his head on your lap while playing games.

He even misses holding hands in public, which was something he hated the most while you were dating.

You made him feel special and no one else can make him feel that way; that is what he misses the most.

5. His friends and family told him that he lost a keeper

While you were dating, you earned the trust and respect of his family and friends. You believed that you were going to stay together forever and you treated them like your own family.

Maybe you are still in touch with some of his friends and family members and they are still on your side because they know that he won’t find a woman like you.

Those are the people he loves and trusts the most and their opinions are very important to him.

He may come back only because they have pressured him to do that and he may be confused with all of it. Don’t let that happen. You will be in a relationship with him, not them.

He doesn’t love you and it’s not going to change.

Remember, nothing is worth it if neither of you is happy in a relationship.

6. The feeling of guilt

I know you are hurting but be brave; it’s a part of the healing process. Maybe it’ll take a little longer than you expected but hang in there.

Do whatever you feel that you need to do. Cry, don’t leave the house for days but please, never claim the role of a victim. Don’t use guilt to manipulate him into coming back to you.

Don’t send him messages about how you are thinking about hurting yourself because of the break-up.

He may come back but he’ll leave as soon as he understands what kind of game you are playing. Nobody likes to be manipulated.

7. He sees that you have moved on

He moved on the minute he broke up with you, and you have every right to do the same. Give yourself time to heal and move on with your life as if nothing happened.

He’ll be surprised when he sees you happy again, when he understands that you can enjoy life without him.

He thought that you’d never move on because you’ll love him and wait for him forever. And that’s why he can’t stand the fact that you have moved on.

Now he has started to want you more than ever before. Men like strong women and most of all, they like what they can’t have. And you moving on means that he can’t have you anymore.

He’ll try to win you over again but be careful about giving him a second chance.

This is something that drives men absolutely crazy every time after a break-up. He can’t stand to see you with another man.

He left you but he didn’t think that you would be able to fall in love again.

Seeing how happy you are with a new guy, and those little sparks in your eyes when he is talking to you, is slowly killing your ex.

He immediately becomes nostalgic and remembers how you looked at him the same way and how happy that guy actually is to have someone looking at him with so much love.

9. He misses your unselfish love

He has come back because he is aware of your love and how unselfish and unconditional it was. He is now aware of all your affections toward him.

Maybe he did try dating after your break-up but it only made him realize that no one would ever love him the way you did.

He misses someone who was there for him in the middle of the night. Who supported him in all of his unrealistic plans. Who loved him no matter what.

Now that he has lost you, he has lost all of that and it made him realize that you are a once-in-a-lifetime girl.

Let the pain teach you a lesson. Remember who hurt you. Let the pain change you and make you stronger.

Always know your worth. Focus on the future only and leave him in the past. You are the center of your world and the relationship with yourself is the most important one in your life.

He had to lose you in order to realize how much you are worth. Now let him regret this all of his life because he was stupid enough to leave a unique woman like you.

How The June 2021 Full Moon Will Affect You, Based On Your Zodiac Sign

THE BIGGEST LIFE-CHANGING SURPRISE WAITING FOR YOU IN 2020, ACCORDING TO YOUR ZODIAC SIGN

Cancerians Have Such Control Of Imagery, And Their Moods Are So Intense, They Can Make You Feel Them, Too.

If He Does These 6 Things, He Doesn’t Want To Date You – He Just Wants To Keep You Interested

ThoughtCatalogs - April 21, 2019 0
As the year winds down, it’s only natural to consider where you stand with your significant other. Maybe you two have a super romantic...