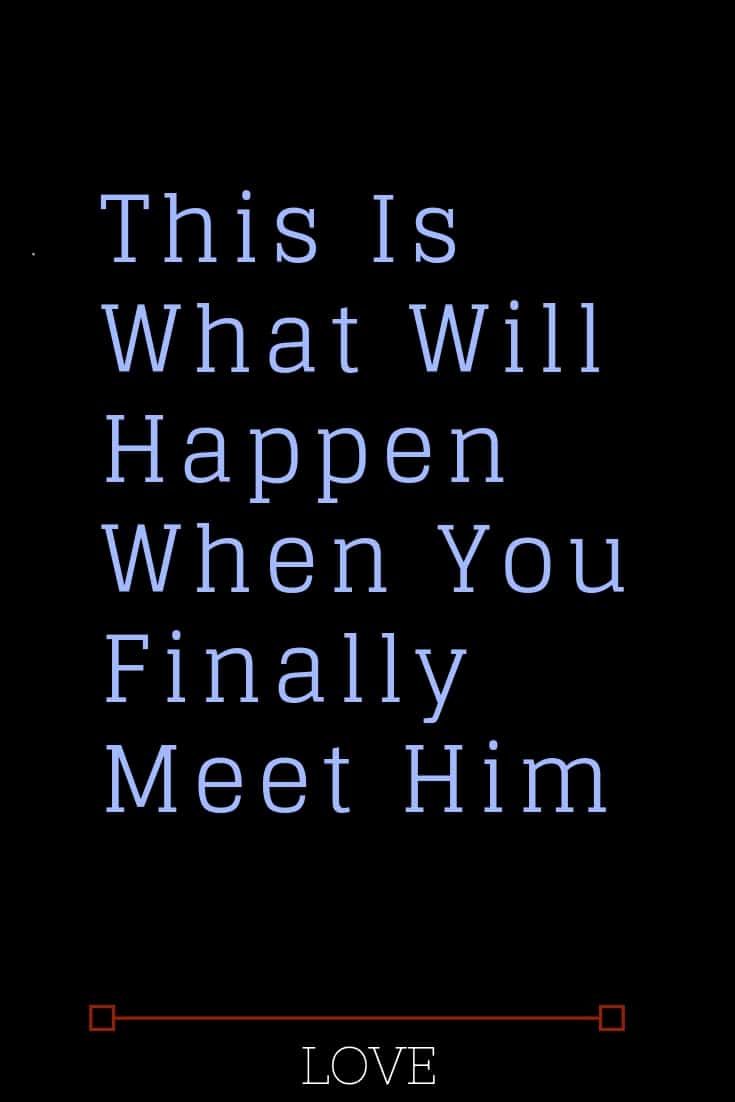 Facebook
Twitter
Pinterest
WhatsApp
Linkedin
ReddIt
Tumblr
Flip
Copy URL
When you see him, you’ll just know that he is the man you’ve been waiting for your whole life. When you touch him, you’ll know that that is the touch you want to feel for the rest of your life. You’ll just know this is the love you’ve been waiting for. He will pay attention to you and listen carefully to everything you’ve got to say. He won’t fake interest because he is not interested in a fake relationship. An unexplainable connection will happen between the two of you, and you’ll spend hours and hours together talking, laughing and getting to know each other, and you won’t have enough if it. Your flaws and your quirks will be those weird little things he loves about you. He won’t try to change them or make them go away. He’ll love you even more because of them. He’ll love you even more because you are unique. You are one of a kind.   He’ll fall in love with your intelligence, your beautiful soul and the person you are. That’s true love. It never judges. It just is. You’ll see how respectful and kind he is. You’ll see it when you look at how he acts, and you’ll hear it when you listen to him talk. He will never do anything to disrespect you or anyone else. You’ll get to know each other slowly, and you’ll enjoy each other’s company. Texting him and calling him will become a usual part of your every day. And when you don’t hear from him, you’ll feel like something’s missing. You’ll feel empty. No, it’s not just one of those days. It’s the fact he is growing on you. You probably don’t love him yet, but you’re on your way to the love land. You’ve never met a man who listened to every word you’ve said, carefully taking in everything. You’ve never met a man who seems to be passionate about the things you’re passionate about. He is not trying to get close to you by faking interest. He is only being sincere. He’s being himself. Then, you’ll become friends. You’ll fully accept him in your life and from that point on, you won’t be able imagine your life without him in it. He’ll be there for you when you’re feeling down. He’ll give you a helping hand when you need one. Slowly, he’ll start choosing you over himself. Slowly, he will start making you a priority.   That won’t happen on purpose. He is probably not even aware of what he’s doing. He is not aware that he is falling in love with the love of his life. He will be there for you when you’re hurting to help you heal. He will be a true friend before he becomes a true love of your life. You will even get closer to each other. You’ll go to a whole different level of friendship—the level that represents a thin line between just love among friends and love for the rest of your lives. He’ll try to make you a better person. He’ll be there to erase all of your insecurities. He’ll know you like the back of his hand. He’ll know how you think and what you’re going to do. At some point, you’re going to realize that you love him. But, you didn’t just fall in love with him that moment. You’ll realize that you’ve loved him for a long time, but you needed to let things follow their natural course. You needed to let that love grow into something bigger, into something invincible. Now, that the time is right, you’ve realized that you love him more than anything else. You’re realized that you don’t want to live without that person in your life. He will be honest with you, and he’ll tell you what you need to change to be a better person, but he’ll never trick you into changing or manipulate you into thinking what he wants you to think. He loves and respects you too much to do that. He’ll help you grow because from that point on, you’re together. You’re one whole, and if you grow to be better, so will he. He will challenge you, and you’ll challenge him. Your success will be his own, too. He’ll be proud of you, and he’ll let everyone know what a woman he has by his side.   He’ll admit every time he’s wrong, and he’ll forgive you when you make a mistake because he knows that no one is perfect. He knows that everyone has to slip sometimes. The important thing is that you have to have someone by your side to catch you or help you get up. When you see what true love is, you’ll know that love was worth waiting for. You’ll know that all those heartbreaks and tears you’ve spilled weren’t in vain. You’ll know that every step you took and every decision you made led you to this moment. This perfect life. This perfect love. And even now, after so much time, never take him for granted. Love him as you loved him from the first day you met because that’s when your love started to grow—the first day your eyes locked.

This Is What You Need In A Relationship, Based On Your Enneagram Type