Every zodiac sign has their likes and dislikes. Even Sagittarius, who are known for their happy-go-lucky personality, have certain things they just can’t stand in other people. It’s pretty useless information to know what turns a Sag off—unless, of course, you’re crushin’ on a member of this adventurous sign. If you don’t want to scare away your new love interest before your relationship has even begun, keep scrolling for things you should never do around your Sagittarius crush.Related: Halston Dare Reveals the Meaning Behind Her Single ‘Something Special’

Sagittarius are all about freedom and independence. They have a deep desire to experience as much of the world as they can, and they don’t want to feel any outside pressure that would change their adventurous nature. It makes sense, then, that Sagittarius don’t take well to clingy people. Anyone who demands all their attention or needs constant support and encouragement will make them feel suffocated and stuck. Showing any sign of clingy behavior around your Sag crush is the No. 1 way to have them running for hills.

People born under the sign of Sagittarius deeply value honesty. As they’re nearly incapable of being dishonest themselves, they refuse to accept any sort of deception in other people. Lying in front of a Sagittarius, whether it’s a big or small untruth, will ruin their faith in you forever. Once they catch you in one lie, they’ll convince themselves that they’ll never be able to fully trust you. You can’t have a relationship without trust, so it’s better to just tell your Sag crush the truth, even when it’s the more difficult path.

Sagittarius is generally a very carefree and happy sign. They have a tendency to look on the optimistic side of things, and they don’t see much point in wallowing in self-pity or complaining about every little thing that goes wrong. If you’re having a big problem, they’re more than willing to listen, but whining about every minute detail of your day is guaranteed to turn them off. They love to laugh and have a good time. If you don’t portray the same carefree sense of joy, they’ll have no interest in pursuing you.

People born under Sagittarius have a tendency to be incredibly idealistic, portraying an almost child-like sense of enthusiasm. However, while they’re known for their cheerful demeanor and love of having a good time, they’re also deep thinkers. Their mind is often focused on philosophical problems and life’s bigger questions. They enjoy laughing and joking around, but they won’t take too kindly to anyone who refuses to take them seriously. Instead of laughing off their attempts at a sincere conversation, understand that they crave a meaningful intellectual connection just as much as a great sense of humor. Don’t devalue their thoughts and opinions—it won’t get you very far in building their affection towards you.

This one should go without saying. Sag is a zodiac sign that loves to travel. In fact they see exploring the world as their entire purpose in life. If you just want to remain friends, say anything you want about the trials and tribulations of travel. However, if you ever want your relationship to blossom into anything more, keep your negative travel opinions to yourself. Talking badly about their life’s passion will show your Sag crush that you two could never make it in a relationship, effectively ending things before they ever get a chance to really know you. 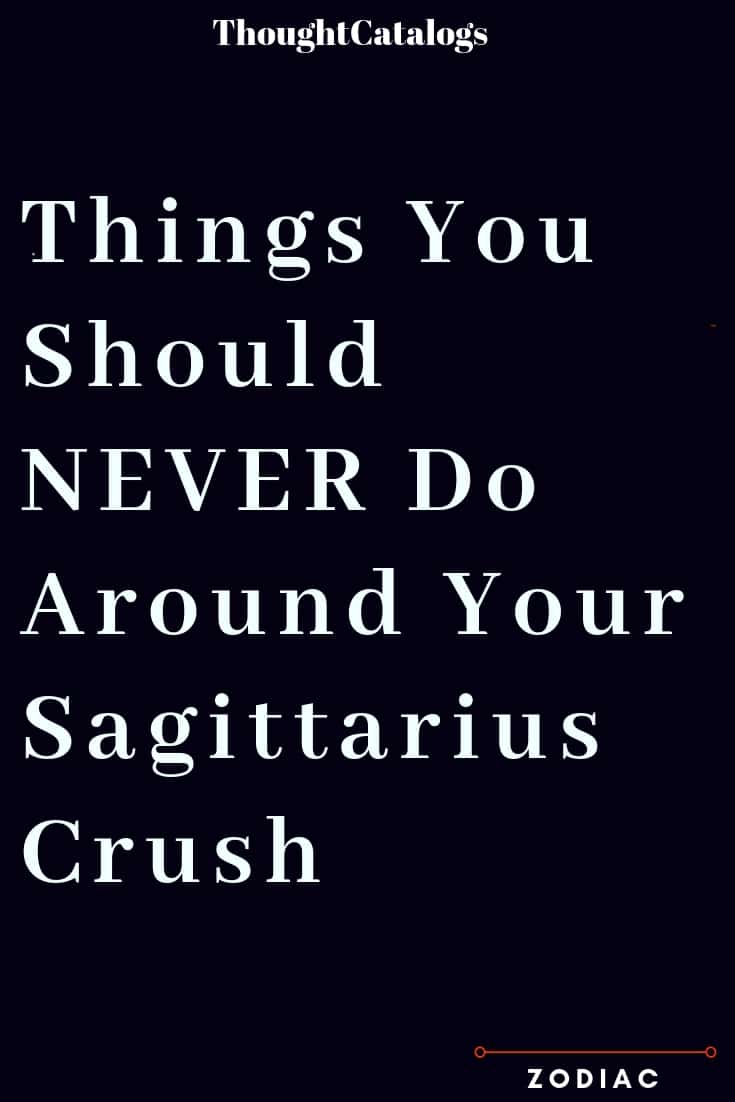 Here's How You Feel About Winter, Based on Your Zodiac Sign

I Don’t Need Expensive Gifts, Spoil Me With Loyalty

Featured Posts
What Kind Of Woman You Are Based On The Month You Were Born In?
17 hours ago