Whether they’re tipsy or totally drunk – each of the signs have different shenanigans that they get up to when they’ve been drinking. Some will become emboldened and turn into the life of the party whilst others wind up in the kitchen crying over drama. Read ahead and find out whether you’re a two-pot-screamer or still standing steady after a keg or three!

Aries: a crazy drunk that’s like an extra from an Indiana Jones movie.

This sign loves an alcoholic beverage and has the capacity to drink most of their friends under the table. The only problem is that – as risk takers – adrenaline usually kicks in at some point – and that’s when you suddenly find them walking a tightrope between two 20 story buildings. It also won’t be easy to talk them down because that would mean losing face. Try offering a bribe of one more drink! how to love an Aries and Secrets Things You Need To Know About An Aries

Taurus: bolt everything down and hide the crystal!

Taurus is usually a happy drunk and good fun to have around. They will also manage to still ensure that friends and family have a safe ride home or a shoulder to cry on. The only time a Taurus causes drunken chaos is when the inner dancer takes over – and the bull in the China shop is unleashed – arms and legs will rotate like cyclonic windmills. The bull has been known to take out an eye or smash a prized Ming vase when in the midst of a drunken dancing frenzy! Taurus Man Secrets: Put That Hot Taurus Man Under Your Spell

Cancer: messy and melancholy – but they will smile through the tears.

Cancer are not the tidiest of drunks and are fond of channeling their best Irish poet when hammered. They weep for lost friends and lovers but will also be philosophical and toast to new beginnings. They miss their home their dog, their first grade teacher and often lose their wallet and phone in a night of reminiscing. As Cancer gently rolls into a ball of drunken memories put a blanket over them – they’ll be fine in the morning. Here are some qualities of Cancer men and how you should treat them the right way.

Gemini: fine one minute – a walking disaster the next.

Gemini look like they’ve got everything under control, funny, talkative and steady on their feet – then suddenly – without warning they’re vomiting into a pot plant and talking gibberish. They are the “surprise” drunk at any function that leaves everyone wondering what happened. The Gemini drinking threshold is also unpredictable – sometimes it’s one glass and sometimes it’s a whole bar fridge! Be prepared for turbulence!  Gemini Man Flirts. But NOT if You Know The Secrets of HIM

Leo: not always the life of the party.

Just because zodiac royalty Leo can be flashy and loud it doesn’t follow that alcohol produces the same traits. Often they transform after a few drinks into introspective observers – keen not to lose control or act in a less than regal fashion. They are also prone to drunken sulkiness if not given the right amount of attention – if they’re in a bad mood – they can descend into hammered grumpiness.   Leo Man easy to get, but easy to Lose. “HOLD TIGHT” Know the SECRETS

Virgo: it’s not their drug of choice.

Virgos are not usually big drinkers – they don’t like the smell or the taste and would much prefer pharmaceuticals. They also have the worst hangovers of all the signs and you will hear about it for days. When they do imbibe their normal lack of tact can become full throttle and friendships may be lost. Best keep Virgo sober and looking after others.  Here are the secrets things that you should know about loving a Virgo

Libra: most likely to break out into drunken song.

The Libra personality love a bit of drunken Karaoke and somehow can manage to coax even the most anti social attendees into a round of tacky 90s hits. Infectious in their enthusiasm they can turn a dull event into the party of the year. The only down side is that, if fully tanked they become loose with their hands and lips – and spread the love a little too far. How to get a Libra Man fall for you

Alcohol loosens Scorpios tongue and sting and they transform into fabulous storytellers, weaving magical tales about themselves and friends. It’s not important if these stories are true just let Scorpio take you on a journey of the imagination. This sign is also able to elegantly pass out wherever they stand or lie – that’s when you know the party is finished.If you’re planning on dating a Scorpio then you should know the 15 Brutally Honest things about Scorpios.

Sagittarius: always the ones with a lampshade on their head.

Sagittarius are practical jokers that devise elaborate pranks when drunk to play on friends and family. Sometimes they do misjudge other people’s understanding of what actually constitutes for humor and end up in the dog house or a holding cell – just make sure you don’t join them!  You can also read our another Secrets things that make Sagittarius the most romantic partner ever

Capricorn: social drinkers who let their guard down after a few beverages.

The Capricorn sign loves a social drink or two and will be sure to touch base with everyone in the room about everything. They can indulge in a bit of grandstanding, when over the limit, and bang on about politics or portfolios. But it’s one of the few times that they actually allow themselves to let their guard down and not worry about all of the bullshit.   If you’re planning on dating a Capricorn then you should know the Brutally Honest Secrets things about Capricorn.

Aquarius: helps them to de-stress but don’t look for them when they disappear – they’ve had enough!

Alcohol helps the Aquarius to alleviate the pressure that comes from having to save the world on a daily basis. As they unwind conversation will go from deep and meaningful to superficial and gossipy. But they also know when the limit has been reached and will simply disappear without saying goodbye – don’t take offence – they’re just done.  How to get a Aquarius Man fall for you

Pisces: sometimes its like watching a train wreck, you can’t look away!

The Pisces sign is a master of self medication. If going through a down period they can get quite sentimental and loose with secrets. Their tolerance for liquor is low and some of the crazier ones have been know to end up in hospital with alcohol poisoning. However – if happy and settled – this sign can be one of the sweetest drunks around – spreading joy and fairy dust wherever they go! Things to Remember While Loving a Pisces and if you are in a relationship with a Pisces Here the secrets ways to make a strong relationship with a Pisces! 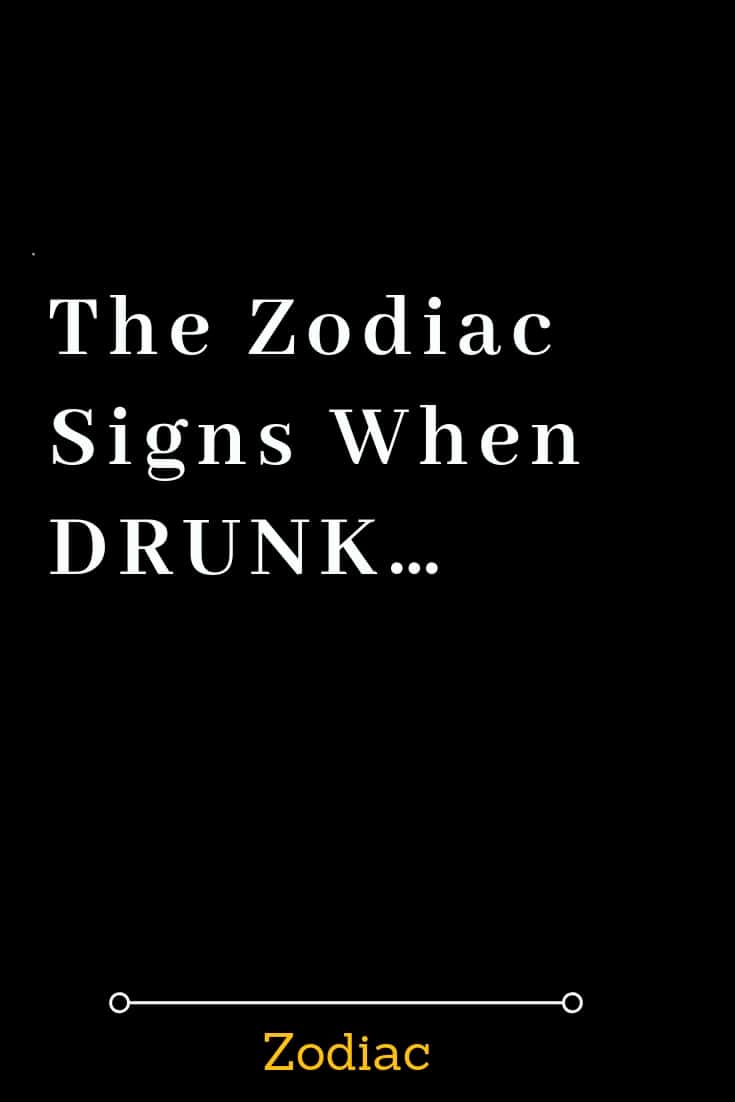 The Reason Why You Get Attached To Unavailable Men, According To Your Zodiac Sign

Here’s Why Your Girlfriend Is A Totally Crazy Bitch, According To Her Zodiac Sign