The Best Way To Convince Your Ex To Get Back With You, Based On Their Zodiac Sign

The best way to convince your ex to get back with you is to not convince them at all. An Aries values their independence, even when they truly want to be with you, they still like the chase. If you grovel to an Aries they’ll never get back with you. Let them have their space and pretend like you’re perfectly fine without them, and they might just end up reaching out to you.

The best way to convince your ex to get back with you is to apologize and tell them they were right. A Taurus always thinks they’re right, cater to that quality when trying to get them back. They want to know you’re sorry for what you did wrong, and that you’re able to own up to it. And then they want to see what you’re willing to do to prove you actually mean it.

The best way to convince your ex to get back with you is to talk to their friends and family. Ask them for advice. Tell them that you miss your ex and that you messed up. The Cancer is extremely close to their family so chances are they’ve told them whether they miss you or not. You’ll be able to tell whether they’ve completely trash-talked you, or whether they can’t stop whining about how they wish the two of you were still together.

The best way to convince your ex to get back with you is to tell them how wonderful they are, and how terribly you messed up. The Leo loves to be complimented. If you really want them back, feed their ego as much as you possibly can. Tell them how beautiful, smart, or good in bed they are, and how much you miss all of those things. They’ll be wary of your flattery, but they’ll eventually eat it up.

The best way to convince your ex to get back with you is to be friends with them. The Virgo needs to be friends with you before they romantically date you, and when you break up, that same cycle has to repeat itself if you want them back. They need that trust to build back up gradually. The Virgo doesn’t play around. They’re cautious with their feelings and their heart, and they’ll take as much time as they need to insure that you won’t break their heart a second time.

The best way to convince your ex to get back with you is to spend as much time as you possibly can with them. The Libra needs someone who will be by their side, someone who is always there for them. When the two of you broke up, you weren’t there. Be there for them now, and show them that you’re worth a second chance. They’re happy when they have someone to keep them company. If you want the Libra ex back, show them that they’re not alone and never will be.

The best way to convince your ex to get back with you is to make it seem like a challenge. Whether you like it or not, the Scorpio enjoys the thrill of the chase, and any challenge you give them they’ll want to overcome. It’s not easy to win back the heart of a Scorpio, but if you play your best cards, you might be able to do it. It’s unfortunate if you hate playing games because that’s exactly what it takes to get the Scorpio ex back with you.

The best way to convince your ex to get back with you is to make them weigh the pros and cons, and to make sure the pros tip the scale. The Capricorn is practical and there’s reasoning behind everything they do. If they’re going to get back with you they need to know you will be worth it, and they’ll only know that from what you show them. Show them how you’re worth it, don’t just talk about it.

The best way to convince your ex to get back with you is to bond with them over your past in a meaningful way. Aquarians are deep individuals and they like to form deep connections with their partners. Make them remember the connection you two used to have and they’ll be more likely to crave that connection back. Recreate a beloved memory, take them somewhere you’ve been in the past, a place you both love. Try to recreate the connection you two once had by making them remember the happy times of your relationship.

The best way to convince your ex to get back with you is to come clean. Let them know every little thing you’re thinking, every little emotion you’re feeling, anything and everything that’s on your mind. The Pisces needs a partner who is open and honest, especially about their feelings, so you need to leave all hesitation behind and become an open book. Let them know there’s no more hiding or pretending and show them the real you. 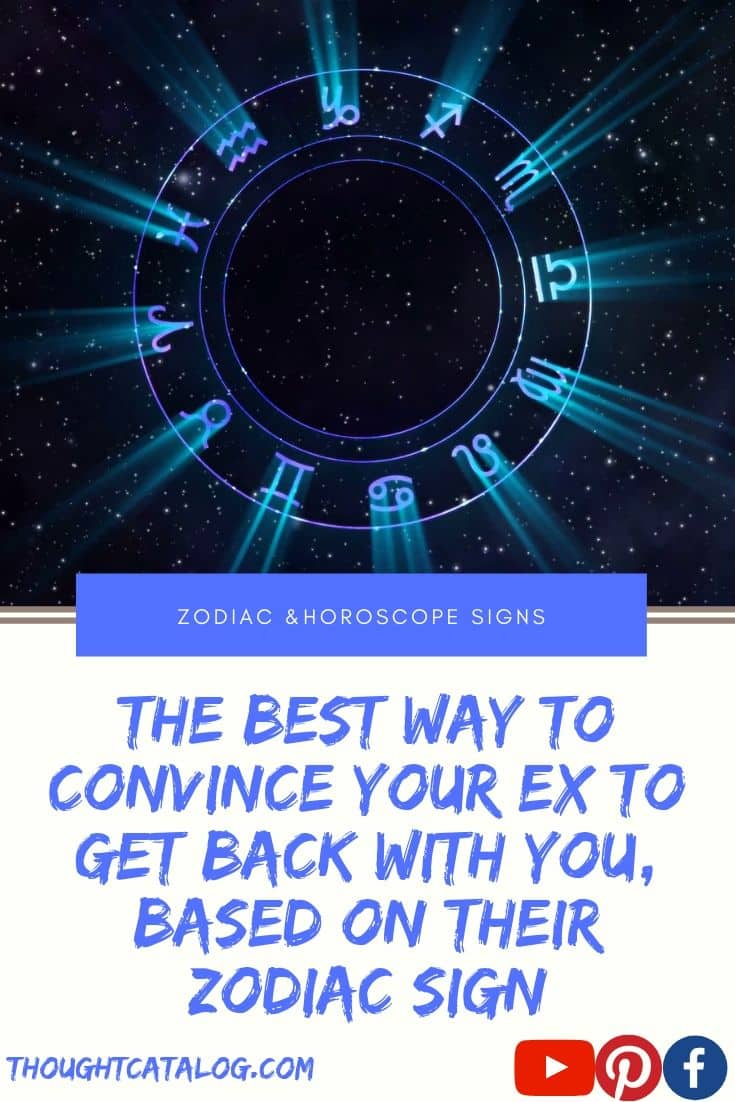 7 Ways To Kick Your Ex Out Of Your System

1. Stop stalking him ‘Out of sight, out of mind’ fits perfectly with the situation you are in. You are self-sabotaging your healing process by...

Your Zodiac Reveals Why People Are Drawn to You

Have you ever wondered what it is about you that naturally draws people to you? It could be more than just your gorgeous looks...

When it comes to locating true love a great deal of the time we perplex it with something else. True love is not as...

Brutally Honest Reasons Why You’re Undatable, According To Your Zodiac Sign

1. Aries You scare people. You’re brutally honest, and you’re incredibly unpredictable. People simply cannot put their trust in you because they never know what...

This Weeks Horoscope Is Going to Be Extremely Dramatic, But It’s All About Growth So Chill Out In 2020

This summer has been an intense one from an astrological perspective. From the incredibly high number of planets moving into retrograde to the longest lunar eclipse of...
𝐓𝐡𝐞 𝐭𝐡𝐨𝐮𝐠𝐡𝐭 𝐜𝐚𝐭𝐚𝐥𝐨𝐠𝐬 is an Educational & Entertainment Platform theme. Our Team Publishes 100+ Content On Weekend/Monthly. We will motivate the needs of any person & make them inspire instantly You, Will, admit Once You Begin Your Journey With Us. The Thought Catalogs platform is a perfect choice.
© Copyright © 2022 - All Rights Reserved | TheThoughtCatalogs.