When someone tells you to jump, you don’t ask, “How high?,” you sit down and cross your arms defiantly. When someone politely asks you to lower your voice, you start shouting at the top of your lungs. When you see a sign stating that the speed limit is 65MPH, you purposely slam on the gas pedal until you’re speeding well over 90. You don’t listen to what anyone tells you to do, even if it’s for your own good. They might as well be talking to stone.

It’s your way or the highway, and you are prone to throwing tantrums if you don’t get your way. Neither rhyme nor reason nor common sense can overcome that mountain of stubbornness, that giant battleship of implacability, that is your personality. It’s a good policy—when you’re right, that is. But when you’re wrong, you always wind up learning the hard way.

You, little baby, are prone to pouting if you can’t call the shots. You would rather fail on your own terms than succeed on someone else’s. And hey, look, no one’s criticizing you for being headstrong or for having a solid sense of yourself—those are all good skills for surviving in life. But if you had a little humility and listened to others’ well-meaning advice every once in a while…if you were willing to consider that sometimes people have more experience in certain areas than you do…you might realize the benefits of trading in a little bit of your ego for a little bit of others’ wisdom.

You’re like the little kid that keeps asking “Why?” You need to take out the trash.“Why?” Because it’s unsanitary to leave it around the house. “Why?” Because scientists have determined that when trash is left to rot, certain unhealthy microorganisms start growing on it, causing several potential health hazards to humans and their pets. “Why?” JUST TAKE OUT THE FUCKING TRASH!

It depends on how much you like the person who’s telling you what to do. More specifically, it depends on whether you’re sexually attracted to them. In that case, you’ll do anything. You’ll become their willing love slave. You’ll follow them to the ends of the earth and make a fool of yourself just for their approval. But if you aren’t attracted to them, you won’t do a thing they tell you to do.

Reverse psychology works wonders on you. Since you consider yourself empowered and woke and in control of your body and mind, you absolutely hate when others tell you what to do. But over time, they’ve realized that if they actually want you to go to the concert with them, all they have to do is say, “I don’t want you to go to the concert with me.” Bingo, immediately you buy tickets for both of you to the concert, thinking you’re being assertive but not realizing you’ve fallen for their trap.

You know what you want and what you don’t want, and most of the time you’re quite happy carving out your own path in life. You don’t like when people tell you to do things “for your own good,” because most of the time they have no idea what’s good for you and they’re only projecting their own biases and prejudices onto you. But if someone presents a novel solution to a problem, you’re humble enough to consider it.

You don’t necessarily mind being told what to do—in fact, you’re always seeking advice from people with more expertise than you have. If you notice a suspicious mole, you’ll take a picture of it and send it to your doctor friend. If you have a legal issue, you’ll ask your lawyer friend. But if someone tells you to change your hairdo because it’s out of style, you’ll purposely keep that style for the next fifty years.

You don’t mind being told what to do. It doesn’t faze you in the least. Whether or not you actually do it is another matter, though. Most of the time, you won’t. But that’s due more to the fact that you just don’t like doing things in general and has less to do with being told to do them. It’s more a matter of laziness than belligerence. Sorry—just being real here. No need for you to get up off the couch and start yelling at me, dear.

You are so agreeable and compliant, it’s a little annoying. There are robots that are more willing to disobey orders than you are. On the surface, this is an admirable trait—we’d have a much more harmonious society if everyone just went about doing their assigned tasks without bitching about it. Then again, we’d have a society of robots rather than human beings. But the problem, darling, is that sometimes when people tell you what to do, it’s beneficial to them and harmful to you. All I’m asking is for you to be a little more assertive and make yourself #1. You’ll thank me later, I swear. 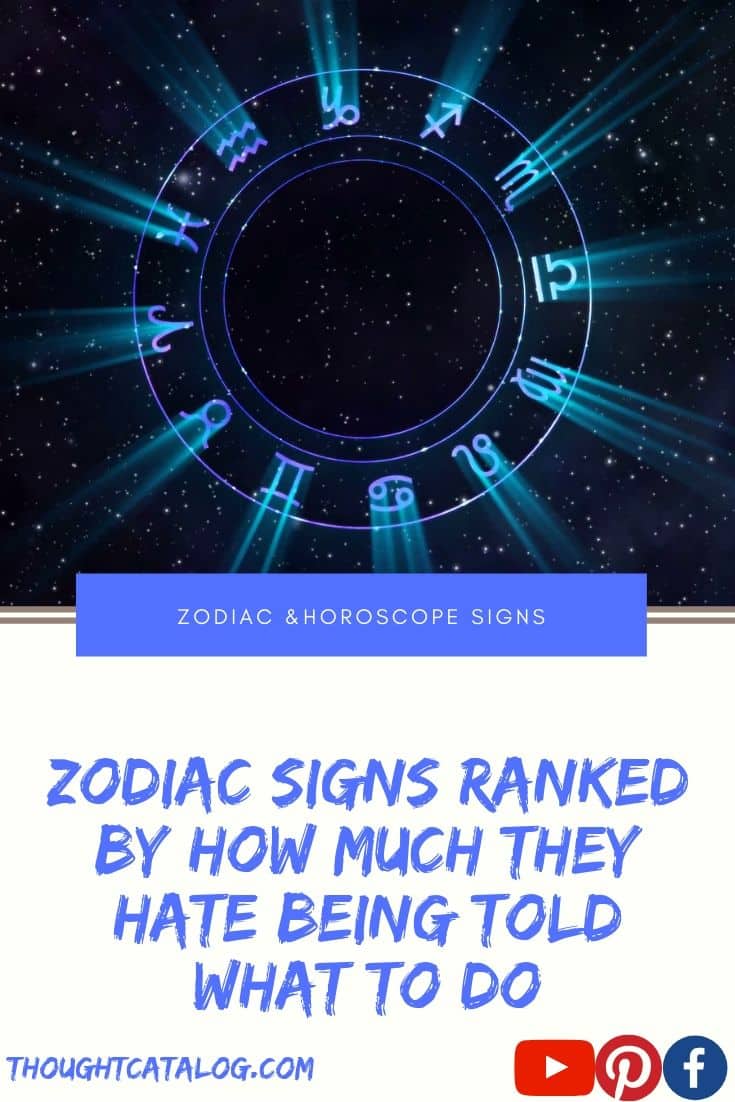 The Best Way To Convince Your Ex To Get Back With You, Based On Their Zodiac Sign