Understanding the concept of the 80/20 rule of relationships can be a bit confusing or even unknown to some people, so let’s start at the beginning and explain what it is exactly and then continue on to have you spin it and make your love life amazing.

It’s like a fatal flaw in human DNA that makes us think that the grass is greener on the other side, so we crave more the 20 percent we don’t have and take for granted all the rest.

We fight with our partner, we feel like they give us less, we even break up because of that 20 percent, without even considering the major part which is generally great.

To transfer things into a real-life situation, let’s say you are dating someone who is loyal, someone who makes efforts and makes sure you know he cares.

On the other hand, he does really stupid little things that make you feel neglected, like spending too much time playing games, falling asleep really fast or he doesn’t like to socialize as much as you do.

So instead of putting your main focus on the more important part and the fact you have 80 percent of the things you want, you obsess about the part that is lacking and you hold it against him so much so that your problems become deeper and bigger.

Then you hear your friends talking about the 20 percent you don’t have and you feel envious. You see it exists and you wonder why your significant other can’t be more like that.

A similar thing would happen if you were to meet someone new, someone who had that small percentage that you yearn for and which seems so ideal and appealing.

But your mind is so clouded by that 20 percent that you don’t see that they don’t have all the other things you want. They don’t have the 80 percent your partner already has.

Remember what I told you about the grass looking greener on the other side? That’s the point if something looks a certain way, it doesn’t necessarily mean it actually is.

So how to spin the 80/20 rule of relationships to fix the situation you are in and improve your love life?

stop expecting your partner to be perfect

Appreciate what you have instead of crying over the small stuff that you are lacking. Your significant other isn’t perfect and they are not supposed to be.

They can’t do things like you imagined them in your head, they can’t behave in every situation like you would like them to, they are not in your mind and they see things differently than you do.

Admit to yourself that you are not perfect either, maybe you don’t have 20 percent of what your partner wants but you surely have 80 percent they can’t live without.

You wouldn’t like them holding that small percentage over your head, now would you?

They are your boyfriend or girlfriend, not your friend’s. They can’t behave in the same way or do things you think are great in your friend’s relationship.

It’s important you realize you are two completely separate individuals who are totally unlike your friend and their partner and that there is no way you would want the same things or react to certain situations the same way.

Most importantly, you only get your friend’s side of the story, which might be blown out of proportion or at least a bit embellished and you don’t know what’s under the perfect surface.

Remember that nobody has the whole 100 percent, nothing is ever that perfect and everybody has at least that 20 percent they will always lack.

So start concentrating more on your own relationship and stop wasting your time on comparisons, it’s irrelevant and useless and you are only doing more harm to your relationship than good.

A lot of people always see the problem in their partner, not even taking into consideration that they might be the one to blame or less than perfect in certain situations.

Don’t be one of those people. Be a realist and understand that none of us are saints. We are all flawed in our own way.

So before attacking your partner and burdening them with all the blame, take some time to reflect and reevaluate your thoughts, wishes and actions.

Are you impulsive, should you count to ten before you react? Are there some things that you might be doing wrong?

determine what you want

The cause of all our problems with that 20 percent we perceive as faulty in our partner might lay in our inability to be honest with ourself about what we want.

It’s time you do just that. Literally take a pen and paper and write down all the things you want from your partner and your relationship.

Now take a really close look, are you getting most of the things you want from your partner and do they make up for the part that’s missing? If you were him looking at your list, would you like him to ignore the negative and concentrate on the positive?

If the answer is yes, you are not really missing much in that 20%, am I right?

This is the reason why most of us don’t know what we want, we simply forget to ask ourself, we forget to get to know our wishes, preferences, and goals and actually dream our dreams.

There is nobody who can make your life whole but you. The other person just complements your life and adds to it. So make sure you are clear about that.

# determine why you entered your relationship in the first place

To expand on the previous note, it’s important to say that people have a habit of entering a relationship hoping (sometimes even unconsciously) they will get something from it.

Mainly they are looking for somebody who will make them happy. Don’t fall into that trap, there’s nobody who can make you happy, at least not long-term, if you don’t make yourself happy first.

Keep in mind that relationships are about give and take and that both segments have to be incorporated. Love flows when both people are equally invested in each other.

The way in which you interpret somebody’s words or actions might have nothing to do with what they said and everything to do with negative experiences you had in the past.

Don’t let the emotional baggage you carry within yourself ruin a potentially good relationship. Your current partner is not guilty of any of the things your ex or exes did.

So before you get all worked up about that 20 percent of the problems you have with him, make sure they actually do have something to do with him.

Count everything you have in the 80 percent part. Try to see the bigger picture and be real with yourself about what you really need.

You probably have much more than you think but you are so concentrated on that 20% you don’t have that you don’t see how lucky you are.

I hope you are clear now on the meaning of the 80/20 rule of relationships. I bet that now it all sounds logical and quite obvious.

The most important thing to remember if you want to make your love life amazing is not to sweat the small stuff. Don’t make problems where there aren’t any.

Don’t brush anything under the carpet either, so if that 20 percent contains things that undervalue all the good things, try to solve them. Talk to your partner and ask them to work on something.

The worst thing you can do is not communicate how you feel, hold grudges or accumulate dissatisfaction. Staying silent never solved anything.

After you have read this, I hope the next time you want to complain about your significant other, you will take a moment to breathe and think and the most obvious thing you will remember is that valuable 80 percent that you get every day.

The other 20 percent is something you should erase from your memory because all in all, it really isn’t that important.

Acknowledge the fact that you also give 80 percent that your partner wants and 20 percent they don’t want but accept.

Isn’t life better when you concentrate on all the good stuff rather than spend your time dwelling on the things that aren’t so important?

So don’t be petty by giving more value to something as small and insignificant as the 20 percent.

Enjoy the good days and storm through the bad ones without reflecting too much about them. As I said, don’t create problems where there aren’t any.

Time flies so quickly and it’s important we seize as many great, breathtaking, sweet moments as we possibly can. 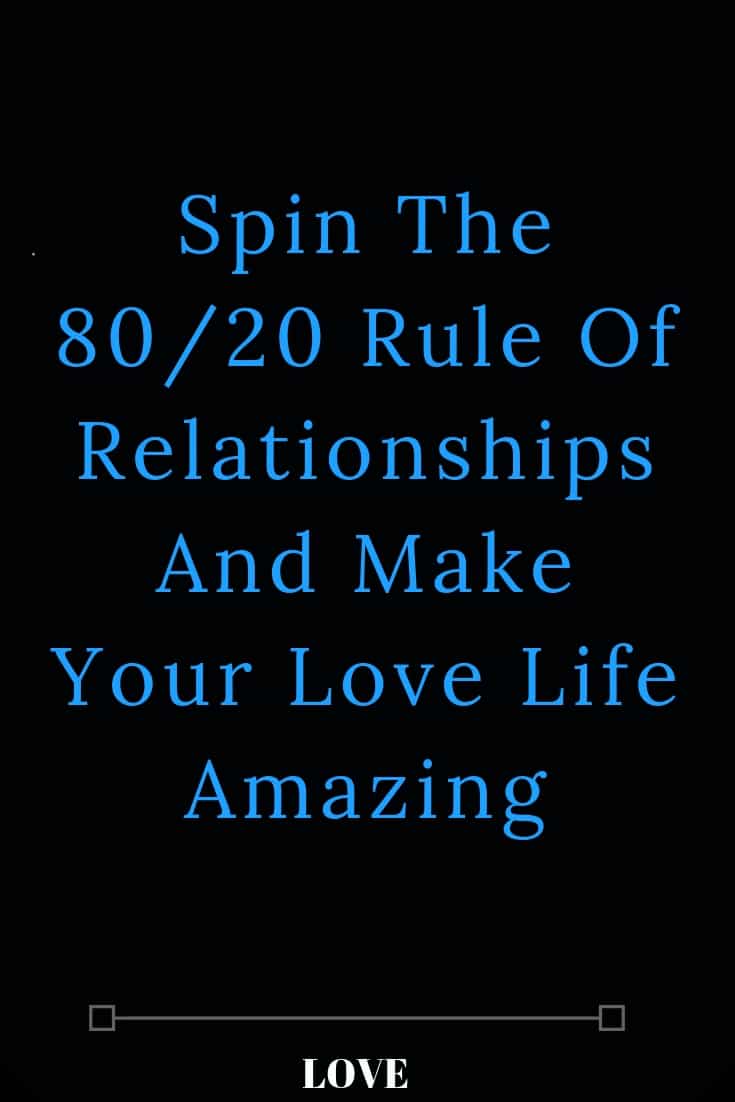 Key Differences Between Real Love And A Simple Crush

5 Things To Remember When You Fall For The Wrong Guy