Leos don’t cry over spilled milk for long. When something ends, for example, a relationship, they won’t wrap their head around the past.

They won’t torture themselves trying to figure out what happened.

Instead, they look forward to the future and everything new and exciting it brings. When it comes to getting over someone, Leo does it the fastest.

Don’t assume they don’t grieve entirely, because they do. They just go out more and occupy themselves with a ton of work.

This is how they deal with it, but you’ll never see a Leo pity themselves or try to bring back the past.

Sags are not as fast as Leos when it comes to moving on. They will give themselves a bit of time to grieve; maybe they’ll even isolate themselves for a while.

But while they are choosing to be alone trying to figure out what happened, in that process, they soon realize life is supposed to go on.

So somehow, they let life take them in the unknown direction to something new and exciting they know is waiting for them.

More importantly, they don’t lie to themselves that everything will be great in a few days.

They give themselves time, so naturally, optimism becomes more and more as time goes by.

Aries would definitely be heartbroken for a long time if it weren’t for their exciting personality.

Aries are the types of people who can’t be in one place for a long time, which means they can’t cry over someone for too long.

Instead of not getting up from bed, they move forward and do a lot of exciting and over the top things just to get their minds off the breakup.

They need to occupy their mind with something completely else, just not to think about the fact they are no longer in a relationship.

So when they go crazy after a split and start doing all kinds of things, taking up new hobbies, etc, their heart has no other choice than to go with the flow and somehow forget it’s hurting.

Pisces would never lie about their feelings, so when it comes to heartbreak, they are very open about how they feel.

After a breakup, the pain is real and Pisces will always admit that.

Funny enough, their honesty and the fact they are sensitive with themselves too, help them heal faster after a heartbreak.

Talking about what happened heals them and helps them move on. When you think about it, it makes perfect sense.

Holding their feelings inside would only make the situation worse.

This way, the heart goes through an adjustment to single life. And in time, it starts healing.

Capricorns are very practical when it comes to heartbreak.

Usually, they have everything planned out, so you’d think things such as breakup would totally mess up their plans, but no. They can plan healing as well.

Down-to-earth Capricorn will make a perfect plan on how to get over someone as fast as possible.

They will give themselves a reasonable amount of time to heal, they will keep everything under their control and soon enough, they will be over the breakup.

You thought you’d find Cancer at the end of the list, didn’t you?

It’s true that Cancers are the most sensitive and emotional sign of the zodiac and although they can go through complete hell after a breakup, they can surprise with how well they handle it.

Pretty much like Pisces, they don’t hide what they’re feeling and when it comes to their pain, they’re very open about it, ready to talk and discuss it.

This is their advantage, because that openness they show helps them deal with heartbreak much faster than someone who keeps everything bottled up inside.

When they break up, they have a ton of questions.

Libras are usually not sure about anything, so imagine them in a tricky situation when all feelings are mixed.

Naturally, then, they have no idea what to think or say about the situation they are in.

What every Libra does is drive themselves crazy with what could have been.

Their overthinking is what prevents them from forgiving and forgetting.

What they have to do is move on, but instead they are stuck in their own mind with millions of questions bothering them.

In a way, Libras are their own biggest enemy.

They make a big deal out of a situation that was never that huge.

They do this every day throughout their whole lives, so they do it after a breakup, too.

Instead of calmly approaching the situation and analyzing what happened (if that’s what they badly want), they put the  blame on themselves for everything that went wrong.

Not only do they blame themselves for the collapse of their relationship, but they convince themselves they will destroy everything that awaits them.

When Virgos think their life is going down the wrong track, they see nothing positive, only the negative.

Virgos get into this state because they never give themselves a break.

They constantly overthink every situation they get themselves into. They don’t know how and when to stop.

A breakup devastates them completely, although that is not their biggest problem. If they deal with it and admit they are hurting, they would get over it sooner.

But what makes them really screwed up is the fact they lie by saying they are okay. They pretend nothing bothers them, which in fact makes them feel even worse inside.

Instead of putting on a brave face, every Gemini really must realize that the only way they are going to move on from a heartbreak is to accept what happened to them and deal with it.

Aquarius think they are over a breakup, but actually, they are not.

What they are really good at is ignoring they are in pain and putting off dealing with what will sooner or later hit them – the fact they have split up with someone.

This may look like a good solution, but it’s actually not. Denying that you’re in pain can only make things worse.

Aquarius cannot avoid what awaits them. They can deal with it now, or they can ignore it until it gets so unbearable, they have to deal with it anyway.

Scorpios deal with breakups pretty badly. Instead of talking to someone they trust and opening up to ease themselves, they completely close inside and they turn their situation into a really serious one.

Not only do they blame themselves for everything that happened, but they make reckless decisions, too.

Maybe Scorpios try build emotional walls and keep everyone out because they’ve been hurt and they’re scared of getting hurt once again, but they are not aware they are only making it worse for themselves.

Taurus are very passionate and they enjoy being in a relationship.

They love the idea of sharing everything they have with that special someone, so when they get themselves in a situation when sharing is no longer an option, they cry long over it.

All they can think about is how everything used to be great.

They tend to remain stuck in the past when instead they should focus on the future and look forward to whatever is in store for them.

When it comes to breakups, Taurus take the longest to move on from a broken relationship and a broken heart. 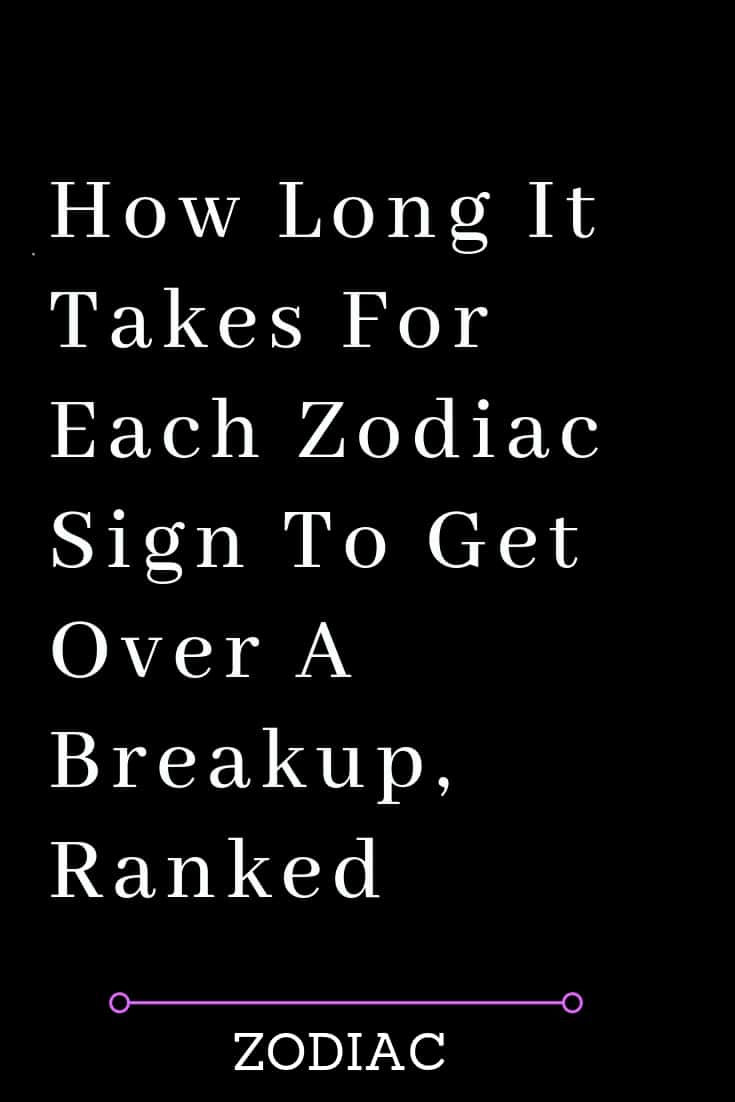 A Virgo Man And A Gemini Woman: Are They A Good Match?

This Is What To Expect From Your Love Life In June, Based On Your Zodiac