Your personality is strong, and it’s kind of difficult not to notice you even if you aren’t trying to be noticed at all. Because you’re strong and always unintentionally in the center of attention, you attract ‘manly men’.

You fall for the guys who buy you things. You think that buying presents and really caring for someone is the same thing, but it’s not. Presents are not the equivalent of happiness.

Wrong guys for you think they can buy your love with jewelry and stuff like that. Unfortunately, you mix that up with real love, and you end up dating someone who doesn’t want to commit and is not serious about you while you, on the other hand, want a real relationship.

The right guy for you knows he can’t buy his way to your heart, and he won’t even try to get you using his power and money.

You fall for mysterious men, and usually, you’re in for a disappointment. Not all men that are secretive are also interesting. You look at the guy as a challenge, and you promise yourself you won’t stop until you reveal everything he’s hiding.

Usually, the only thing you find out is they are boring and that was the secret they were keeping.

The right guy for you won’t have any secrets in front of you. If he likes you from the start, he’ll let you read him like an open book.

You’re an incredibly nurturing and caring person. Because of the way you are, you attract the wrong men. You are a magnet for men who aren’t capable of taking care of themselves.

Men you fall for don’t appreciate you, and they take your love for granted. They consume so much of your energy that you end up feeling nothing. They almost suck you dry by taking and giving nothing in return.

The right guy for you won’t let you take care of him; he will take care of you. Because underneath that hard exterior, you’re a loving person who needs to be loved as much as you give love to others.

You know how to put on a great show. You can present yourself to people just the way they want it. So, naturally, you attract men who aren’t in love with you but the idea of you. They are in love with the person you let them see.

But the moment you drop the act and show real emotions and present real problems which are bothering you, they get less interested. These men are not used to the person you are, but the person you’ve pretended to be.

You need a man in your life who won’t be fooled by the mask you put on. He won’t fall for the false you because he loves the real you even better.

You’re too hard to yourself, and wrong men take advantage of that. They know they can do whatever they want because you’ll always blame yourself first. You’ll think it’s your fault for something he did because you’re self-critical.

Even if you catch them cheating, you’ll blame yourself for not giving them enough attention, so they went out there are looked for it by themselves.

The right guy for you will never let you take all the blame. The right guy will be brave enough to admit when he is wrong, and he will have the guts to say ‘I’m sorry’ when he does something wrong.

You’re attractive as hell, and pretty much every guy falls for you. But in that sea of guys, you can easily stumble upon the wrong one as you usually do.

Since you’re a very nice person, you don’t want to hurt anyone’s feelings which you sometimes should. Don’t put up with men you don’t like just because they might feel hurt. Confront anyone who stands in your way of happiness.

The right guy for you won’t feed off conflict, and he will encourage you to speak your mind and stand up for yourself.

You attract guys who like when you walk all over them. You’re very assertive and determined. You won’t let anyone tell you what to do. Men you attract like being bossed around. You giving orders is what turns them on.

Obviously, this is not normal. You have to have a relationship that is going to be the fusion of mutual decisions and respect. Men who don’t want that are wrong for you, and after a while in a relationship with that kind of a man, you realize that you want someone to stand up to you.

The right man for you won’t always agree with you and will have no problem saying ‘no’ to you when he feels he’s right.

You attract guys who think they can own you. Well, let’s just say that mission is completely impossible. You are a free-spirited and adventurous person. You want your life to be full of excitement, and any person who tries to tie you down has another thing coming.

The normal life is not for you. You can’t live a calm life, doing the same things all over again. That rut would kill you. Anyone who thinks they can change you and ‘calm’ you couldn’t be more wrong.

You need a guy who will go on crazy adventures with you. You need a man who will never say ‘no’ to the crazy ideas you have. You need someone exactly like you.

You’re truly mature and serious for your age. You know what you want from life, and the biggest problem you have is that people don’t get you seriously. It’s probably because of the fact that you’re young, but you think like a grown ass person.

So you attract wrong men who don’t take you seriously when you say you want a committed relationship. They date you, and when they realize after a few months that you weren’t joking, they leave.

The right guy for you will have his life planned out to the last detail, just like you do. He will know exactly what he wants from life, and he will work to make his dream come true.

You attract the kind of guys who think they want someone intelligent by their sides. They think they are smart as well, and they need an equal companion. But when they are actually dating someone that intelligent, they realize they don’t have the capacity to fully understand them.

All the wrong guys fall for you because you’re that smart, but the problem is, they can only learn from you; they can’t teach you anything.

The right man for you will challenge you and make you become even better and smarter than you already are. He will teach you things you never dreamt of learning. You will complete each other.

All wrong men fall for the fact you’re an artistic type. That’s the main reason why you are so interesting. But when they really get to know you, when they realize it’s not so easy to live with someone like you, they want out.

Your ‘crazy’ artistic side becomes too much for them to handle. The problem is they treat you like you are an experiment. They just want to feel what it’s like to date someone like you. So when they are done, they just leave. 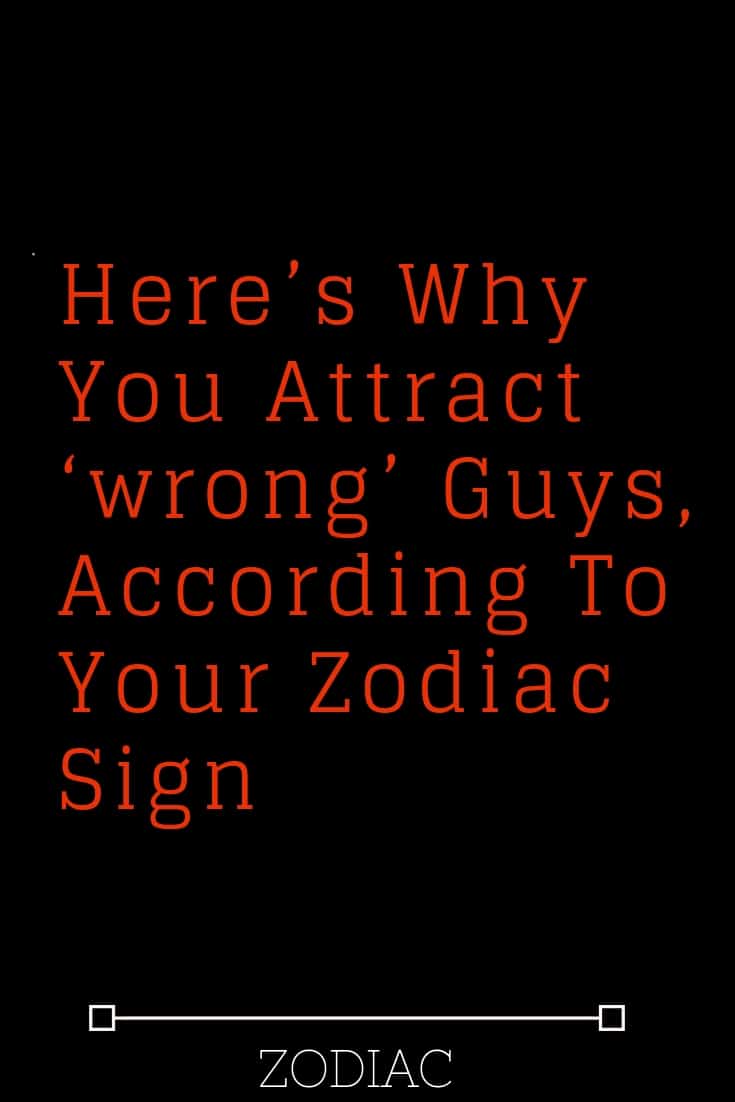 This Is Why You Aren’t Happy With Your Love Life, According To Your Zodiac

Zodiacs Ranked From Total Grinch To Heart Of Christmas Cheer