I know you’re tired of putting a fake smile on your face. You’re tired of pretending everything is fine. You’re so fed up with giving automatic answers to the question: “How are you doing?” “Yes, I’m fine, I’m great!” you say, thinking and wishing for all the questions to finally stop.

I know that when you come home, when your days becomes less turbulent, and when you give your mind some space to wander, it wanders directly to him!

I understand how much pain you carry in your heart. I know how many scars a hurt person can hide. You keep your pain all to yourself. You’re hurting, you’re falling apart, and no one sees it.

Please, resist your urges to contact him. Please swear at yourself when your hands reach for the phone to check his social media. Curse, shout, go outside—do literally anything you can think off, but don’t crack under the pressure.

Deep inside, you’re hoping he’ll change. You’re hoping he wants to become the person you fell in love with once again, but he doesn’t. He still blames you. He is still sticking to his story. He needs someone to release his anger and frustration on.

I don’t blame you for hoping he’ll come around. He wasn’t such an asshole the whole time. There were moments when he was kind and sweet, when he showed you how much he cared, when he held you in his hand like you were a fragile flower, protecting you from everything, keeping you safe from the world.

There is a story I once read, and in that story, there was a sweet little boy who found a fox. That fox was scared of him, that fox was from the wilderness. That fox needed to be sure that once the boy tamed her, he won’t leave her. And there was something that the fox said to the Little Prince that got me thinking of you:

“To me, you are still nothing more than a little boy who is just like a hundred thousand other little boys. And I have no need of you. And you, on your part, have no need of me. To you, I am nothing more than a fox like a hundred thousand other foxes. But if you tame me, then we shall need each other. To me, you will be unique in all the world. To you, I shall be unique in all the world.” – Antoine de Saint-Exupéry, The Little Prince

He should have done the same. He who tamed you, whom you trusted. You should have been his unique person, someone he would never hurt and let go of.

He never kept the promise he made. He didn’t protect you from the pain. He caused you pain. And slowly your relationship became one-sided.

He didn’t give a damn about you, and you were still picking up the mess after him, hoping he’ll see how much pain he’s causing you. You were swallowing the tears, hoping he’ll come around.

This time, don’t go back to him. Don’t allow yourself to be hurt and broken again. I know you’re still carrying the weight of it on your shoulders, but it’s only a matter of time before you’re going to crack under pressure and break beyond repair.

This time you have to stay strong. You mustn’t let yourself yield. He is your weak spot. He is your kryptonite. Don’t let him destroy you for good because he’s going to.

Keep fighting your internal battles. Let your heart and your head argue, and help the reason prevail. It’s the best you can do. It’s your last chance for happiness.

Please, if he was the last man standing, don’t go back to him.

You’ve already come so far. Don’t destroy everything you’ve built so far. Please, don’t go back to him. 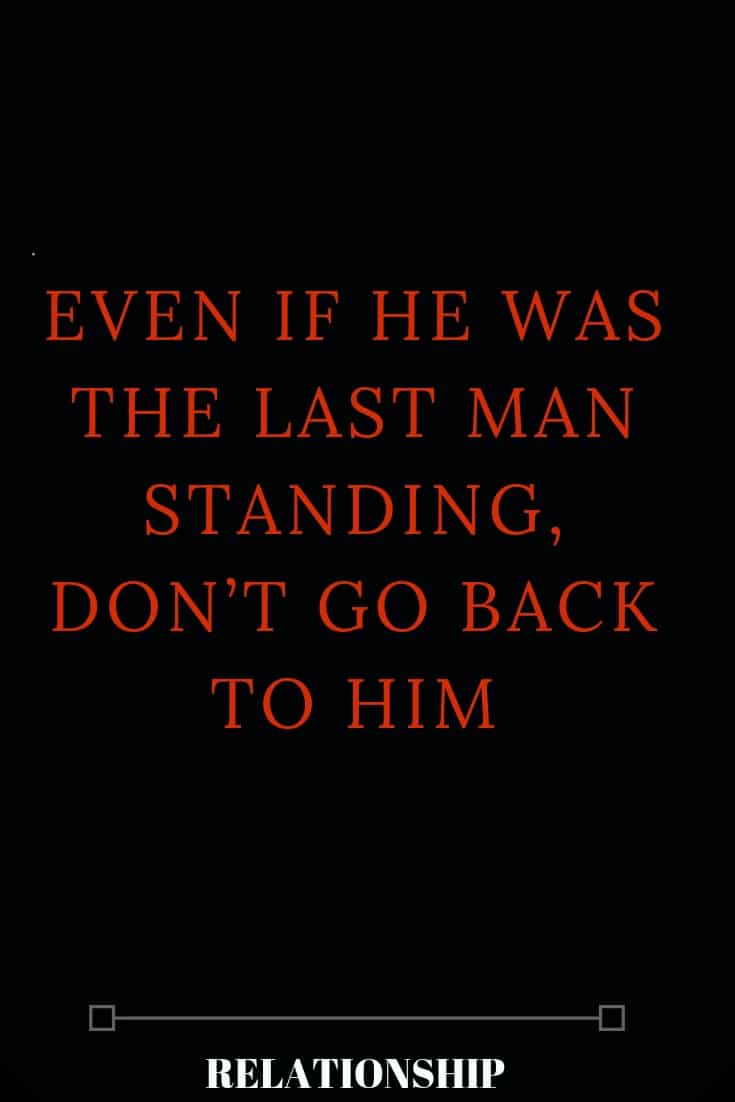 7 THINGS TO DO AFTER YOU CATCH HIM CHEATING

Check Also
Close
Featured Posts
These Zodiac Signs Ranked From Nicest To Cattiest, Based On Zodiac Sign
6 hours ago

These 3 Zodiacs Who Absolutely Hate Catching Feelings In February & March 2023, Based On Zodiac Sign
6 hours ago

These Zodiac Signs Ranked From Most Psychic To Totally Clueless in 2023, Based On Zodiac Sign
6 hours ago

These 4 Zodiacs Who Will Walk Away If They Catch You In A Lie In 2023, Based On Zodiac
6 hours ago