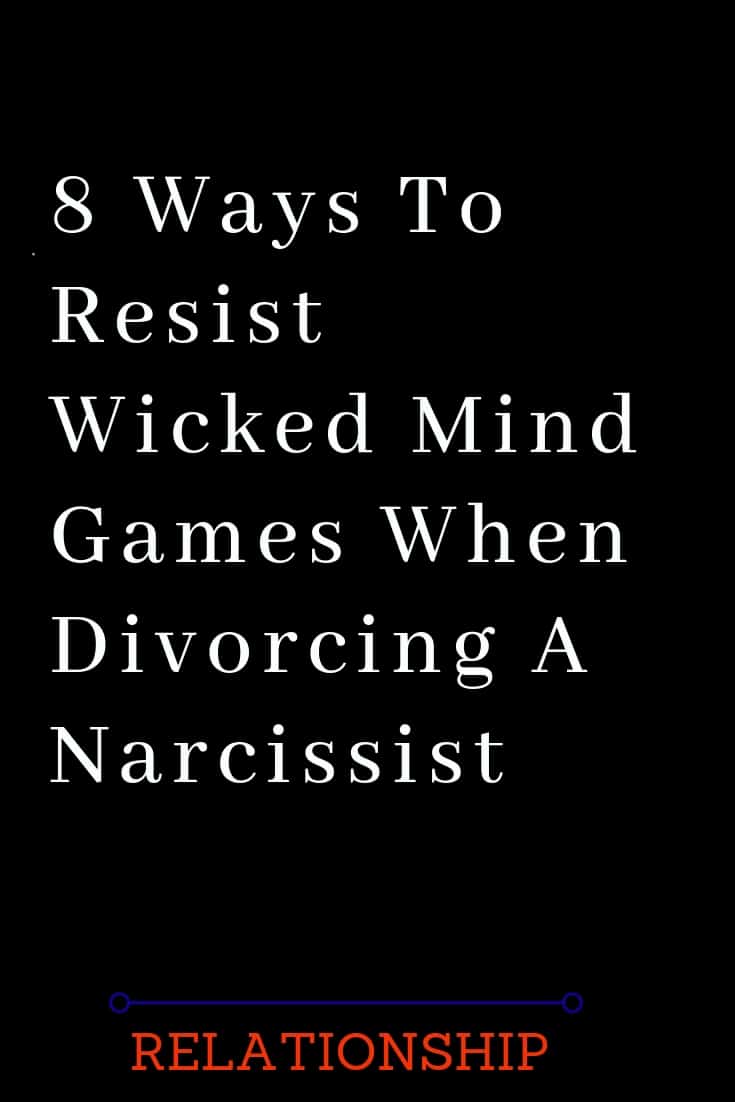 Actually, I had no idea my ex was a narcissist, not until we got a divorce.

I used to hear women mention narcissism, mind games, manipulation and emotional abuse and the sad thing is I had no idea that was happening to me, too.

Maybe I didn’t even want to admit it to myself at that time.

The point is, throughout my whole relationship, my entire marriage with my narcissistic ex-husband, I felt like I was the crazy one.

I felt like every problem was on me and that I was the source of our troubles.

Then our marriage fell apart because I couldn’t take it any longer.

I just gave up on trying to fix things, on walking on eggshells when I was around him.

I gave up pretending to be something that I was not just to make him happy, because what happened to my happiness in that story?

What about my feelings?

I believed I should get a saying in all of that because after all, it was my life that was at stake. Sadly, he never bothered with what I wanted, he never even lifted a finger to help or to even show interest in my life.

He never stopped and asked me why my eyes were smudged with mascara, if I had been crying.He didn’t give a damn.

I had never met a more devious or cunning person in my entire life.

He would crush everything and everyone just to get what he wanted and what he needed and that something was complete and total emotional chaos.

He needed his narcissistic supply and he knew how to get it—through me.

I was going through emotional hell and the worst part was no one believed me.

No one could even try to imagine that my ex-husband, a narcissist disguised as a good and honest man, would possibly be able to do anything harmful to anyone.

His story was bulletproof and his behavior would never suggest something was wrong with him.

He had a charming story and tons of confidence and it was crazy for anyone to suspect he was a narcissistic piece of shit.

So imagine my struggle and emotional pain during our divorce. Imagine how it feels to fight someone who lies to everyone and what’s even worse, everyone believes him.

Imagine how it feels like to be fighting the world alone and you are the only one who knows the real truth but no one believes you.

Fortunately, he couldn’t keep up with his charade for long. I was smarter than him and I was more persistent. After starting to ignore him, after making myself dull as a rock, he lost interest in me.

That’s when I finally found my peace. He gave up torturing me and my kids and moved on to the next victim.

He had to move on because I was no longer his narcissistic supply and he can’t live without his supply. So he left in a rush to find it somewhere else.

I’m not saying fighting him was easy because it wasn’t. It was the hardest fight of my life because I had to stay sane for the sake of my children.

I had to resist his cunning little games and his gaslighting in order to get me and my children away from him.

He even managed to turn them against me. He even succeeded in turning my own family against me. It didn’t last for long but it hurt like hell.

It felt like the whole world had turned against me. With time, they’ve all seen who he really is after his mind games didn’t work on me anymore.

That frustrated him; he was losing it so he flipped and accidentally showed his real face.

There is a way of putting up with the evil a person can throw your way. It takes patience, strength and surviving a lot of pain.

You’re going to feel left and abandoned, with no reason to live your life like that.

Know that all of that is just a phase which will pass if you do some things right:

Do whatever it takes. Ask several opinions and choose the person who you think will be the best for your case.

Remember to keep this on a low profile because of the narcissist.

If he finds out you’re looking for a lawyer and you’re going behind his back, he will return to you and play one of his mind games on you, like love bombing or stalking.

Be clever about it and take this action in secrecy and be prepared for every possible scenario because in a fight with a narcissist, the gloves are off.

It’s in the interests of a narcissist to prolong the process.

That means that he has more time to manipulate you into accepting his version of the truth which actually he believes in.

Narcissists really believe in what they say. They don’t even question their thoughts or their claims.

Whatever it is you make a deal on, a narcissist will never see it through.

They will do a part of what they are supposed to do and then they’ll try to convince you to change what they don’t like. It’s all a part of their game to stall things.

They will never consider a compromise as a possible solution to your problem and they will always try to manipulate you into backing off so things end up their way.

So, don’t fall for that trick and never try to settle out of compassion for your narcissistic ex. He can’t feel empathy and he doesn’t care about you or your children.

The only person he cares about is himself.

3. Collect all the important papers

Make sure you are the one who has all the papers necessary for the divorce. Pick up birth certificates, copies of the bills, your marriage license and anything else you need.

If you get yourself in a situation where you need something from your narcissist, you can count on him not giving it to you.

He will lie that he doesn’t have it, he’ll lie he’s working on it, or he will simply, “No,” with some lame excuse.

Remember, you’re playing against a narcissist and you have to be as devious as him.

You have to play rough and lower yourself to his level because if you choose an honest way to try to win the battle, you’re going to lose.

So, I warmly suggest you use everything you have against him.

And keep in mind that a narcissist has the ability to present himself as peachy perfect through a series of devious actions.

The judge will most likely buy his story. Don’t let this happen and use all means possible to stop him.

Cease all communication with your narcissistic ex. He is devious enough to use your every frustration outbursts against you and in fact, he’s counting on that.

That’s why he’ll provoke you and deliberately make you angry so you feel tempted to say a lot of ugly things via text or calls.

Don’t fall for that manipulation and try to suppress your anger or channel it elsewhere.

Never break a no contact rule with a narcissist. If you do, he’ll make sure you pay for everything you did or didn’t do to him.

6. Surround yourself with people who care about you

You could use any emotional support you can get. Get to your family and your friends before he does.

Admit everything and talk to them about what kind of a monster he is.

Don’t be embarrassed and after all, people who sincerely love you will never judge you. They will offer you help because you deserve it.

At times, you’re going to need someone to talk to because being alone in that kind of situation can easily mess up your mind.

7. Make sure your children get the help they need

Kids are usually secondhand victims in these kinds of situations, especially when a narcissist father is involved. He will stop at nothing.

The fact he’s harming his children doesn’t mean anything to him because as I’ve already said, people like him only care about themselves.

Hire a counselor to help your kids deal with the situation; even though you think they are okay because they are not talking about the divorce, that doesn’t necessarily mean it’s true.

Chances are they are bottling up their feelings and they really need someone to help them deal with them.

8. The harassment won’t stop after the divorce

He won’t stop manipulating you after the divorce. Just in case, make sure to do everything to make yourself the least interesting person alive.

Never fall into traps like when he asks you how your day has been and you politely answer, giving him details which he can use against you.

Keep your personal life away from him. Talk about only the necessary things, things that are related to your kids.

Never reveal what you’re up to or how you’re feeling.

Set firm boundaries and never make exceptions. If you give him a heads-up, he will be all over you, trying to get more every time.

Make sure he knows your boundaries are what they are, with no possibility of changing. You can do that only if you stay consistent with your decisions.

It’s possible he will try to turn your kids against you after the divorce but don’t worry.

I know it’s hard as hell to listen to lies and false accusations, especially when your kids are involved in that.

Keep your strength and support your kids no matter what. They will get the hang of what the truth is sooner or later.

Divorcing a narcissist will be ‘the’ battle of your life but you’ll get through it. Just remember, there is no way to reason with a narcissist, so don’t even try. Plan your main goal and make it come true at any cost.

I Never Wanted To Need Someone, But I Love Needing You

6 Zodiac Signs Who Are Totally Addicted To Love

What Each Zodiac Needs To Leave Behind In 2021

February 2021 Full Moon: It’s Time For Change Based On Your Zodiac Sign

6 Things Guys Do That Seem Shady But Are Truly Harmless

ThoughtCatalogs - June 11, 2020 0
I used to look at you and see my future—our future. I think that’s what hurts the most. From the start you felt different,...