Every woman wants a strong and mature man beside her but rare are the ones who actually find guys like that. Most women that I know are stuck with weak guys who don’t want to do anything good with their lives and who just rely on their partners for anything they need.

Guys like that are not even guys, they are just leeches to me. And to prevent you from falling for someone like that, here are some warning signs of an immature and weak beta man who will never do anything to make you happy.

1. He lets you solve all the problems

If the man you live with lets you solve all the problems while he stays back not wanting to stress about them, you should ask yourself if he is really worth it. If you are the one who handles all the bad things while he enjoys life then you are dating a weak man who isn’t even capable of taking care of the woman he loves, if he really does love you.

That kind of relationship is unacceptable so think twice about whether you will stay with him or you will move on.

2. He pleases everyone else but neglects you

If your man tries to satisfy everyone but you, then he is just a weak man who only gives a damn about what others will think about him. He doesn’t care what you think of him because he is taking you for granted and he thinks that you will always be there for him.

But what you should do is leave him, just to scare the shit out of him. Give him a taste of his own medicine and never settle for the one who doesn’t love you like you deserve.

3. He is never there for you

If you are with a man who always tries to be there for his friends but he is never there for you, then you should know that even he doesn’t know what he feels. Maybe he thinks that his friends will abandon him if he is not there for them and that you will stay with him no matter what happens.

That’s why you need to show him that nobody can take you for granted and that you won’t allow any man to treat you like that.

This is one of the most common characteristics of a weak man and you can even see it at the beginning of your relationship. From the moment you start dating him, you will see whether he is hubby material or someone who will just take advantage of you and leave you to suffer in tears.

If he is selfish with his money or if he thinks only about himself in bed, unfortunately, you are dealing with a selfish man. He doesn’t even care what you feel or think but everything always needs to be his way.

5. He never gets offended by others

One of the traits of a weak man is that he never gets offended by anyone. In fact, most of the time people offend him but he doesn’t want to engage in any conflict with them.

He would rather keep quiet and turn his back on all the problems he has. He is afraid that he will lose those people around him if he says he doesn’t agree with them. And that is the worst characteristic of a weak man.

6. He never stands up for you

If he never stands up for you when people talk badly about you, he isn’t worth being a part of your life at all. Only a weak man would do that to the woman who decided to spend the rest of her life with him.

A strong one would cherish you and remind you every day how blessed he is to have you in his life. But if your guy never gives you what you need then you shouldn’t put up with that. Life is too short to waste it on someone who can’t even make up his mind about you.

7. He doesn’t show his emotions

If your man doesn’t show his emotions, you won’t be able to know how he feels and that will create a gap between the two of you. If he is weak, he will try to hide things from you and he will never let you know what he thinks about you.

Even if he doesn’t like something about you, he will never say that but he would rather be passive-aggressive and in that way torture you even more. Also, a man like that is not an ideal partner and he will not provide you with the love and affection you deserve.

Another characteristic of a weak man is that he is lazy and lets you do all the work, no matter whether it is in your private or business life. He thinks that you are strong enough to handle everything but he never asks if you need some help.

With that kind of behavior, he just shows his laziness and he makes you think that he is incapable of anything. He doesn’t even care if you are tired or if you can do everything that has to be done for you and him; instead, he has his own universe, where he is the main protagonist, while you are not so important to him. 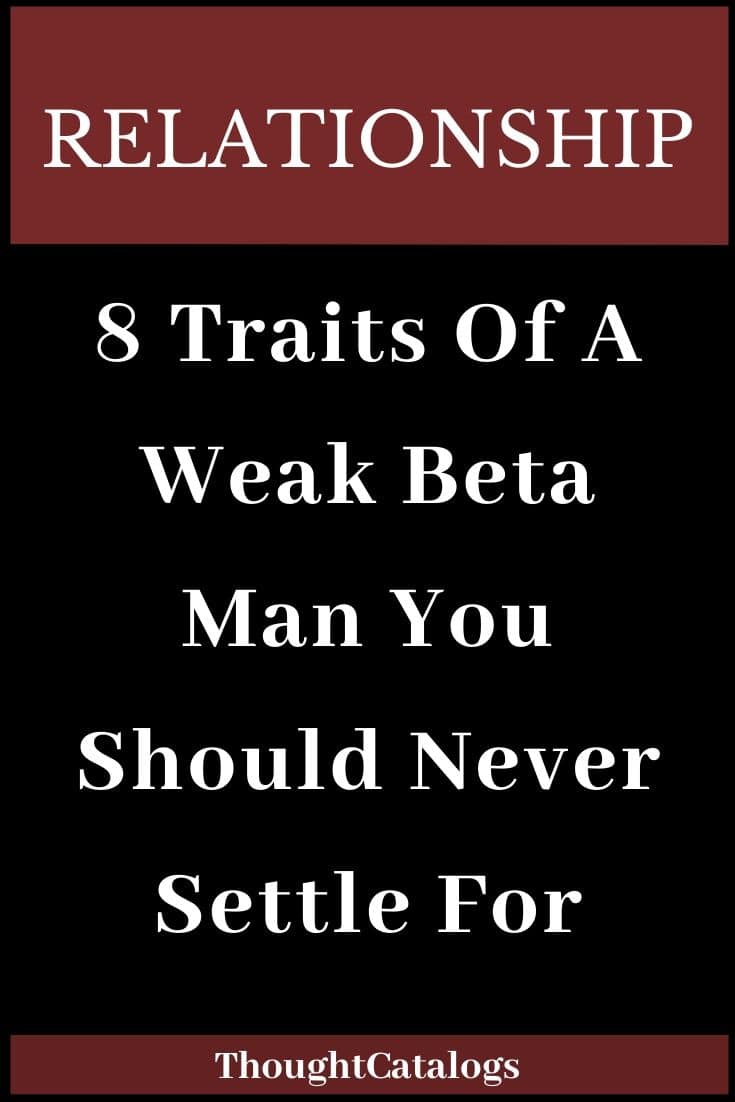 5 Horrible Ways In Which Dating A Toxic Man Changes You