Maybe he stopped texting you because he is super busy at work and he can’t take a break to talk to you. You don’t need to panic right away but wait until the evening and then see what happens.

If he doesn’t reply after he has got home then you can text him to see what is happening. I am sure he will have a reason good enough for not contacting you. And if he already showed you that he likes you, you don’t have anything to worry about.

2. He thinks you are pushy

Some women can be very pushy, especially at the beginning of a relationship. And some guys really don’t like it. So, whatever you do, don’t smother him with texts. Let him make the first move.

He is the one who should make an effort if he wants to win you over. Play hard to get for a while and if you see that he is a good guy, then give him a chance. And yes, ‘smother’ him in person, I bet he will prefer that more.

3. You said something that offended him

Maybe you have said something that is not bad at all but it offended your guy and now he just needs some time to think about it. There are things that men and women don’t understand in the same way so don’t be too harsh on him.

Just give him some time and he will get back to you. And once you get to know him better, you will know what things he likes and which ones can piss him off.

4. You are always the first one who gets in touch with him

I understand that you like that guy and that you would like to talk to him non-stop. But pump your brakes for a second and think like a guy. If he sees that you are always the first one to text him, he might lose interest in you.

So wait for him to text you first and show him that you have a good life even if he is not there. Don’t let him see you are depressed when he is not around but behave totally normal, no matter how much you like him.

5. He doesn’t want the same thing as you do

Maybe you want something serious and on the other hand, he just wants something casual. That can be the reason he stops texting you even if things were fine between the two of you.

If nothing changes and you see that you are the only one trying, sit and talk to him openly. It is okay if the two of you have different expectations but it would be nice for him to admit that to you. You surely don’t deserve someone who will string you along and make a fool out of you.

6. You are only his booty call

Guys can be very sneaky and make you believe they really care about you. So, if he texts you only late at night and all his texts have a sexual context, then you should know that you are only his booty call.

Maybe he is texting other girls at the same time and he just waits for replies from all of you. You shouldn’t put up with a guy like that, not even for a second, so tell him to back off and live your life in peace. Bear in mind that it is better to be alone than in bad company.

7. You shared too much personal information with him

If you told him your life story and you don’t know him well, chances are that he might be scared and that is the main reason he doesn’t text you back. That’s why you should never share anything important with a guy until you get to know him better.

A guy gets cold feet when a woman he likes opens up to him because he thinks she wants to get married immediately. I know they think in a strange way but that is how they are.

8. He is already in a relationship

It hurts but it is true—some guys will text you only to see if you will fall for them. And when that happens, they will totally play the ghost. They will pretend that you don’t exist or they will figure out that you want a relationship with them.

Guys like that are real jerks but they will do it with a lot of women just for an ego boost. They will do it no matter whether they are in a long-term relationship with you or not. It is like a drug for them and they can’t control their behavior. 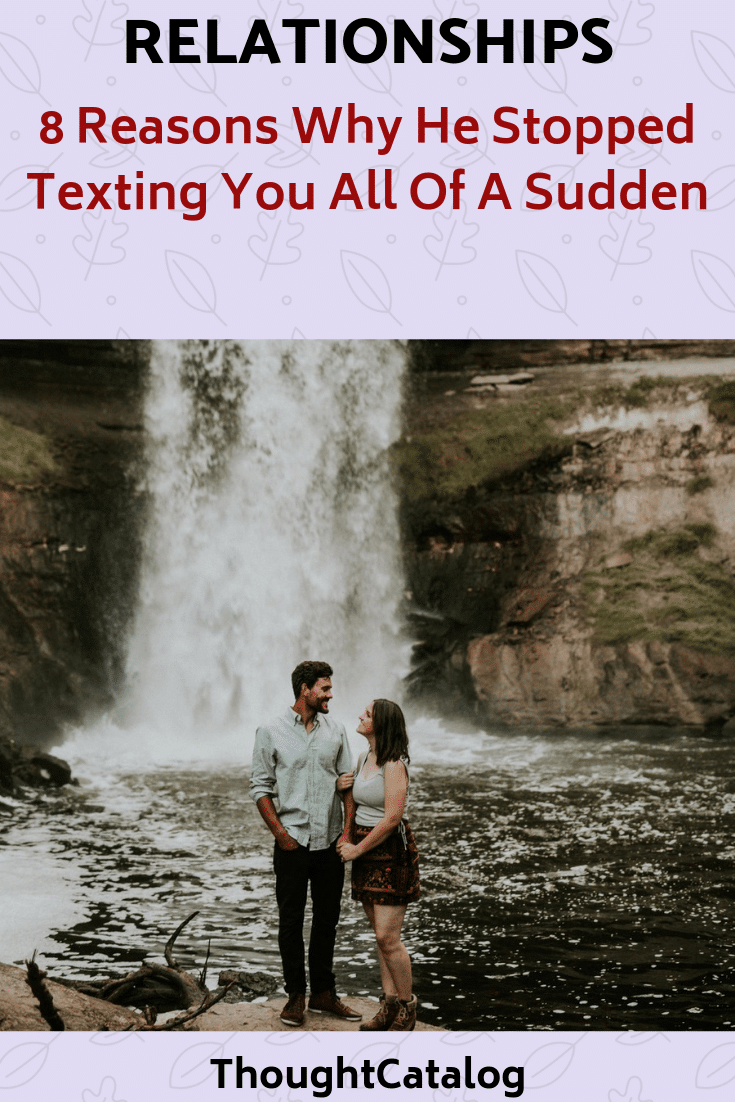