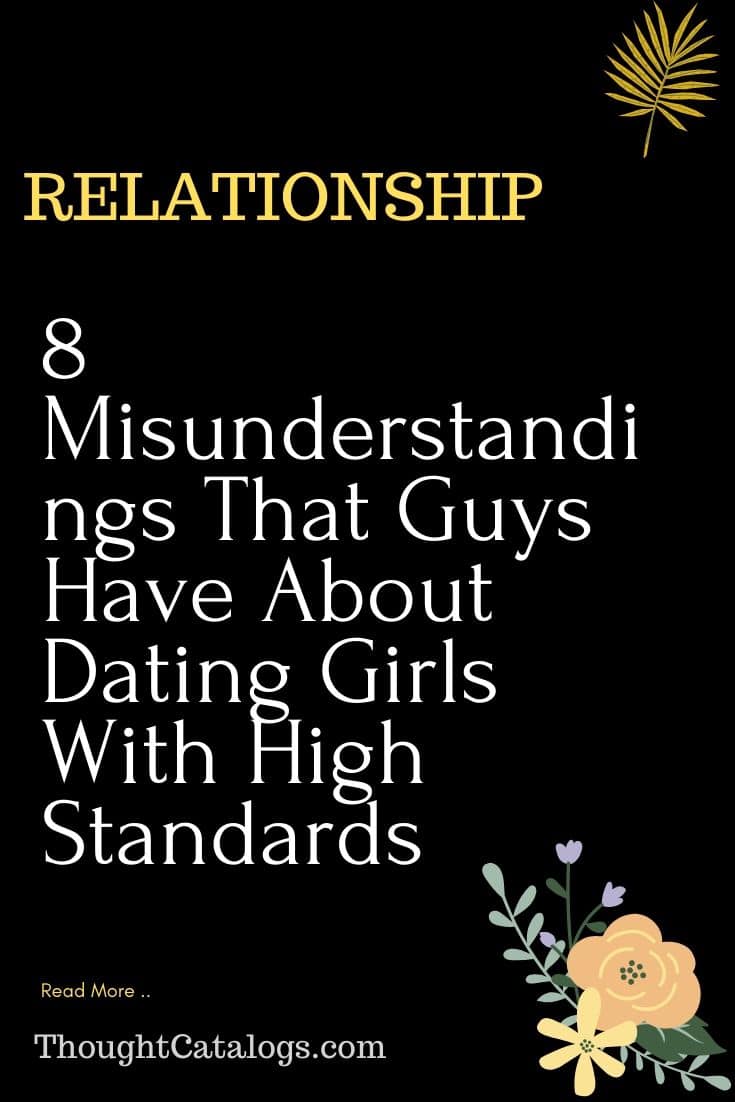 A lot of times, girls who have high standards in relationships and in the dating world often get a bad reputation from guys.

The thing is that guys don’t really understand the concept of having high standards at all.

They immediately start thinking that a girl is full of herself or that she’s making a big deal out of little things.

Or that she’s playing hard to get deliberately just to seek their attention. But none of this is true!

The only truth is that girls with high standards are girls who know their worth and they simply won’t put up with anybody’s bullshit!

Girls with high standards are confident. They are not ashamed to contradict you if they think that you’re not right.

They aren’t satisfied with mediocrity.

They are also grounded and always ready to receive criticism because they know that is the only way to improve.

Too bad that all this time guys have been too blind to see the real truth about these strong and inspiring girls with big hearts!

But now is the time to open their eyes and talk about these 8 common misunderstandings that guys have about dating girls with high standards!

1. “They care too much about trivial things.”

Many guys think that girls with high standards are all about overthinking the smallest of details in their relationship, which is totally incorrect on so many levels.

The truth is that these girls really care a lot but they care only about essential things!

When they are in a relationship, they always make sure to give all of themselves into it and that is why their expectations are raised as well.

No, they don’t occupy themselves with stupid things like how many times you texted them first or similar but they will notice if you don’t text them at all.

They will notice if you’re constantly letting them wait on you and they will certainly not tolerate it.

2. “They only want the most expensive and luxurious gifts.”

Do you guys really think that girls with high standards are all about expensive gifts and luxury?

If you do, please, think again. The only thing that these girls want is your trust, time and reciprocity!

And the majority of guys are not ready to give any of these to them and that is why they invent this lie of them being gold-diggers so that they have an alibi for not making an effort to win them like real men do.

3. “They are difficult to connect with.”

No, they are not difficult to connect with.

They are just not interested in your lame pick-up lines like, “If you were a steak, you would be well done,” that you already used on every single girl you’ve approached so far.

And they certainly don’t want to wait for your little tricky games and manipulation.

4. “They think too highly of themselves.”

This is probably the first thing that comes to the mind of every guy out there when he hears the words ‘a girl with high standards’.

They protect their heart because they’ve been disappointed multiple times by someone like you who didn’t understand them.

They don’t think highly of themselves. They just protect their soul by deciding not to tolerate any bullshit from you.

5. “Their expectations are too high.”

No, they don’t expect you to go out of your way and scream their name from the biggest skyscraper or shower them with thousands of roses every day.

The only thing they expect from you is to be a real man who will stick to his decisions and who will not disappoint them.

The only thing they want from you is to be there when they need you.

No, they don’t expect you to be perfect because they themselves know that they are far from it.

They just want to see that you are making an effort and that’s all they want from you.

6. “They are intolerant of other people’s behavior.”

There’s a huge difference between being intolerant of other people’s behavior and being honest and brave enough to show them when they are not right.

Having high standards means not having any problem letting people know what you really mean.

Having high standards means being genuine, honest and supportive to the bone.

No, they are not intolerant of other people’s behavior. They just choose to live in a healthy, honest environment without any toxicity or lies.

No, they are not self-centered and they don’t think that the world revolves around them.

They just want the best for themselves and the people around them.

They are tired of being manipulated and that is why they wisely choose whom they are going to trust.

Their ultimate goal is to establish a healthy relationship with someone who is willing to reciprocate.

Their ultimate goal and wish is to help everyone become the best version of themselves and if that’s called being self-centered, then I’ll make sure to buy another dictionary.

Just because they don’t fall head over heels for every guy out there who ever talked to them, it doesn’t mean that they are too picky!

Maybe they are single because they are not interested in almost romances. Maybe they choose to be single until the right one comes along!

Having high standards doesn’t mean being too picky.

It means being aware of what you really want at that moment, being in touch with your feelings and desires and not being afraid to live life as you please!

Today’s Daily Horoscope For Each Zodiac Sign: Thursday, May 28, 2020

Astrology Signs Ranked By How Good They Are At

The 6 Most Selfless Zodiac Signs Of All: Are You One In August 2020?

What Strengths and Weaknesses of Every Zodiac Sign In 2021

What Each Zodiac Sign Means When They Say ‘I Love You’

A Guy Who Does These 5 Things Doesn’t Deserve A Second...

ThoughtCatalogs - November 21, 2019 0
Shit happens, relationships go through painful ordeals, and people make mistakes. That’s the course of life. So it’s really not the end of the world...