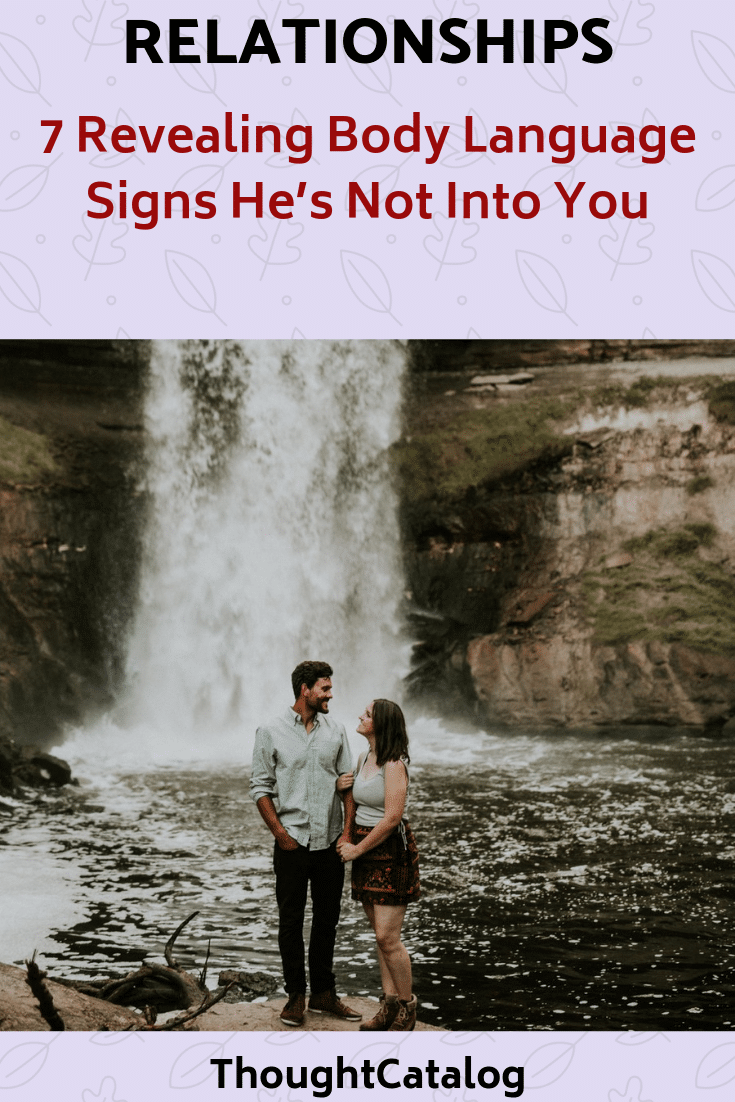 Sometimes it is really hard to decipher men. On your first date, you guys have a great time, everything seems perfect and all of a sudden, BOOM! He starts acting weird with some lame excuses that he is too busy or similar. Eventually, he stops answering your calls.

You wish someone could tell you what is going on in his head. You were quite sure that you were a perfect match and now you start doubting your own thoughts. To prevent this, pay attention to his body language. You will be amazed how much you can learn about a person only by observing them.

So, the next time the two of you meet, observe the following body language signs that will reveal his true nature and indicate that he’s not that into you:

You’re telling him some interesting stories about your childhood while his eyes keep wandering and he simply cannot look you in the eyes. This indicates that he’s not that interested in what you have to say to him (if you’re sure that he’s not an introvert). That’s why he cannot concentrate on you or what you’ve been talking about.

Another sign is if he’s looking at you but cannot hold his gaze longer than two or three seconds. After that, his eyes keep wandering and he has that weird facial expression, pretending he’s actually listening to you.

If his arms are crossed (but first make sure that he’s not cold), it means that he’s subconsciously trying to create some kind of a barrier between the two of you. His mind orders him to do it because he doesn’t feel that comfortable and that is why he’s subconsciously creating a barrier in order to retreat.
An additional indicator is if he’s not that engaged in the conversation and you’re the only one initiating it.

The smile is the most powerful tool that can say a lot about our mood or intentions. A genuine smile does not require effort. Your cheekbones naturally rise, your eyes become sparkly and you look genuinely happy. A fake smile is the total opposite.

You’ll know he’s faking his smile if during the conversation he seems like he’s trying too hard to smile. His smile is far from genuine and it looks ridiculous to you. It means he’s just trying to be polite but he’s not into you.

4. His body and feet are not pointed in your direction

Men usually sit with their legs open when they like you and enjoy your company. I know it sounds weird but it’s true and they’re not even aware of it. If his legs and feet are not pointed toward you, he’s indicating that he would rather be somewhere else.

His body is subconsciously trying to find an exit and that is the reason why his feet are pointed toward it instead of toward you.

Another interesting indicator is his nose. If he’s constantly touching his nose, it means that something negative is going on in his head. It can also mean that he’s lying to you. Additional indicators are fidgeting and being unable to keep his cool.
So, pay attention to his nose in order to recognize these subtle indicators that can help you reveal the truth.

If you’ve ever observed someone trying to solve a difficult task (be it an exam or something else), you’ve probably noticed how they start scratching their hair in order to find a solution for that particular problem. That way, our body indicates that we’re confused. We don’t know how to solve the problem and it’s making us feel uneasy.

So, if he starts scratching his hair, know that something’s going on in his head. He’s probably not that into you and he’s confused by you and his mixed emotions. He doesn’t know how to react.

7. He’s sitting on the edge of his chair

Does his sitting position appear very unnatural to you? Is he sitting on the very edge of the chair, like he’s preparing to be catapulted to Mars? If the answer is yes, his body is trying to tell you that he’s tense and he doesn’t feel comfortable around you. His body indicates that something’s wrong and that he is most probably not into you.

But this one is tricky. It can also indicate that he’s head over heels for you and he’s very excited about everything you’re about to say next. If you’re not sure, check other signs to confirm your doubts.

Before coming to a conclusion, make sure that all of these body language signs (or some of them) are followed by other relevant indicators, like the way he talks, his overall demeanor and behavior.

This Is The Top Relationship Deal Breaker For Each Zodiac Sign