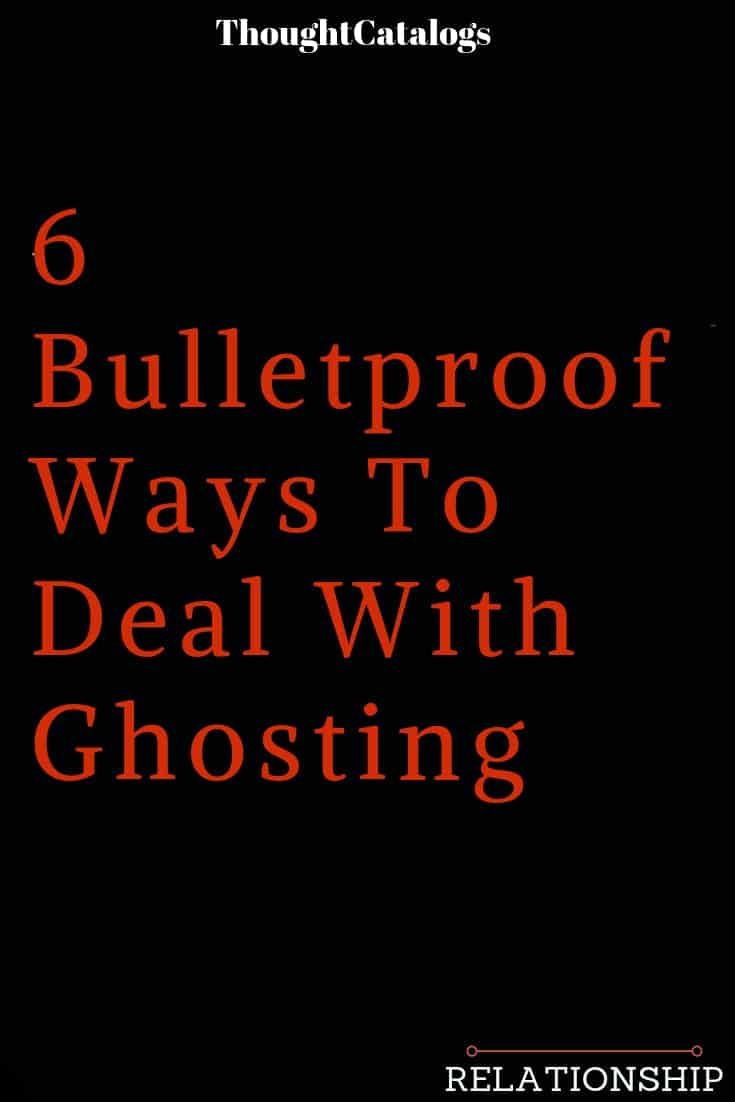 You know how the story goes – you meet a guy, he’s wonderful. You think that you’ve found the one because you click instantly. Your interests are the same, he acts normal, he does not look like a total douche.

You go on a couple of dates and finally, you sleep with him. Now, this would be a perfectly normal story with a happy ending if it weren’t for this last activity or better said the lack of one.

After he sleeps with you, you begin to hear less and less from him. In time, your phone doesn’t ring as much, you never get to see him. You begin to feel invisible and the truth is, in his eyes you are invisible.

You’re being ghosted for the simplest reason ever. He took what he needed from you and he rejected you.

It would be so easy to keep your calm in these situations and just ignore it, but emotions are never easy to deal with.

Your brain is telling you what you should do, the right thing to do and that is to let go and move on, but your heart is still stuck on him because you’re not an emotionless robot who can move on from one person to another with no strings attached.

Well, this is the harsh reality of modern dating and it’s called ghosting. A guy hooks up with you and then he just disappears with no explanations whatsoever, like nothing ever happened between you two.

What to do in those situations? How to act when you’re being ghosted?

You didn’t even have to care about the person who ghosted you, but your feelings were hurt. You thought that something is going to evolve from your relationship. But instead, you were humiliated and played.

You probably told your friends all about him because you were excited about your new relationship and after some time, nothing happened. He disappeared and ghosted you.

You felt exposed and hurt. Embrace that pain, accept it because it’s real. You can easily get over him, but you can’t get over the pain in a jiff.

2. Cut off any communication

Don’t fall into the trap most women do. Don’t text him or try to call him. If he doesn’t text you back after the first text, he isn’t interested in you anymore. Don’t make a fool out of yourself because you still have feelings for him.

The fact you were ghosted says nothing about you. It’s not your fault and don’t look at it that way. You did nothing wrong and the silence you’re getting is just a reflection of the person doing that to you.

So instead of blaming yourself and dwelling why he ghosted you.

Think about ghosting and try to analyze what happened and how it happened so you know what not to do next time.

Take this painful experience and use it for the future, for your own sake.

4. Be kind to yourself

You’re experiencing pain and pain has to be horrible. You have to feel crapy, but don’t let it get you down. The reason you feel that way is only the proof that you’re human. It proves that you are able to feel and hear all the emotions running through you.

The reason you feel this way is because you care and you’re capable of love. Too bad that this time, you’ve stumbled upon the wrong man to love. There are plenty of men out there ready to commit, ready to love.

Don’t be hard on yourself because it’s not your fault he is an immature jerk.

5. Respect yourself and move on

What is gone, you cannot miss. He could have done things differently. He could have left in a respectful manner with an explanation, but he didn’t. He chose to leave without saying a word, he chose to hurt you.

That’s it, the story’s done. You don’t need any explanation for why things happened the way they did. What you do need to do right now is to move on. Respect yourself enough to find the strength to forget he ever existed.

You are worthy of a man who will love and respect you. You deserve a man who would never be such a coward to do something as disrespectful as he did.

6. Go back to dating

At least now you can recognize a ghoster. You’ve gone through that behavior pattern and it’s not likely someone will do the same thing again. So, get back out there and date.

This experience has made you even stronger and smarter. All the bad things that happen you should be a lesson. It is a mistake that you’re never going to do again.

Don’t let the possibility of getting ghosted prevent you from creating a new and meaningful relationship. If you keep living in fear of getting hurt again, you’re never going to let yourself be happy.

Here Find Out Your Amazing Zodiac Signs and Your Hidden Magic.

How Venus In Gemini 2020 Will Affect Your Love Life, According To Your Zodiac Sign In June 2020

The Dark Side Of The Zodiac: What Circle Of Hell You Belong In, According To Your Sign in 2020

Your Zodiac Sign Says About Your Love Life This November 2020

ThoughtCatalogs - January 22, 2020 0
How to know if a guy likes you? Well… do you have a whole day? Just kidding! The male brain can be quite a peculiar thing at times...