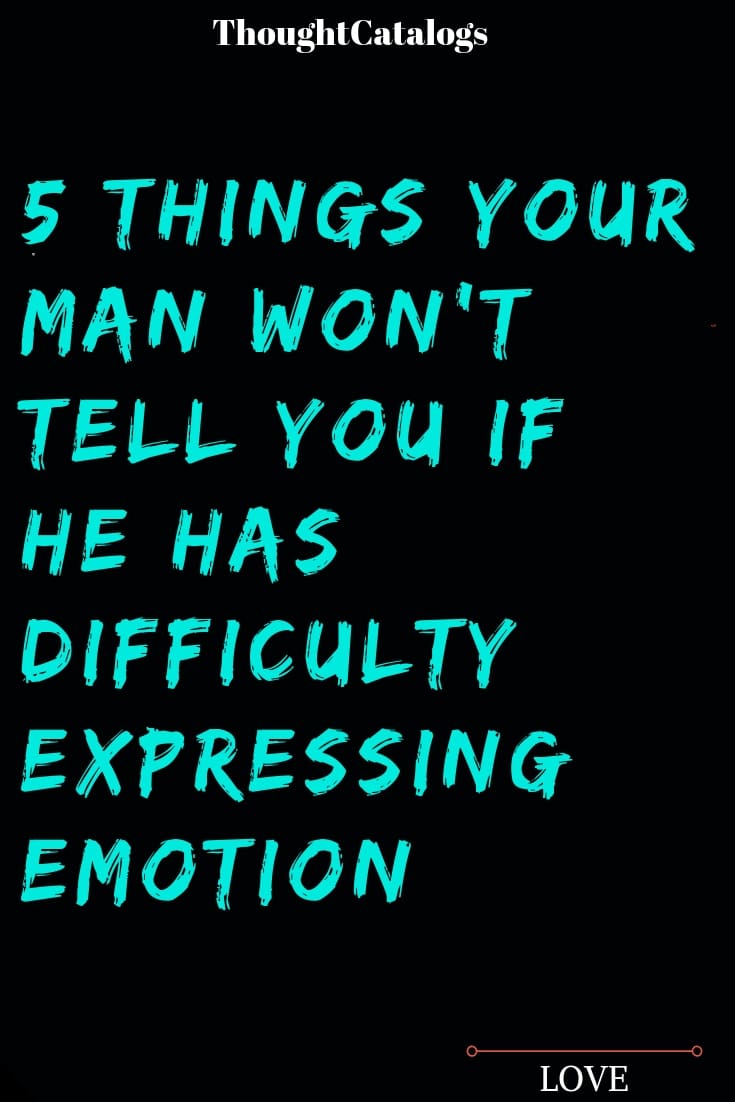 There are things we all want but are hesitant to share with our partner. It can be the littlest things, like their habits and behavior, all the way to the big ones, like life together and marriage.

Not every man is good at expressing his emotions and that’s okay. Men are always taught that the tougher and colder they appear, the more ‘manly’ they are.

This couldn’t be further from the truth but sadly, many men follow this rule.

So your man may not be as forthcoming about everything as you’d like him to be.

He may have trouble with saying certain things because he fears he’ll be less of a man. That’s just the sad world we’re living in right now but there is hope for a change.

You can’t really do much about that right now, it’s all on him. He needs to realize that sharing feelings and being open and honest about those ‘cheesy’ things is not less manly, it’s just being a mature grown-up.

Until he figures it out and starts sharing things with you on his own volition, I’ve collected some interesting things men are typically hesitant to share with their partner, because they are that bad at expressing their emotions.

Luckily, you don’t need to read his mind, you just need to keep reading this and see what it is that he’s keeping from you. You’d be surprised at some of the things they want but are too afraid to tell you. Here we go!

1. He is invested but mentioning marriage very early on makes him want to back off

He is invested and committed to you and your relationship. He deeply cares for you and has nowhere else to go, nor does he want to!

He’s all yours. BUT, if you keep mentioning marriage and wedding bells too early, he’s going to panic.

And rightfully so! Not everyone is on the same track and for some people, it takes a bit longer to get to a place where talking about marriage is the logical step. It’s a big deal and you need to take it slow and not rush things.

If you push it too soon, you’re going to scare him away. Back off a bit and let things develop at their own pace. He’s not going anywhere!

2. He wants you to be s*xu*lly adventurous but he doesn’t want to sound like a creep

Many men enjoy their women being freaks in the sheets! But not all of them are comfortable saying it out loud.

It may make you feel like he’s weird or something, so they choose to stay quiet.

Learn to read between the lines. Know your man. He probably wants you to take control every now and again and surprise him with a little roleplay. It doesn’t mean he wants it every night, just sometimes to spice things up.

Men who have trouble expressing their emotions will never tell you this, so help him out and be a little freaky when it’s just the two of you. He is going to LOVE it.

3. He can’t read your mind and it drives him mad when you expect him to

We women can sure be tough as hell sometimes. We tend to expect guys to read our mind and know exactly how we’re feeling and what we want, instead of just saying it outright!

And not surprisingly… men hate this! Just tell him how you feel. Tell him what you want.

Share with him what’s bugging you and he’ll be the best boyfriend ever. But don’t expect him to be a mind reader. He’s not and it’s not fair to hold it against him.

Be as open and honest with him as you want him to be with you. It works both ways!

4. He needs (and deserves) his space and it’s not okay to hold it against him

Just like you, me and a billion women out there, men deserve their ‘me-time’ as well!

Let him off the hook sometimes and just leave him to do his own thing. He needs his time and space to unwind.

You do too and I’m sure he lets you. So understand that men are just as entitled to their space as we are. They’ve got shit in their life too.

They deal with lots, just like you and me. And they need to be able to process it all uninterrupted.

So don’t hold it against him if he asks you to just have a day for himself. That’s just what he needs to get his shit together and when he comes back to you, he’ll be completely recharged.

He’s only human, you know. And at times, life gets too hard.

Let him deal with things in his own time, in his own way. I promise it will be the best thing for both of you.

5. He doesn’t want you to agree with him on everything, express yourself openly

He doesn’t need somebody who won’t stand her ground when he’s opposing her.

It’s fine not to have the exact same opinion on everything! It happens and it’s perfectly normal.

Disagree with him. Challenge him. Don’t let him have his way every time. He wants to see you fight for your beliefs and your passions.

Don’t think that it will push him away. On the contrary—it will make him crave you that much more!

Men love women who stand their ground. They love women who aren’t afraid to get their hands dirty. Just because he won’t tell you that doesn’t mean it’s not the case!

He doesn’t want to you think that he’s encouraging fights. All this means is that conflicts will happen and when they do, don’t be scared to say what you mean.

The only thing it will do is bring you closer together. Make him see what a ba dass b**** you are and he’ll want you more than ever.

The Zodiac Signs When DRUNK…

This Is How Each Zodiac Sign Deals With Being Ghosted

14 Early Signs That He Is Not The One For You

I Still Love You Although You Are Toxic

ThoughtCatalogs - January 14, 2020 0
Shhh, I am trying to make my thoughts stop arising. I am trying to quit thinking about you because every thought about what we...