So, you’re really into that one guy you find special and you think he’s the right one for you, but you’re still a bit cautious because you don’t want to fuck things up. And you shouldn’t be alarmed – this is completely normal.

After all, if you’re really meant to be, your decisions won’t push him away from you, but bring him even closer!

So, stop looking for excuses only to validate his behavior. If you’re afraid to ask a guy for these 10 things, then you know you definitely shouldn’t be with him!

Many guys out there are either players or commitment phobes.

And what makes the situation even more difficult is that you can seldom predict if he’s a player or he has commitment issues.

So, you keep dating not knowing what’s next, and when it happens, it happens too late.

You see, commitment is something you should never be afraid to ask for and if you are, it means he’s not the right one for you. Why?

He would make sure to make you his and only his.

Remember that any guy who pushes you into doing something you’re not comfortable with, is not worthy of you.

If you’re afraid that he will turn his back and abandon you when you tell him that you need some time before getting intimate, then you know you’re better off without him anyway.

You deserve someone who will appreciate you and your body, and not only think of himself.

Are you looking for someone to build a future with? Then you shouldn’t be afraid to say so.

If you’re not interested in casual romances and you’re afraid that this might turn him off, you should run as far as you can from him.

If he’s subconsciously forcing you to do something only to keep him, it means he’s a dirty player and you should be wiser!

You deserve to build a future with someone who wants it as much as you and nothing else should matter to you.

4. To make you his priority

If you feel like everything and everyone is more important to him than you, then you shouldn’t be afraid to tell him so.

You’re not his toy and you’re not there to fulfill his every wish. You’re a human being and you deserve to be put on his priority list.

And if he’s unwilling to do so, then you shouldn’t beg for it either.

If making you his priority doesn’t come natural to him and he doesn’t even consider it despite your complaints about it, it means he’s too off and definitely no good for you.

Some women are comfortable with the concept of an open relationship where you date multiple people at one time.

But, if you’re not of them, that’s nothing you should be ashamed of.

If you want to be in a monogamous relationship, you should say so – it is your right and you should always listen to your inner voice.

You shouldn’t discard your feelings and go against your values only to appease his ego.

And if you’re afraid to tell him for fear that he will head for the hills, then you know he’s not the one for you and you should move on.

It doesn’t matter if you’ve just started dating or already been in a relationship for some time, there will always be some situations where you will say something insulting or something you didn’t really mean.

There will always be situations where you will hurt each other, and apologizing for it is a must if you want to continue building a happy and healthy relationship.

But, if he doesn’t apologize and you’re too scared to ask him to do so, you know you’re with the wrong man.

He should never take your happiness and respect for granted. And the sole fact that you need to ask him to apologize is enough in itself.

If you desire to have children someday in the future, you should be free to say so.

And if he doesn’t agree with your decision and he can’t promise you that he would want to become a parent one day, then you know what to do.

Deciding on having kids or not is an important thing and you should never compromise your wishes only because you fear that you will eventually lose him.

If you choose to stay with him even though you know that he’ll never want to become a parent, you’re deliberately depriving yourself of happiness.

You said something you didn’t really mean and you’re genuinely sorry for it, but you’re afraid to seek forgiveness because you think you will be rejected.

No person should ever fear asking for forgiveness when they are genuinely sorry (especially if it is not a big deal and especially if you have forgiven him multiple times so far).

If you’re afraid to ask for forgiveness, it means he’s definitely not worthy of you.

Respect is our human right from birth and you should never even think about staying silent regarding any kind of disrespect or mistreatment.

If you’re afraid to speak your mind and tell him that you deserve better conduct and respect from him, it means he’s in a way emotionally abusing you.

And you definitely shouldn’t accept such treatment in return!

If it is evident that he is taking you for granted and never does anything to make you feel special, it means he’s a selfish and egocentric low-effort prick.

And if you’re afraid to acknowledge it to his face, it means he’s even bigger prick and you should make a run for it ASAP.

Remember that real men don’t make excuses – they make an effort without you even having to ask them to do so.

So, wait for a man who will show you the real meaning of making an effort and who will never let you down, no matter what! 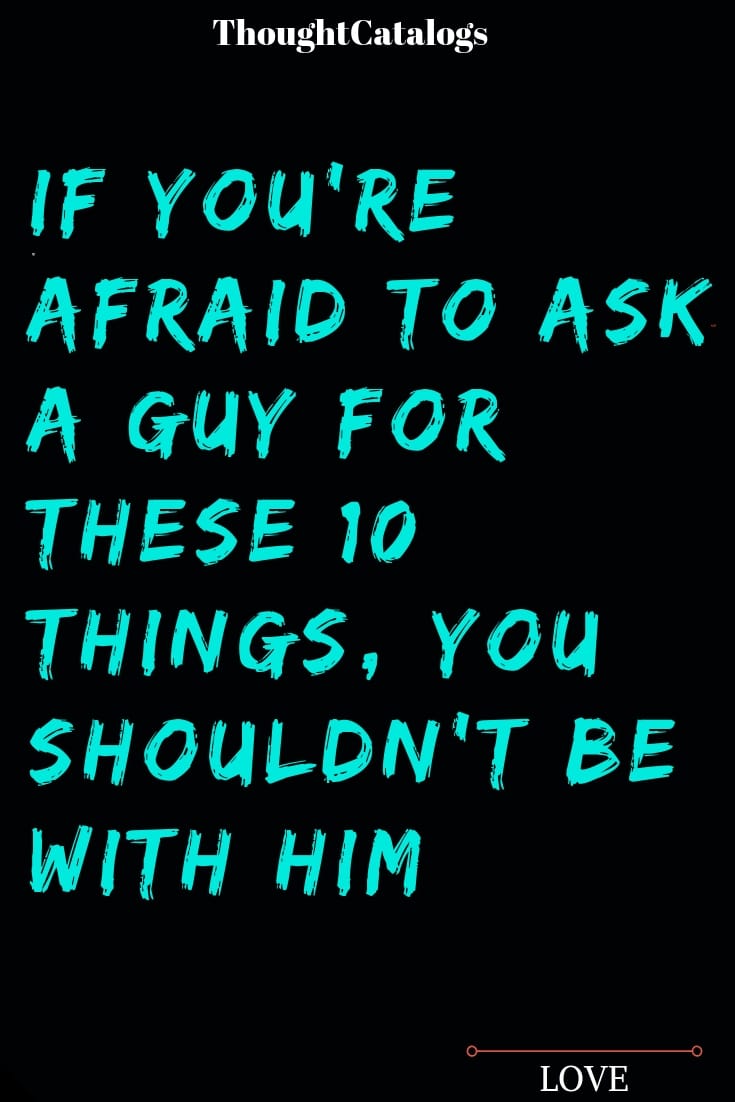