Guys and girls have different ways of communication. For girls, conversation is the glue that keeps the relationship together, while guys use it as a means to an end.

Guys don’t feel the need to communicate as much as girls do. They can sit together for hours, watching the game with their buddies, and leave feeling fulfilled and connected to them. When they use words, they can often be interpreted a little differently from what they seem. Here are some common things they say and what they ACTUALLY mean:

What it actually means is that he spends most of his time at home (he probably lives with his parents), unemployed, trying to make ends meet, but it’s better to say that than to admit the real truth and scare you away.

Of course, it’s not okay that he feels the need to lie to you but you can sort of understand that he probably just wants to leave a good impression because he really likes you. Who knows, maybe he actually does manage to find a job in the near future, so you can cut him some slack. He’s probably trying his best.

2. ‘’I’m not that hungry, we can skip the restaurant if you want, and just go to the movies.’’

This means that he probably overestimated his budget and is trying to find a way to get out of spending a weekly allowance on one meal.

If you hear him say this, you can play along, maybe just go get a burger and see a movie. We’ve all been in those situations so there’s no need to hold it against him. If money’s tight, there are other ways to spend quality time together than eating overpriced meals.

This is a pretty obvious one. What he really means is: I’d love to have sex with you on a regular basis but don’t expect me to call you the next day. I’ve got better things to do. Those things probably being playing video games and drinking 10 beers a day with his buddies.

If he says this, don’t expect much from him, unless sex is what you’re interested in as well. But if you want a meaningful relationship, steer clear of him. He’s giving you clear signals that it is the furthest thing from his mind right now.

Unfortunately, what this means is that he’s trying to get the hell out of there as soon as possible. He’s just not having a good time and wants it to end. There is a slight chance that he might be telling the truth but unless he mentioned earlier in the day those things that await him tomorrow, then he probably just wants to leave.

Don’t be offended, it doesn’t mean there is something wrong with you. Maybe you just didn’t click and he’s actually saving you both time, instead of wasting it, if he knows he’s not that into you. There are plenty other options out there.

What this means is: I hope you’re okay with only seeing me once a week.

The reason he would say this is when he probably isn’t sure if he’s that into you and wants to give himself space but also see you at times as well. This is a tricky one. If you think he’ll come around, keep seeing him and see where it goes, but if he really only ‘has time’ once a week, there is no point in sticking around. Get yourself a guy who KNOWS how to appreciate you and doesn’t have to make up excuses to see you only when he’s in the mood for a booty call. 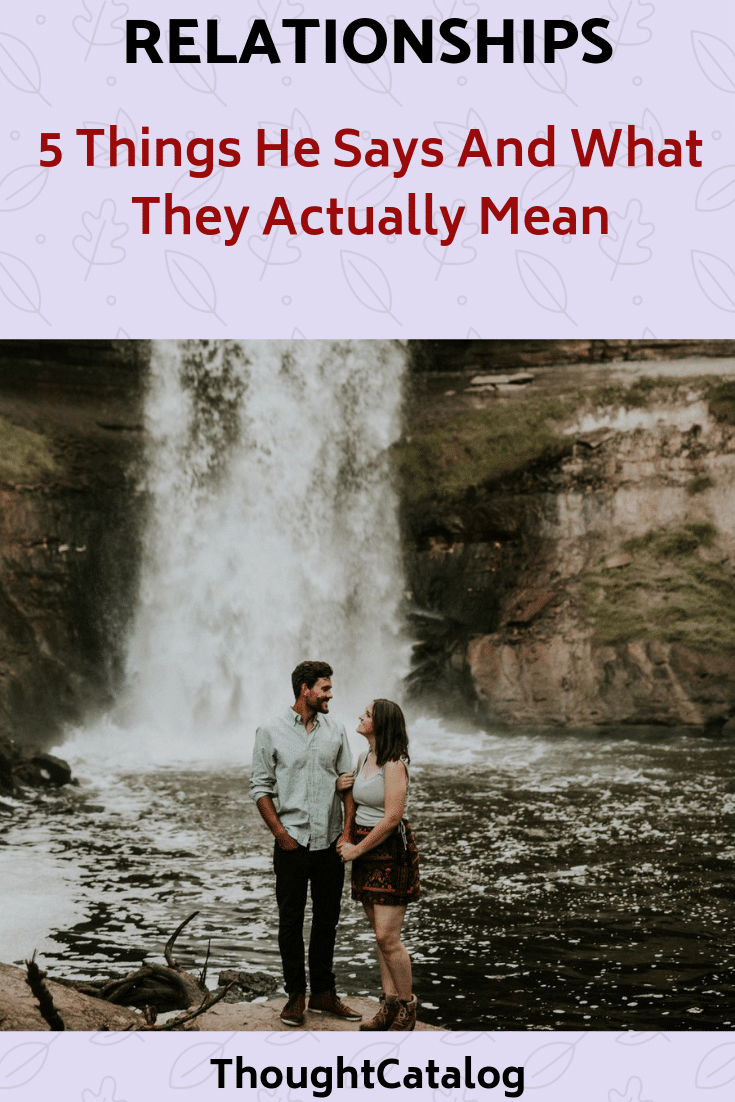 When Dating A Fearless Girl, Be Prepared For These 8 Things