They enjoy causing pain to others. Cruel people are the worst. They’re mean, nasty, vicious, and vindictive. It’s hard to have any sympathy for them or wonder how they got to be that horrible. And thanks to astrology, we can use the stars to find out just who the cruel zodiac signs, are and how to avoid them. Because no one enjoys being the victim of someone else’s cruelty.

There are those who say you have to be cruel to be kind, but you just have to be creative. If you’re trying to break up with someone and they refuse to get the hint, you think of something that would hurt them the most so they let you go.

But even if your intentions are good (you don’t want to hurt them any more than you have to), you’re still choosing the easiest option.

When you behave cruelly, there will come a time when you will be held accountable for your acts of cruelty. Everything we do has consequences.

People who are cruel get off on it a little; it makes them feel powerful to hurt others and, in some ways, they find it fun to cause other people pain. They tend to have very little empathy for others and no perspective on how damaging their cruelty can be.

They don’t take responsibility for the emotional havoc they create or how with their cruelty they can destroy lives.

Now, we’re not saying that if you were born under one of these zodiac signs that you’re pure, concentrated evil, but these signs do tend to have more cruel people than others.

5 CRUEL ZODIAC SIGNS WHO HAVE NO PROBLEM HURTING PEOPLE

Scorpios are the cruelest sign. They have no problem walking over people and/or manipulating them to get what they want. They have a cruel attitude and tend to lack empathy for the people they hurt as if it’s the person’s fault for getting in Scorpio’s way.

One of the things Scorpios do is to talk about the assumptions they have about you — your motives, intentions, and values — and react to them without finding out if those assumptions were true in the first place.

It’s hard to defend yourself when you are being accused of things that aren’t necessarily true. Scorpios likes to keep people off-balance so that when they strike, their victims crumble easily.

Cancers can become out-of-control with their emotions and highly possessive. If a Cancer feels threatened or as if they’re losing something or someone they love, they will strike out.

When they’re feeling this way, they become cruel and seem to instinctively know where to strike so it will cause the most pain.

Cancers seem to have no fear about the consequences of their actions and react without thought of the destruction they can cause. While they do feel guilt and remorse, it happens long after their cruel action.

You don’t want to mess with someone they love, because they won’t hold back inflicting pain on you in return.

Capricorns do tend to have a dark side, and when they go to that dark place, they throw out all their usual rules and ways of behaving. They will resort to cruelty if it can help advance them in their career or pay back an enemy.

They seem to enjoy other people’s misfortune and will gleefully recount a story where someone who wronged them in the past received their karmic punishment.

When empathy is absent and you enjoy someone else’s disaster, that’s schadenfreude and it’s a cruel attitude, to say the least.

Aries can be cruel with their words. They get angry or upset and then everything comes pouring out without a second thought of how it will hurt the other person or how it will make Aries look.

They’re also so competitive that they can be obnoxious and mean winners and the worst of sore losers.

Any kind of competition with Aries can set you up to experience their venomous and mean-spirited diatribes. Once they’ve cooled off or made their point, they’ll go back to being fun and charming, but it won’t be as easy for the object of their cruelty to recover.

Leos are so popular and charismatic that it’s hard not to love them. But as dazzling and commanding a Leo can be, if they feel threatened at all, they can turn on you and rip you to shreds.

Leos seem to know the exact thing that sounds okay on paper but will tear your heart out. They will play dirty and won’t hold back if they’re intent on destroying you.

It’s never a good idea to cross a Leo or to be disloyal in any way. Those kittens have claws, and when they get primal, they get cruel. 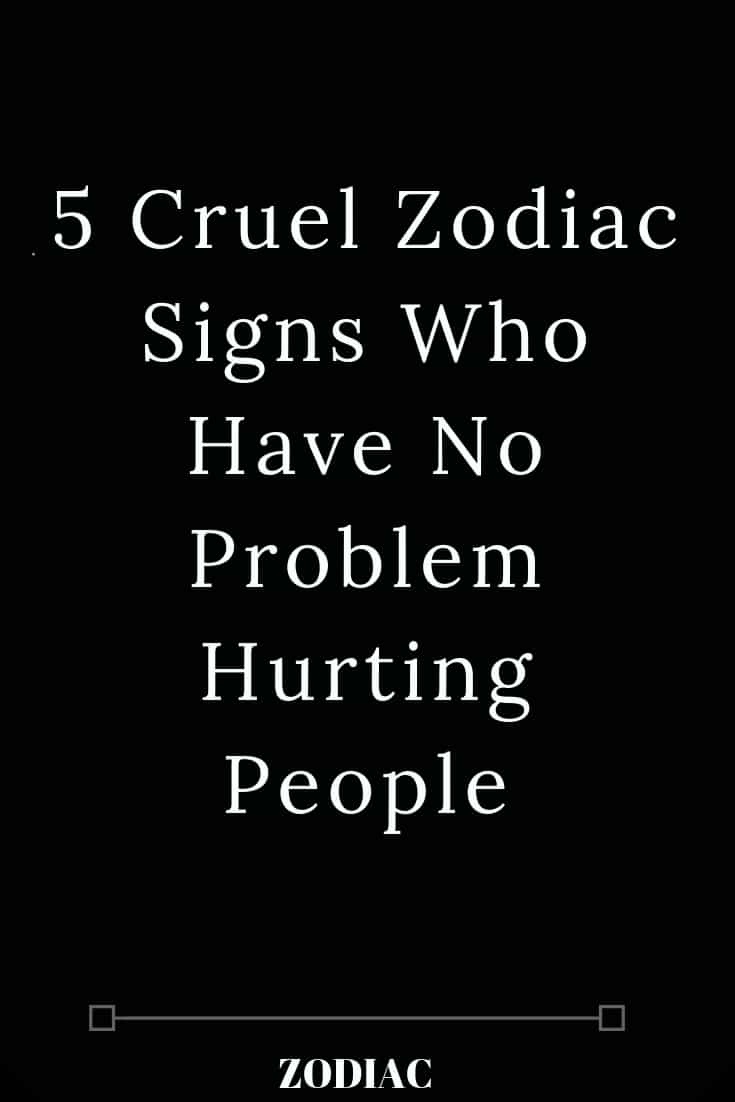 This Is What Makes You Happy According To Your Zodiac Sign