When you think about alcohol, one of the things you usually connect it with is honesty. You’ve always had the opinion that people are always the most honest when they are drunk.

After all, they don’t say ‘a drunk mind speaks a sober heart’ without any reason, right?

And it is simple—alcohol makes you become less inhibited and makes you lose a part of your self-control.

This usually results in people telling more truth and saying things they usually wouldn’t when they are sober.

This is the theory you especially stick to when it comes to this guy who comes and goes from your life.

The fact is that this man usually acts cold and uninterested during the day, when he is sober.

You two are in a kind of an almost relationship but it’s quite clear that you are the one who cares more.

He is the one who refuses to commit and who always puts you on hold while you’ve clearly grown to love him.

This man never puts you first and always treats you like just another one of his options.

He rarely shows any signs of affection or love for you and most of the time you have to beg for crumbs of his attention.

But all of this suddenly changes when he has a little more to drink. All of a sudden, he becomes the man of your dreams.

All of a sudden, he starts calling and texting you all the time. He becomes eager to see you and he tells you everything you’ve always wanted to hear,

And with time, his drunk episodes have become the highlights of your life.

You’ve started waiting for him to become like this because this is actually one of the rare times you get to enjoy this man’s love.

But is this really something you want for yourself? Is this type of relationship really making you happy?

I know you think he obviously has strong feelings for you and this is the time when he has no trouble expressing them.

You assume that his drunk personality is actually the real him and that he pretends not to love you whenever he is sober.

You keep justifying him and looking for excuses for his behavior. And his drunk calls and texts are actually holding you on to him.

They give you a trace of hope that this man has real feelings for you but that he is doing everything possible to hide them.

Well, even if this is true, it is obvious that he is a guy who isn’t capable of facing his own emotions and that he needs alcohol to do so.

And he is obviously too much of a coward to tell you how he really feels when he is sober.

But it is more probable that this guy doesn’t love you the way you think. I hate to be the one to break it to you but it is likely that you are just convenient for him whenever he drinks.

It is possible that he knows that you are the only one who will pick up the phone, no matter when he calls you.

You know you are the girl who won’t have any issue leaving everyone and everything behind just so you can run to see him or pick him up.

Whenever he goes clubbing, he probably tries to get into some girl’s pants and when he doesn’t succeed in doing so, his self-esteem lowers.

So the best way to heal his ego is to call you, because you’ll never turn him down.

Either way, the point is that this is not the kind of man who deserves a place in your life. You don’t need someone who will remember you only when he’s drunk.

Instead, you deserve a man who will proudly hold your hand in all circumstances and situations.

And you’ll never meet a man like this until you break things off with this guy. 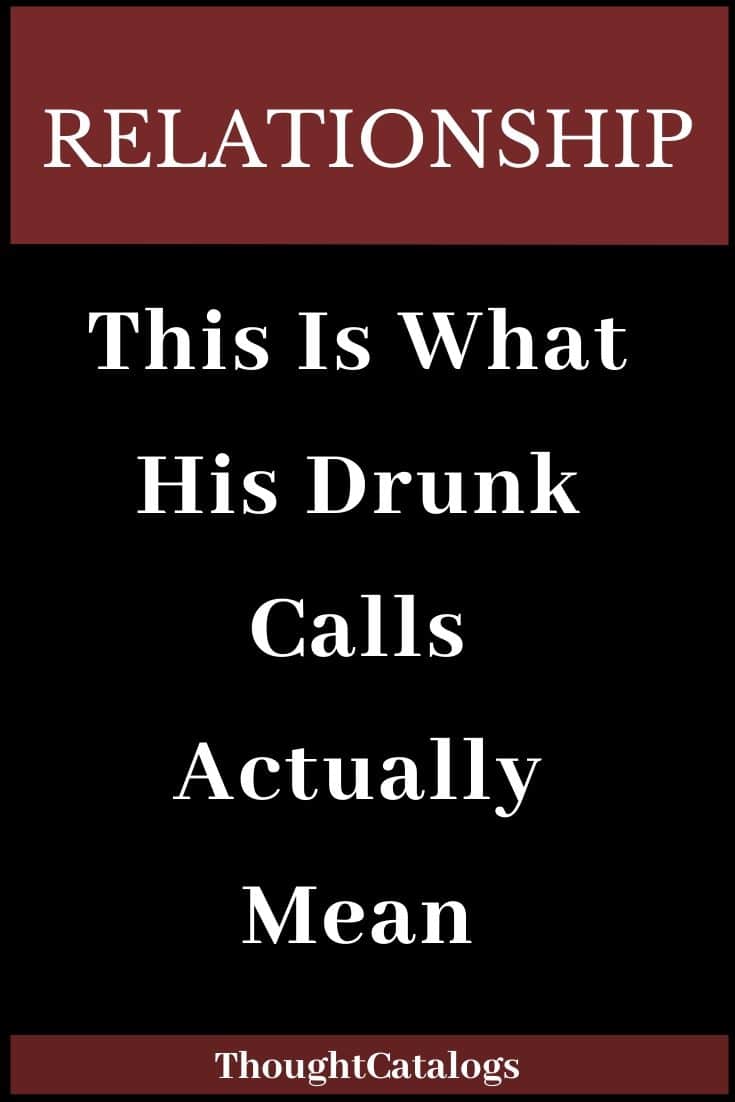 6 Reasons To Definitely Get Out Of Your Toxic Relationship

These Zodiac Signs Ranked From Most Psychic To Totally Clueless in 2023, Based On Zodiac Sign
19 mins ago

These 4 Zodiacs Who Will Walk Away If They Catch You In A Lie In 2023, Based On Zodiac
32 mins ago