Sometimes there are things that can be fixed. There are some periods when things are not so serious, when a relationship hits a rough patch, when they are not broken, just bent, so they can be fixed. Then there are those situations where women stay in emotionally or physically abusive relationships. The love they feel is keeping them from seeing things as they really are, broken beyond repair.

What keeps them hanging on to a toxic man is hope. Hope that someday things will change. That one day he will realize what he has in her and that he should try his best to keep her. I know because that same hope kept me in an already broken relationship for a long, long time.

I thought my love would be enough to fix us, to make us remember why we fell in love in the first place. I wanted to believe so much that there was something that could bring our relationship back to life. Because what we had by that point was anything but life, anything but happiness.

I tried, I really did. I figured the first thing I had to do was talk to him openly about everything. So I put all my cards on the table. I told him everything. I asked him to do the same, I knew I was not perfect, that some things might bother him.

I said I was sad and his behavior was making me into this miserable person I had never been before. I couldn’t stand his jealousy—it was suffocating me. Cheating never crossed my mind but he seemed to be jealous of every man in close proximity to me. He never liked me dressing up for work or going somewhere without him. He tried to cover it up but all I would get every time I went out with my friends without him was weeks of silent treatment.

He wasn’t like that at first, he was tolerant. We each had our own lives, and we had our own little universe. We hung out with other people and everything was fine. Over time, I saw hints of his jealousy. It was really amusing at the start, seeing him getting upset over nothing. I always believed that small, normal doses of jealousy were something human, something that couldn’t be helped, but he took it way too far.

He listened to me but he didn’t seem to realize what the problem was. He said I was blowing things out of proportion, that I was imagining things. That he was the same person he always was. That he didn’t know what jealousy was. That he trusted me. He lied to me and most probably to himself.

Jealousy was not the only thing, though; there were so many more things that were wrong with us. But I kept on thinking they would get better. I had faith in our love but my faith and all of my efforts weren’t enough.

I made it my life’s mission to make him happy but my happiness wasn’t something that seemed to concern him. He didn’t care how I was feeling or how hard I was trying. He thought the sole fact that we were together should suffice.

I completely lost myself in trying to make him happy. I became some pale version of myself. I always had a smile on my face and I couldn’t remember the last time I felt that smile was honest and coming from my heart. I pretended to be happy but I wasn’t.
I had no time for anything or anybody but him. And the irony of it is that he had no time for me. He was giving me fractions of his time and he always kept me waiting for him, begging for his time and attention. My friends and family hardly ever saw me, and when they did they couldn’t recognize me anymore. I didn’t even recognize myself.

I kept on trying to fix us. To work on us. But my best tries weren’t good enough.

Everything I said or did seemed to annoy him. I walked on eggshells around him but nothing I ever did seemed right. When he would say he would make an effort, it never lasted long. Everything would be good for around two days and the next hundred and two would be complete disasters.

I kept on replaying the same scenario until I couldn’t anymore. I had to face the fact that there was no fixing us. That I had stayed for too long and if I stayed another day I would lose myself completely. Leaving you was the best thing I ever did.

It wasn’t easy. I had days when I felt like calling you and trying again. But I realized I had given it my best. I fought and loved for the both of us. I tried not to waste our love and our years together but you never seemed to care enough. I am glad I resisted the urge to go back, and I thank God every day I didn’t.

I should have realized that there was no fixing us. Because you can’t fix something that’s already broken. The only thing I regret is not letting go of you sooner. Now that I have my life back, that I have my true smile back, I know what I have been missing all along. 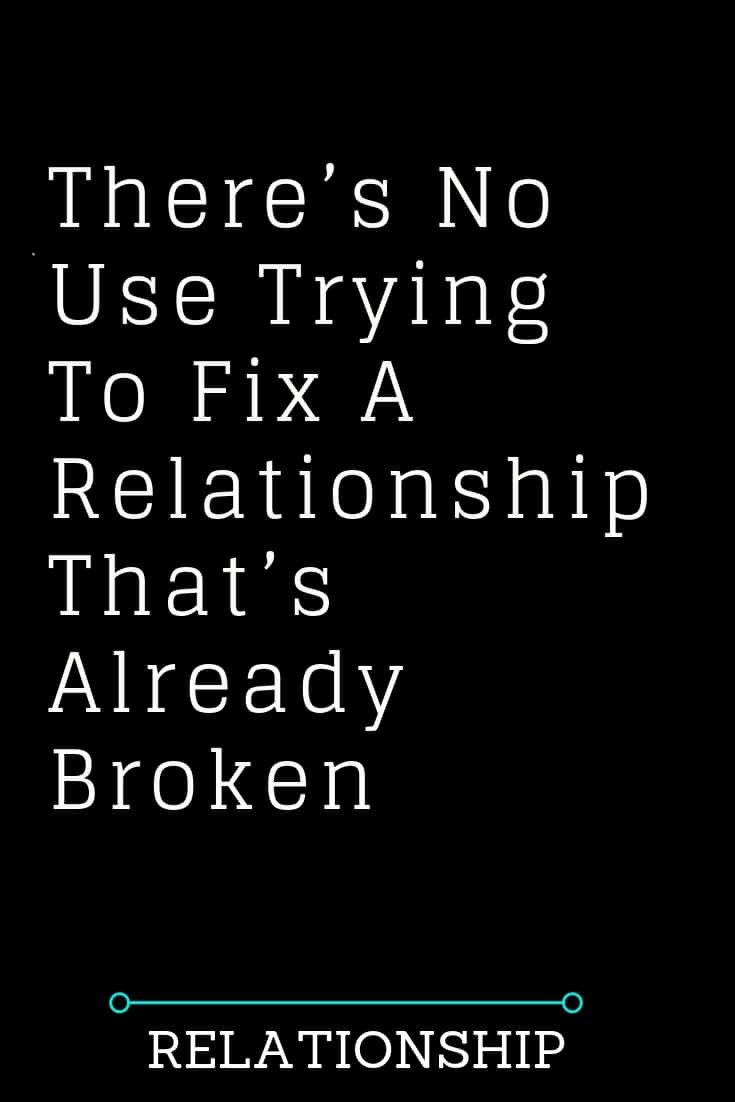 Freeing Yourself From Emotional Abuse

If He Does These 11 Things, You Are No Longer His Priority