When purchasing a new magazine or flipping through the pages of a newspaper, even the most closed-minded skeptic will always turn back to the section which contains this weeks horoscopes and scan until they find theirs. Everyone, even those who do not believe in Astrology knows their horoscope. And the majority of the modern day population has taken the Myers-Briggs®personality test (either by choice or as a mandatory event through either school or work).

Though a lot of people voice their critique of these typing techniques, many still take them as the gospel truth. So what is the truth? In this article, we will break down the history and influence of both in order to put them both to the test.

The system of using a map of the stars at the time of one’s birth is a tradition that has its roots in nearly every culture throughout history and can be dated back to the 3rd Millennium BC.

Though it is difficult to pin down exactly who created Astrology, most scholars believe that it evolved as a type of calendar or attempt to understand and communicate with the sky in early Mesopotamian society. It is important to note that Astrology was actually a serious scientific way of thought until it became regarded as pseudo-science in the 17th century, thanks to vast improvements of societies understandings of the universe. The modern horoscope-type Astrology we know today came about thanks to their inclusion in early 20th century newspapers.

7 Origins Of The MBTI®

The Myers-Briggs® personality test, which is often considered the more scientific and factual way to type one’s’ personality, came about in the early 20th century. It was created by a mother and daughter duo and was based on the psychological idea (first proposed by Carl Jung) that humans have four primary motivators that dictate their personality: sensation, intuition, feeling, and thinking.

The two combined these four motivators and ended up creating the theory that each and every human being falls into one of the 16 possible combinations of the original four. The MBTI® was originally published as a way to help women fit into the workplace during the second world war and later became popularized as the more scientific way to determine one’s personality.

Though many people enjoy sorting fictional characters by their Myers-Briggs® type, the types themselves are rarely mentioned in popular culture and have rather spread through the Internet and social mediums by people sharing the tests and talking about the types of fictional characters as well as public figures.

Astrology, on the other hand, has existed at the forefront of popular culture for nearly a century. However, as criticism of the medium gained popularity, the mention of Astrology and horoscopes are usually used to show that a character is eccentric or dim-witted. For example, one of the first things we learn about Penny from The Big Bang Theory is her Astrological type, which brands her as a ditzy figure within the show.

5 MBTI® And The Workplace

Though horoscopes are usually seen as a punchline in modern society rather than something to be taken seriously, many employers still rely on the methods of the Myers-Briggs® typing system during the hiring process. In fact, many online applications use a personality assessment based on this typing system to identify whether or not an applicant would be a good fit for their company. And though this was the original intention for the MBTI® system, the idea that someone could be disqualified for a job for being an INFP rather than an ESTJ seems a little ridiculous.

There is no indication that one’s Myers-Briggs® type has any impact on one’s work. Imagine not getting a job because you’re a Gemini!

Astrology-based horoscopes are often labeled inaccurate indicators of personality due to the fact that the majority of the predictions are so loosely worded that they could apply to anyone, and their success could be the sole result of confirmation bias. And though MBTI® seems to be the more scientifically sourced typing system, it is often critiqued in similar ways.

Though the testing is based on one’s answers to a rigorous test rather than the stars alignment during one’s birth, many critics believe that the staggering issues with reliability, validity, and objectivity within the test makes it an unreliable personality analyzer (in the scientific sense) and that confirmation bias, once again, is responsible for its success.

3 What Do They Say About Us?

So what does this all mean in regards to their assessment of our personality? Are they a valid way of typing people? Or, perhaps they’re just another fun label we can put on ourselves, like our Hogwarts house or Divergent style faction that says a bit about the general idea of our personality but should not be taken too seriously as a way of categorizing people.

Essentially, the lack of scientific validity leads us to believe that these typing systems should not be used in an official sort of way (i.e. companies should abandon all MBTI® related items in their hiring process as there is no evidence that one’s MBTI® type correlates to positive or negative performance), but there is nothing wrong with enjoying or believing in these sorts of things on a personal level.

In other words, they are nothing but harmless fun and shouldn’t be taken too seriously by fans nor critics. Let people like what they like and if they believe in Astrology or their MBTI® type, then there is literally no harm in letting them do so.

Yes, it is important to consider all perspectives and critiques but there is no reason to let a lack of credibility affect one’s personal enjoyment of a thing. If it makes you happy then have at it and do not let anyone tell you otherwise. And if you do not believe in such things, don’t go around raining on other people’s parades. People are allowed to like things and not everything has to be revolutionary in order to exist/be valid.

One way of typing that is getting a lot of praise in recent years in the Enneagram test. This typing system is based on one’s reaction to trauma and the things that each individual needs in order to feel secure in themselves/their role in life. Though it is not necessarily a personality type indicator as it focuses more on one’s values than personality, these values do shape us.

Though it is not accepted as overtly scientific or definitive in its findings, it has been accepted by the masses as being the more accurate and in depth of the typing systems. But in the end, all typing systems are just good fun and should never be used to determine one’s employability. 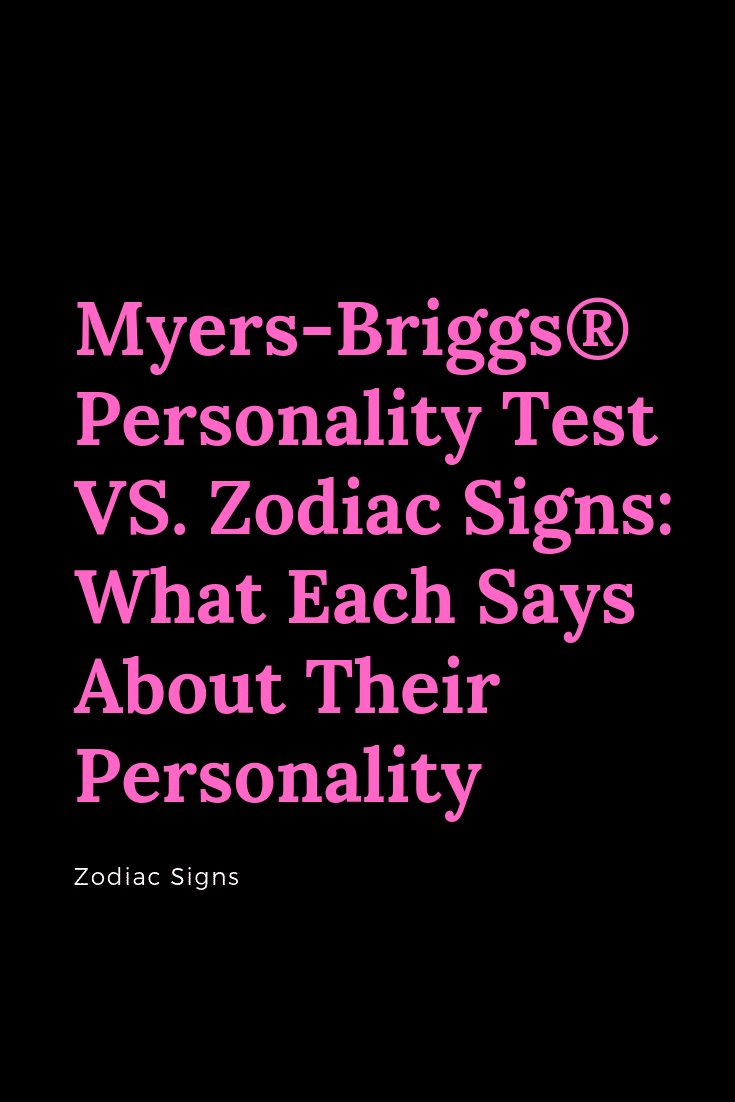 Here’s What’s Actually Pushing Him Away, According To Zodiac Signs

How To Figure Out If He’s Desperate, Or In Love, Based On Zodiac Signs