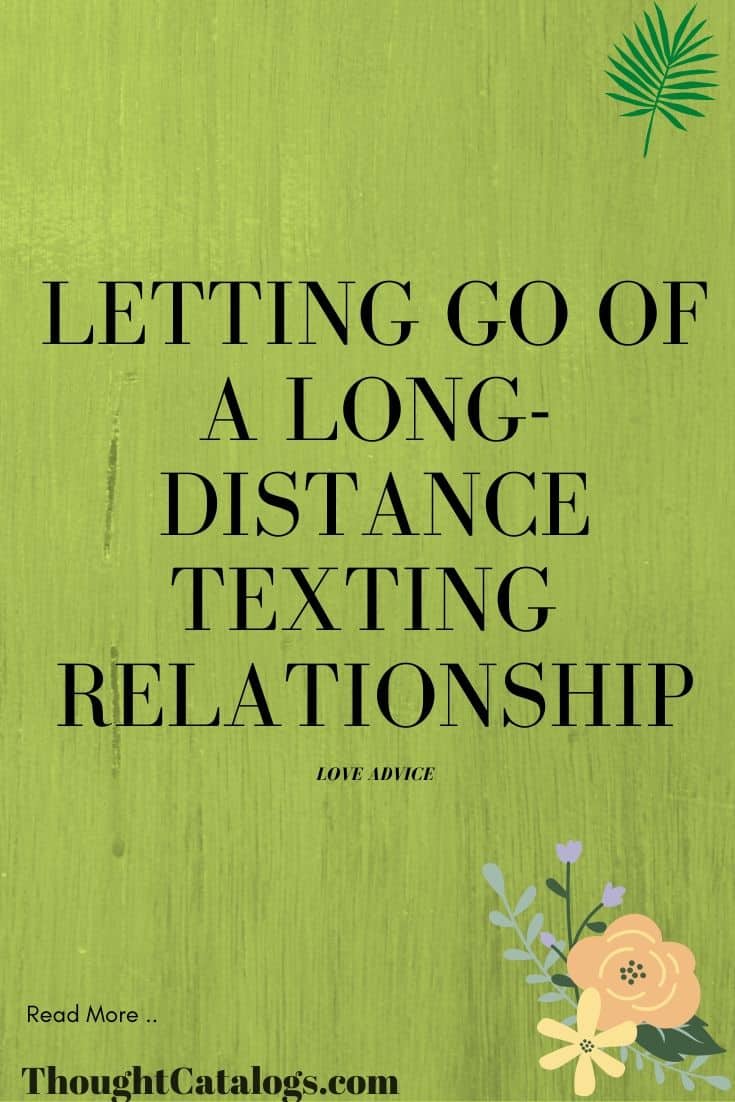 I met a man on Bumble about two years ago. We hit it off and had the most intense chemistry I’d ever felt in my entire life, but the universe seemed to want us to go our separate ways. Shortly after we met, I went traveling, and he graduated from school and moved back home. We were now at a distance.

He and I continued talking for over a year and a half, only via text message. We talked about everything — our pasts, our sexual experiences, love, relationships, goals, dreams, hopes, and aspirations. We sent pictures to one another and wished each other happy holidays and happy birthdays. We fought and made up. We gave each other advice. There was a lot of passion there. It was almost like we were in a real relationship in some ways, but it was never made official, and we never again met in person or made plans to do so.

I asked him to be my boyfriend once, but he said the long-distance relationship wasn’t his cup of tea. He told me he didn’t think anything real could come of it and that they never worked out. I told him we basically already were in one, which he admitted was true to some extent.

Trust me, I know how crazy and nonsensical this all sounds. When I told people about the connection, they would question it, particularly people from older generations who would shake their heads and sigh, “Oh, you Millennials.”

I never thought I’d be the type to get involved in something like this, but the initial connection was powerful enough that it caused me to lose all my wits about me. During the time that we were connected, I was going through a period of instability and healing in my life during which I wasn’t totally emotionally available to be in a real relationship. Talking to him was the closest thing I had to one. We were both lonely and felt like we could tell each other anything without judgment, which was exactly what we both needed at the time.

I once offered to move and he would tell me not to do that for him. It was just as I suspected — he wasn’t ready, and he was seeing other people.

During the course of our time talking, he entered into a real relationship. Of course, I tried to stop talking to him, but every time I tried to let him go, he seemed to come back into my life. I’d block him on Messenger and he’d hit me up on WhatsApp, like a whack-a-mole. I didn’t particularly want him in my life anymore, but he kept coming back. He would tell me about all the problems he and his girlfriend were having and how I was the only person he felt he could share certain things with.

I would continually block him or tell him to stop talking to me, but my intuition kept telling me to let him back in one more time, only to lead to more disappointment. It was only when he told me he might be moving near me that I seemed to snap out of this spell I had been under. Was this a person I really wanted to be with in real life? Someone so deceitful, who kept me at such a distance for so long? Not particularly. It hadn’t been feeling good talking to him for quite a while up until that point, and this was the turning point that made me come back to reality that I needed to meet someone more realistic.

I finally decided to stop talking to him once and for all. I was done with all the nonsense. I was starting to feel more stable in my life. It’s 2020. Time to move forward and move onto someone who knows a good thing when they see it.

The Reason People Respect You In 2020 (In One Word), According To Your Zodiac Sign