Facebook Twitter LinkedIn Tumblr Pinterest Reddit VKontakte Odnoklassniki
She didn’t see it because she wanted him to be her soulmate. She needed to find the love of her life so badly that she convinced herself he was the one she had been waiting for. That love she had for him seemed so right. It never even crossed her mind that maybe this time she was wrong, that maybe it was just infatuation and not true love. His smile would disarm her every time she looked at him. The tone of his voice made her heart melt. She felt like a schoolgirl hopelessly in love with a boy. She rushed to love him and she never thought twice about it. At that time it just felt right. It was a romance with a definite happily ever after, just like in the movies.   She refused to think about what would happen in a year or two. She discarded the thought of the future like it was never going to come. She lived in the moment, the moment that played her like a fool. He meant the world to her and she made him the center of her universe. He was the reason why everything seemed so easy. He was the reason why the sun shone brighter and the birds sang louder. He was the reason for the twinkling in her eyes and never-ending smile on her face.   He was the reason she loved her life. And she thought, ‘Gosh, he really is my soulmate’. They both knew what they wanted. They wanted to be together. Forever. And they decided to give it a shot. And to this day she doesn’t know quite what happened and how it all went wrong. But for some reason, when they embraced their love and sorted out their feelings, when they decided they should be together, at that moment everything started falling apart. As their relationship moved forward, their problems started to grow as well. She knows that as you become more serious about someone, the problems get more serious. But shouldn’t it be easy to solve them? Shouldn’t a man and a woman who love each other do everything to become even better and stronger in a relationship? She knows that this must be the right way to go about it. She knows that problems can’t solve themselves but she also knows that two people in love should be able to conquer everything.   At some point, their relationship became too much to handle. What looked easy before became impossible. The sun didn’t shine as bright anymore. He didn’t have the courage to love. And what hurt her the most was the way he walked away. Like she meant nothing to him, like all they’d ever been was two strangers passing each other on the street. He was so scared to keep going. He was scared to try a bit harder so he vanished from her life, running for his life like he was running from his worst nightmare. He never even explained why he wanted to go. He never even talked about it. And after all that time they’d been together, he had the audacity to leave and walk past her like she never meant anything at all to him. Her happily ever after became a happily never ever. He left her. He was gone for good. She spent so many days blaming herself for being so stupid to think he was the love of her life. She blamed herself for letting him crush her heart into millions of pieces. She blamed herself for believing he was her soulmate. A soulmate would never do something like that to you. A soulmate would fight for you because his life wouldn’t be the same without you in it. A soulmate would be next to you in the hardest moments of your life.   A soulmate is not scared to truly love. And that means to love when you’re at your worst. He wasn’t her soulmate but she loved him anyway. She opened her heart to him and she trusted him. She gave everything she had to make them work. She honestly and truly believed in him. She stood by his side whenever he needed her. But that was not enough for him. If she had known that love hurt so much she would never have fallen and let herself love someone. If she had known that someone she loved so much could betray her in such a cold and heartless way, she would have never let him close to her heart. She hates herself for letting him break her. She hates him for trying to break her. It’s true, he broke her heart, he broke her trust in people, but she’s still here. She’s still standing on her own two feet and she will never stop looking for the love she deserves. No one can prove to her that soulmates don’t exist. They do, it’s just that she wasn’t lucky enough to find one yet. 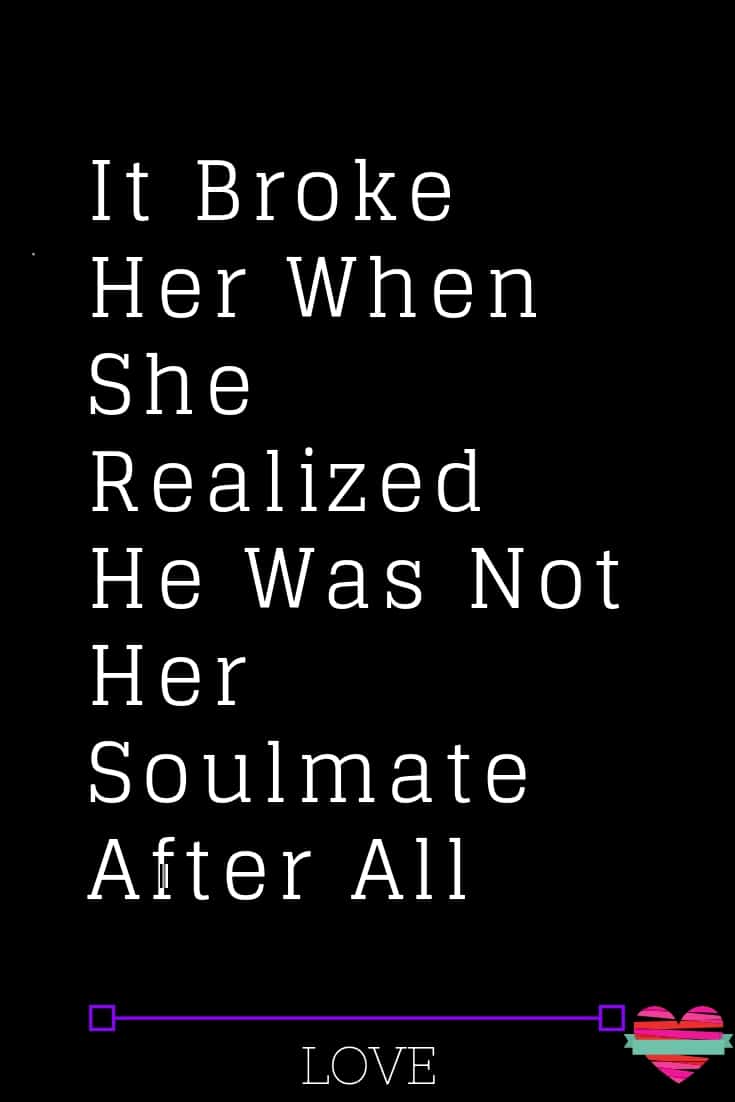