In the age of modern dating, when nothing is sacred anymore, you will, unfortunately, be able to see all kinds of guys.

There will be so many fuckboys, sociopaths, and psychopaths but one species is quite popular nowadays—they are called emotional sadists.

If you have been lucky enough not to date a man like this, I just want to tell you that they are extremely dangerous and if you ever see a sign that reminds you of a man like him, you should run as fast as you can.

A man like this doesn’t look any different from the good guys. In fact, when you see him at first you would swear that he is just a good guy and that he can’t do you any harm.

But you are far from the truth because a man like this is just a manipulative asshole in disguise, trying to catch the perfect victim to make a perfect crime.

In this case, he uses all kinds of different techniques to manipulate, gaslight or belittle his victim and in doing so, take full control over her.

Here are some of the most common signs of an emotional sadist, so read further and learn how to defend yourself from a man like this.

1. He continues to hurt you even if you tell him to stop

One of the most important signs that you are dating an emotional sadist is that he doesn’t listen to what you have to say. So if you tell him that a certain behavior of his makes you feel uncomfortable and he still continues to do it, it is a sign of disrespect and a lack of love.

It is obvious that a guy like this doesn’t love you enough to change himself to make you happy. He will always use his sick mind games to control you and to make you feel bad about yourself.

2. He cares about you only when you are gone

Have you ever had a situation where someone took you for granted all the time while you were in a relationship with him and the only time he truly showed some love and respect was when you actually walked away?

If this rings any bells it means that you were dating an emotional sadist who only cared about you once he would see that you were going to leave him. That would mean that he wouldn’t have anybody to control anymore and he would be angry because of that.

3. He flirts with other women

A guy like this is not ashamed to hit on every hot girl who goes near him, no matter whether you are there or not. If he truly respects you, he wouldn’t do that but since he is not that interested in you as a person (except for free sex and your help with everyday life) he will do it without feeling remorse.

What you need to know is that you deserve so much more than he can give you and it would be smart to leave him. Only in that way will you be able to find someone who truly deserves you.

4. He makes you feel that you are not good enough for him

If you constantly feel that you are not good enough for him, even if your self-esteem is at a high level, it means that you are dealing with an emotional sadist who will do everything to make you cry and doubt your common sense.

He is the type of man who will convince you that you are the crazy one and who will treat you like shit even if you don’t deserve that. He will make you feel like you are the unlovable one and he will never admit that he is the one with the problem and not you.

5. He acts well toward you only when he needs something

A guy like this knows how to play all sorts of mind games very well.

He is ready to go the extra mile for you if that would mean that he would get something in return. So when you see him all sweet and nice, don’t hope that he just woke up and started loving you madly.

Chances are he needs your help for something and as soon he gets what he wants he will leave you like he is leaving nothing.

6. You feel that he doesn’t love you

Only an emotional sadist would be with someone who he doesn’t love to get what he wants. You see, everyday hurting you, abusing you, is what makes him feel good in his own skin so he will pretend that he loves you just to be close to you.

I just hope that you will leave him as soon as you see that love is not what he feels.

7. He has shitty excuses for his bad behavior

You see, when you are in a romantic relationship with someone, you won’t hurt that person deliberately. And if you hurt them, you will say that you are sorry and make up for your sins. But an emotional sadist is someone who never says that he is sorry and he always tries to find shitty excuses for his nasty behavior.

A man like this will never do anything that will make you feel better and he will leave you in tears every time you two fight. The thing is that he is not interested in making you feel better or helping you in any way. 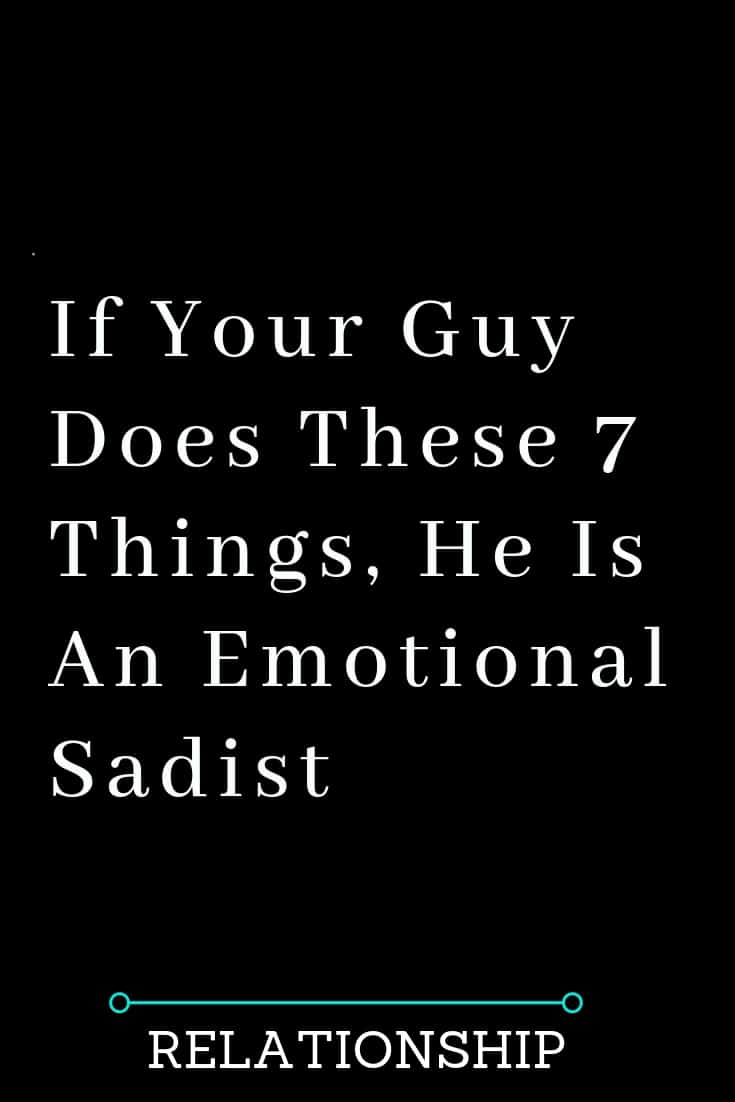 16 Effective Ways To Know If Your Ex Is Over You