It’s just like any other day and you’re walking down the street when BOOM!You run into your ex with his new girlfriend. You thought you’d gotten over him when suddenly you get that overwhelming feeling of disappointment.

You start contemplating: Why did he move on so quickly? Did I mean so little to him that he got over me so quickly? Or you’re scrolling the newsfeed and you suddenly stop in disbelief when you see him happy with another woman.

You feel betrayed even though you’re no longer together or you were the one who initiated the break-up in the first place. Perhaps you think he didn’t love you that much or that she is the reason why the two of you parted.

Before it gets beyond complicated, try to understand that him moving on too quickly, in most cases, has nothing to do with you. If you overthink, you’ll make it even worse than it is.

Breathe and concentrate on the present. If you mix the past with the present, the mixture of feelings you get will eventually suffocate you.

Moving on too quickly doesn’t mean he’s forgotten you.

Perhaps he decided to move on just to find some kind of entertainment for himself in order to stop thinking about you.

It’s just his way of coping with it because some people are afraid of being alone after a break-up. In a relationship, people create their own routine and now it’s hard for him to continue on his own (especially if you were together for a long time).

Moving on too quickly can be an act of his ego boosting.

We all know that men are competitive and sensitive when it comes to their confidence. They enjoy pursuing you just to feel so much worthier in the end when they ‘get you’.

It’s pretty much the same with break-ups as well. No matter what the reason for your break-up, he will find himself feeling insulted.

To be exact, his ego will find itself insulted. He will feel like he has failed to be a real man because he couldn’t make you happy.

If he cannot make a woman happy, it’s a direct attack on his confidence and a man’s most important thing in possession—his ego. Now, if he succeeds to seduce another woman, it means he’s still worthy of being a man and his skills still work like a charm.

So, if you find him all of a sudden with another woman, it may be an act of his ego boosting. There’s nothing you can do about it. You have to accept that it is in their twisted nature.

Moving on too quickly in order to make you jealous?

Perhaps you’re the one who moved on too quickly and he’s just telling you that he’s able to do the same.

Well, perhaps he’s just testing whether or not you’re going to call him and say that you miss him or he’s subconsciously trying to make you feel like shit for no apparent reason. Whatever the reason may be, don’t let him manipulate you.

If he really wants you back and misses you, he will make sure to find a decent way to show it. 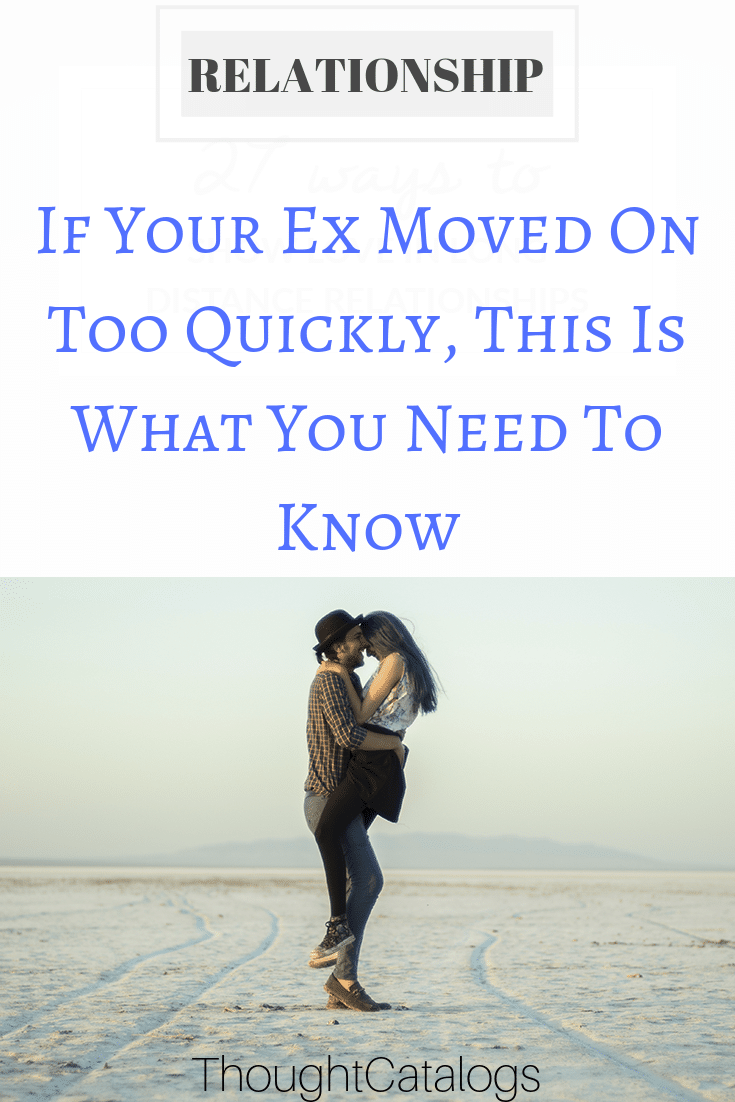 This Is Why She’ll Never Go Back To You

This Is How I Accepted We Were Done