Never, not in my wildest dreams, did I imagine something like this would to happen to me. Now, that some time has passed, I’m ready to open up and to talk about it, although I still haven’t made peace with it—I probably won’t, ever.

I know why I won’t ever let this go. Because I didn’t get any answers. The only thing that I got from you is doors slapping in my face and the words: “Get out!” With no explanation—nothing. How can a person deal with something she still can’t comprehend?

We’ve been together for 5 years. We lived together and of course, we had plans for the future. People judged us a lot—I mean, they judged me because you were 15 years older than me. But I didn’t have a problem with that. I fell in love with you and not your age. I loved the fact you are mature because I’m an old soul—so we got along just perfectly.

The last 6 months were rough. We had so many bumps on the road, but then again, who doesn’t. Name one relationship that is perfect—there isn’t one. We all fight and we do it because we care for each other and we express our emotions that way—a few harmless fights can only do well to a relationship. They can’t destroy it—much worse things have to happen for the relationship to die. For example, this what happened to us—what you did to me.

I wasn’t around as much as I should have been and that also contributed to our relationship fallout—but it doesn’t justify it. If you loved me truly, my absence wouldn’t matter. You decided to hurt me and nothing would have stopped you from doing that.

Before you’ broke my heart, I already had a feeling something is about to happen. I came home (a place that I used to call home) and you confronted me—coldly and strictly. You’ve looked at me like I never meant anything to you and you mercilessly said: “I don’t love you anymore. I want you to move out today because I’m not comfortable with you being in my apartment.”

I stood there in the state of complete shock. Where is this coming from? My apartment? Isn’t that our home? Who gave it a title ‘my apartment’? So many questions were running inside my mind but I couldn’t ask any of them. I wanted to say something but I was paralyzed. I was looking at my life falling apart and I couldn’t do anything about it—not even to find out why.

I took some of my stuff and I went to my friend’s house—defeated and alone. I lived there for a few days and then I decided I will go back at my mom’s house because I was just finishing college and I didn’t work anywhere.

I didn’t have anywhere to go. She even told me she will pick me up and help me with my stuff—after 5 years of living with someone there is a lot of stuff to move out. I called you and I asked you if I could spend the last night in the apartment because my mom was coming early in the morning to pick up me and my stuff.

You hesitated like those 5 years we’ve spent together meant nothing to you. After I practically begged you to stay just one night, you agreed. I slept on the couch that night—actually I didn’t sleep at all. But when I got up in the morning, you were gone. I guess you didn’t have the stomach to watch me pack and leave.

After I left, I couldn’t sleep and I couldn’t eat. I was obsessing with why you did that to me out of the blue. I knew you had someone else—I mean, it was obvious. But why didn’t you have the courage to say it in my face? Why did you have to stab me in the back?

You didn’t have the courage to face me—you were too much of a coward to come clean with me.

Of course, a week has gone by and I got the news that clarified everything. Not only that you were cheating on me, but you were getting married. Thank you God, thank you life, thank YOU for stabbing me in the back after I gave you 5 years of my life.

All I asked from you was a little bit of respect. All I wanted was a dignified breakup—an explanation. I’m not a dog on the street. I’m a human being—I feel stuff as you do. In that way, we are the same.

You could have given me that—instead you gave me pain. You stabbed me in the back. 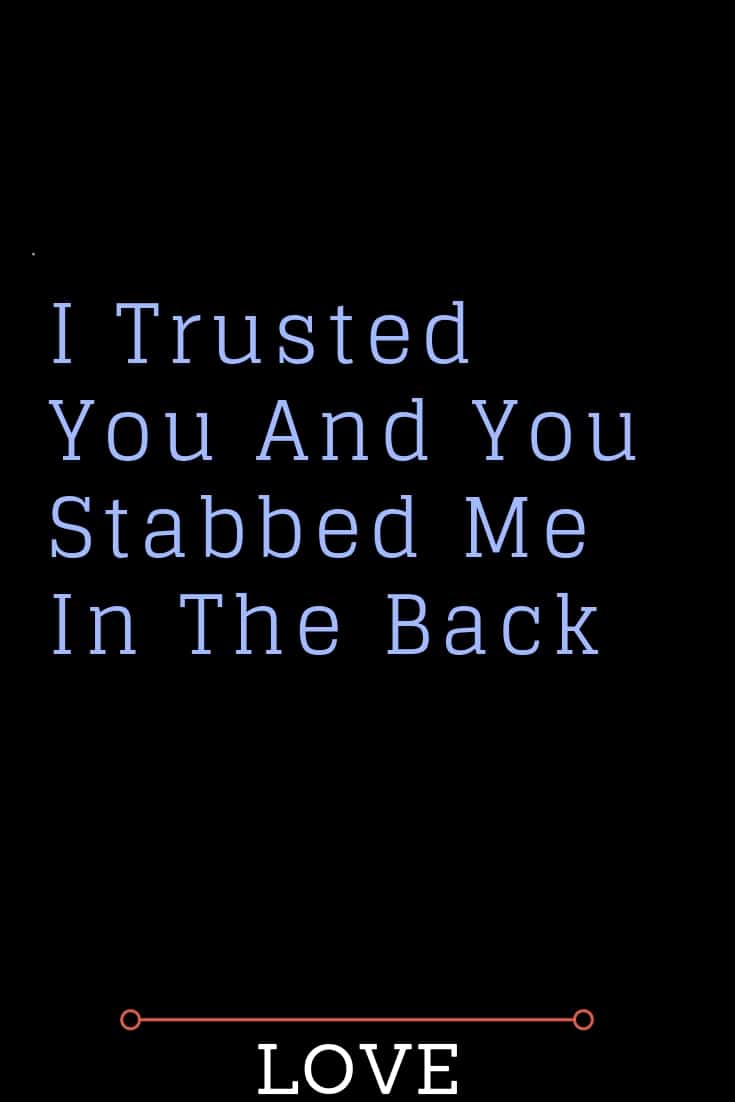 These 3 Zodiacs Who Absolutely Hate Catching Feelings In February & March 2023, Based On Zodiac Sign
1 hour ago

These Zodiac Signs Ranked From Most Psychic To Totally Clueless in 2023, Based On Zodiac Sign
1 hour ago