I address this letter to the guy who can’t take ‘no’ for an answer, but it can be applied to any other guy who keeps on hitting on a girl, even after she stated clearly she doesn’t want to have anything to do with him.

So, dear boy who has probably never accepted ‘no’ for an answer in his life, I have a question for you: How self-centered do you need to be to think you can have any girl you want? Who told you that you’re that good and at what point did it occur to you that there isn’t a girl in this world who wouldn’t fall for you?

Guess it hurt you pretty hard when I stayed firm with my ‘no’, when I said I didn’t want to have a drink with you and when I said ‘no’ to going out with you. That’s when you decided to call me names. That’s why you decided to call me a prude and then change your story after a while and say I was just playing hard to get but that I was actually the easiest girl to get in this world. Well, let me tell you something: Even if I was the easiest girl in this world, I still wouldn’t be with you.

What strikes me the most is the fact that you know your story of being a fuckboy is well-known and that you’re proud of it. Why? How could you even think that being mean to women, gaslighting them or treating them like less would ever attract me to you? How could you think I would fall for your sexist pick-up lines? And throwing dirt on my name after you got rejected just confirmed that my decision was more than right.

Let me tell you something: A woman gave birth to you so try to think or imagine how you would feel if someone treated your mother the way you treat other girls. How would you feel to know she’s crying herself to sleep because someone humiliated her or used her? You’d feel pretty bad, wouldn’t you? I know I’d feel like the biggest coward and biggest piece of dirt in this world if I knew I had made a human being cry.

The ugly truth is that there are plenty of guys out there like you. And people let them get away with it. Well, I won’t be one of those people. Your biggest mistake was thinking that I would just comply. Thank God someone like you showed what you call interest in me. I was just offended by the idea that I could wake any interest in you. Dangerous Words And Phrases That Kill A Man’s Attraction For You

I don’t want you to want me and I don’t need you to notice me. Because it doesn’t flatter me, it just makes me feel dumb and easy.

I’m not a prude, I don’t avoid intimacy or anything like that, but what I do want to avoid is a guy like you.

You go around chasing skirts and airheaded girls so that you are able to brag about how many of them you’ve been with. I don’t want to be another number on your list.

You treat all girls like less and you only show interest in them when you’re bored or when you need something from them. I don’t want to be treated like that.

So, I’m sorry if my ‘no’ hurt your feelings and if my ‘no’ flattened your ego and if talking bad about me will help you feel better, then go ahead. I just needed you to know why you got a ‘no’ from me. 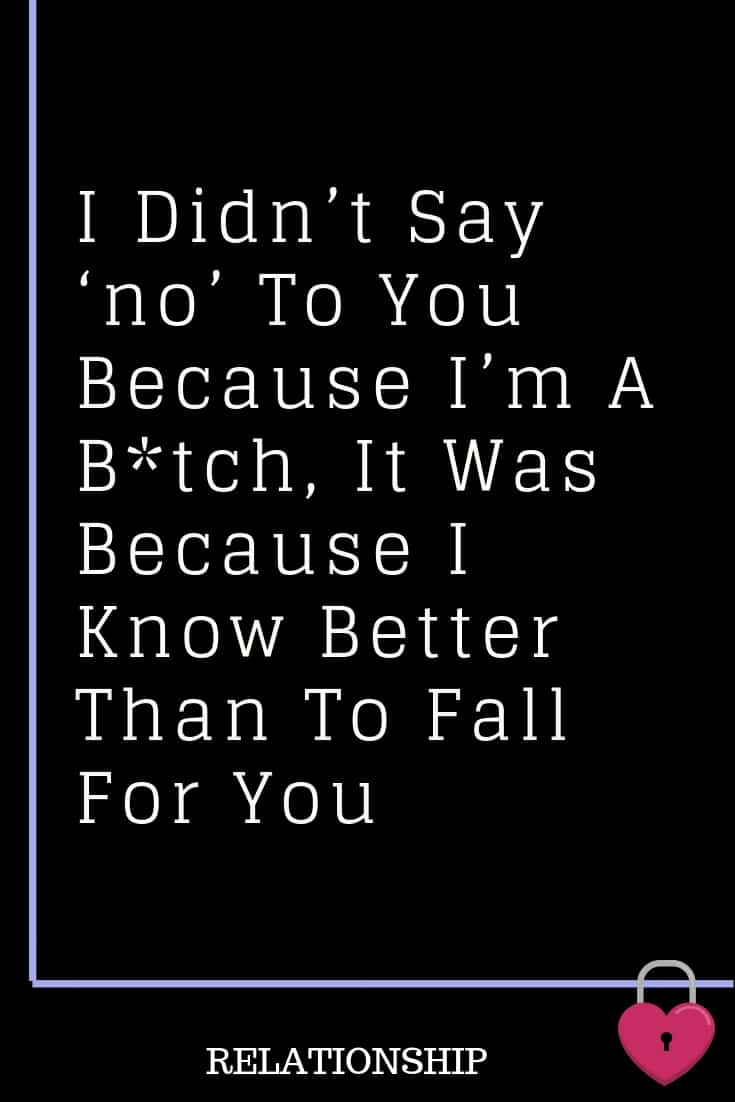