It’s not the same kind of love. It’s brutal and it’s painful.

It means loving a person who’s been in constant pain, and that pain has turned into a permanent state. A girl who’s been cheated on holds her bleeding heart in her hands, trying to protect it from evil, but it’s out there, out in the open for everyone to take advantage of.

This girl walks with the pain in her chest, a pain which never goes away. She can force it to be quiet, but it can never go away.

This is what it feels like to be her. This is how difficult it is to love her.

So, before you decide to walk into her life, think about if you’re ready to go in with all of your heart. Are you ready to teach her to love again?

Don’t think she’s afraid to love. Don’t think she locked herself up to protect herself because she has been through some serious shit. She is not a coward; she is something completely different.

She is brave; she keeps going

After that amount of pain, after that many tears spilt, she moved on. She didn’t surrender; she kept fighting. She grew stronger. She became better.

And after all of that, she still has faith. She didn’t put up every possible wall she could think of. She left space for the right person to find. She left it although she knew it will make her vulnerable. But a fighter like her is not afraid to take risks.

Just so you know what are you getting into and what she is made of.

If you want to love her, you have to be honest with her. Hold her hand and stand by her side when she needs you, but always be honest.

When you’ve got something to say, don’t hide it from her because she’ll see that you’re hiding something, and she’ll suspect you. Then it will be so much harder to get her to open up again.

Listen to her, because she has so many things to say to you. Even when you talk casually, if you pay attention, she might give you a clue, a small insight into a portion of her horrible past.

She’ll never sit you down and tell you all about it, but she’ll sneak it into the conversation, and if you don’t listen, you won’t hear it.

Getting her to trust you is not something you can expect from the beginning. Trust is earned, and you still didn’t earn yours. You have to prove yourself.

But if your intentions are pure and good, then you’ll get there. Just let time take its course and be yourself. No pretending, no masks, just you. She’ll know that you mean it. She’ll know you’re honest, that you won’t hurt her.

If you do this, she’ll show you the way to that little crack she left in her huge walls. She’ll lead you and let you in. Just show her that it’s okay. Show her that you won’t harm her. Show her that the only thing you want is to love her.

She’ll be careful. She’ll take things slowly, and you have to understand that. You have to be patient with her because she’s been let down before. She’s been cheated on and for all she knows, you’re no better than the one before.

Prove yourself to be worthy of her trust and love.

You have to remember that you’re dealing with a girl who lost her self-respect and self-love. She has zero confidence left in her.

Although she will never tell you, she craves your attention, and she seeks your approval. She needs those words of support almost every day. It’s something that helps her bring her confidence back.

Because once you’ve been cheated on, you feel rejected. You feel like you’re not good enough. And that is a feeling you can’t shake off that easily.

That is something you learn to live with, but you know that that person who is in your shoes is not you. You’ve become her, and you can’t find yourself.

Show understanding. Make her believe that you are in this for real because no matter what she tells you, there will always be that ray of doubt in the back of her mind. She’ll always wonder if you’re doing something behind her back.

If you don’t call her for a few hours she’ll immediately start imagining you with another woman. Don’t get angry. Don’t think she smothering you. She is only scared.

Understand her and love her even more because even that will stop at some point. It all depends how you treat her.

She’ll ask a lot of questions. Please answer each one of them. Don’t get irritated because she is not trying to control you. She is not some psycho girlfriend that has to have you in her sight every minute of the day.

She’s only overthinking, and that panic consumes her. She’s been through a lot and she doesn’t want to go back.

Loving a girl who’s been cheated on is a huge challenge. On the one hand, she is strong because she’s survived a lot and picked herself up. She still believes in love, but she also knows that sometimes, love is just not enough.

But on the other hand, sometimes she falls under the pressure, and she brings all of her insecurities back into the picture. She becomes frightened and sad all of a sudden. And you, if you love her, have to go through it like a man.

If you make only one wrong move, she’s out. If you hurt her in any way, she won’t give you another chance. Now, after everything she’s been through, she knows better. 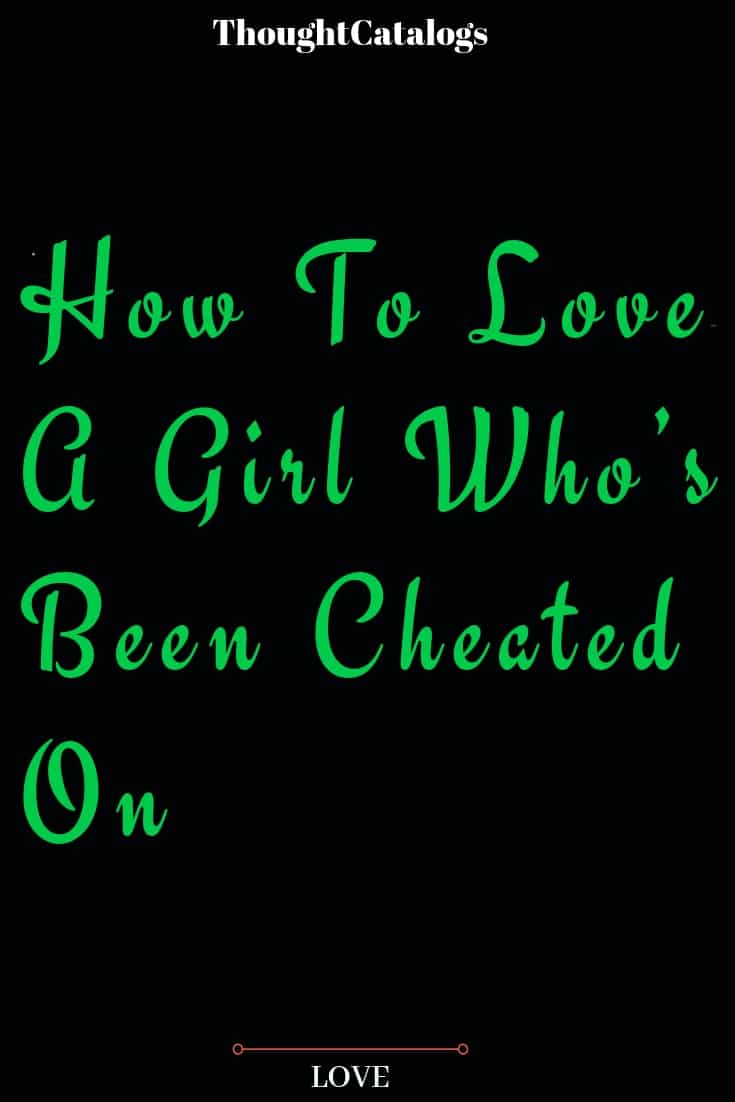