Aries is spontaneous and unpredictable. If your Aries suddenly doesn’t want to get involved in a quickie or unplanned sex, then you have all the right to doubt his fidelity.

It’s almost impossible to conclude that an Aries man doesn’t want to take advantage of a spontaneous situation.

If this starts happening more regularly, he’s definitely getting some on the side. Don’t even think twice about it!

Aries men need excitement in their lives and relationships.

If you aren’t that thrilling and ready to move, he’ll definitely leave you behind and find that excitement elsewhere. That’s the biggest reason why they cheat.

You’ll know he’s up to no good as soon as he starts trying too hard to make his stories believable.

If he begins to give you excuses for the things you aren’t even asking him to explain, then he’s hiding something – probably another woman.

Taurus men aren’t the cheating type in general but tend to throw a surprise or two, regardless of their good nature.

Taurus men are extremely loyal, but they are also extremely sensual. It can happen they get lured into an affair just because of the excitement and for the sake of experiencing something new.

To conclude, definitely a lack of loyalty from their partner is a huge factor in their cheating.

Gemini become paranoid about their phones. If they’ve been getting something on the side, just try to take their phone and their reaction will confirm your doubts.

You don’t even have to intend to snoop around their messages, just ask them as an experiment.

He won’t give it to you at first, right when you ask for it. He’ll come back to you later when he makes his phone safe to use by someone else.

Messages will be gone and the phone list will probably be empty of any evidence.

If a Gemini man cheats on you, his affair will most probably be emotional rather than physical. They are very intelligent people who crave intellectual challenges.

That’s one of the most common reasons why Gemini cheats. To avoid him cheating on you, engage more in conversation with your partner and show interest in things he likes.

Cancers are not the cheating type, but that doesn’t mean they don’t cheat at all.

Cancers are almost always emotional, which means when they aren’t emotional, they’re most likely cheating.

Because an affair is something a Cancer is quite scared of, he’ll be on edge and very nervous if he’s breaking the love law.

Showing his emotional side is not a problem, so for as long as he’s talking to you about his feelings, you don’t have to worry.

The number one reason why most people cheat is the fact they have very low self-esteem.

So they try to find validation somewhere else. Usually, they find a romantic partner and sneaking around with that person brings them a sense of value and importance.

To avoid him cheating on you, make sure he knows how much you care about him.

A Leo man is quite smart when it comes to cheating, but on the other hand, the cover of those kinds of “adventures” get blown eventually.

Nevertheless, if you’re suspicious that your Leo is having an affair, just smell him when he gets home.

No, he’s not going to have a woman’s scent all over himself, he’s not that stupid. Instead, he’s going to wear tons of cologne to cover up his infidelity.

Leo is all about excitement. If he lacks that rush in his relationship, you don’t have to think twice about whether he’ll go and look for it somewhere else.

Leos are very sexual beings, so throwing in a trick or two in the bedroom will definitely keep him intrigued and interested in dating you.

Virgo men are used to having a nice and peaceful relationship without too many distractions and emotional disturbances.

If insecurity in his relationship starts to grow, it’s more likely he’ll give up on it entirely than fight for it.

There you go, that’s the perfect excuse for starting an affair. To avoid this, try doing something nice for him. Virgo men like to be pampered.

It’s simple. A Virgo man will cheat on you because he wants more attention from you.

If you’re in a relationship with a Virgo man, you have to put twice as much effort into keeping him. They aren’t easy to handle at all.

Libra men like to have their friends and family altogether.

The only way you’ll ever suspect he’s cheating on you is if he suddenly starts hanging out with people you don’t know. That is very unlikely for a Libra man.

The catch is, he’s hanging out with other people more and the person he’s cheating on you with is probably a part of that gang.

A Libra man will never risk introducing you to people he doesn’t want you to meet, so you won’t find out something by accident.

Libras are not usually cheating types. They are very loyal and committed.

If a Libra man does stray from his fidelity journey, it’s because he’ll get carried away. Libras love to flirt and meet new people. The only way he will cheat on you if he takes flirting one step too far.

Pretty much like the Libra men, Scorpio men are also very loyal. They will cheat on you only in extreme cases.

In order to be ready, there are some signs you should consider, which can alert you if your man is up to no good.

If he suddenly changes all the passwords on his social media accounts and if he keeps his phone hidden from you, then you have something to be suspicious about.

Scorpios are misunderstood ninety percent of the time. People tend to believe they are prone to cheating, when actually, they’re the complete opposite.

The main reason why a Scorpio would cheat on you is probably you. It’s you who’s doing something wrong.

Try to change your approach and things will turn for the better.

Sagittarius man won’t beat around the bush if he doesn’t want to be with you anymore.

If he finds someone else more attractive than you, he will definitely tell you without thinking twice about it.

Maybe he won’t tell you right away what he wants, but he’ll definitely throw some indicators your way, like  asking questions about your relationship and directing the conversation to the “breakup” mode.

It’s almost impossible to take control over a Sagittarius. You’ll probably never be able to calm his passionate personality down.

He is used to wandering off and seeking new adventures. Sadly, commitment doesn’t apply here.

There is one tell that every Capricorn has if they’ve done something wrong.

Usually, they’re no strangers in buying things when the occasion calls for it. But, if your Capricorn starts buying you things out of the blue, you have a problem.

Him giving you gifts for romantic purposes is pretty shady, so don’t take it without seriously suspecting he’s cheating on you big time.

Capricorns are very traditional, so cheating is really almost never an option for them.

Unless… you don’t treat them with respect. That is the only thing that could ever trigger them to find loyalty and love elsewhere.

Aquarians are known for their honesty. So if they are having an affair, they will most definitely tell you sooner or later about it.

You don’t have to worry about them lying, at least not after a while.

On the other hand, you may detect infidelity early on according to how your Aquarius man acts around you.

If he excessively mentions one person in a bad manner, you should turn on your “affair detection radars” because there’s definitely something fishy going on in his life.

Usually, Aquarians are not into cheating.

It’s more likely that they’ve neglected their partner because they get caught up in their intellectual new ideas, so they completely ignore the person they’re with.

Although this is usually the case, sometimes Aquarians are the ones to blame for cheating simply because they are unpredictable.

Pisces men are usually in their own dreamy world. They don’t care that much about their looks or how other people see them.

You must have noticed that on your man and his behavior.

But there is another side to them when they start acting like they’ve done something wrong (and they did). Your usually “messy” man will start grooming himself all of a sudden.

Nothing would be suspicious if he just started to care a bit more about the way he looks, but giving himself a complete makeover all of a sudden is shady as hell.

Pisces men want magic in their lives. They don’t want anything ordinary, only things that are dreamy and special. It’s hard to stand by such personalities and not go crazy.

But, one thing’s for sure – if you don’t want him to cheat on you, give him a bit more attention and love. 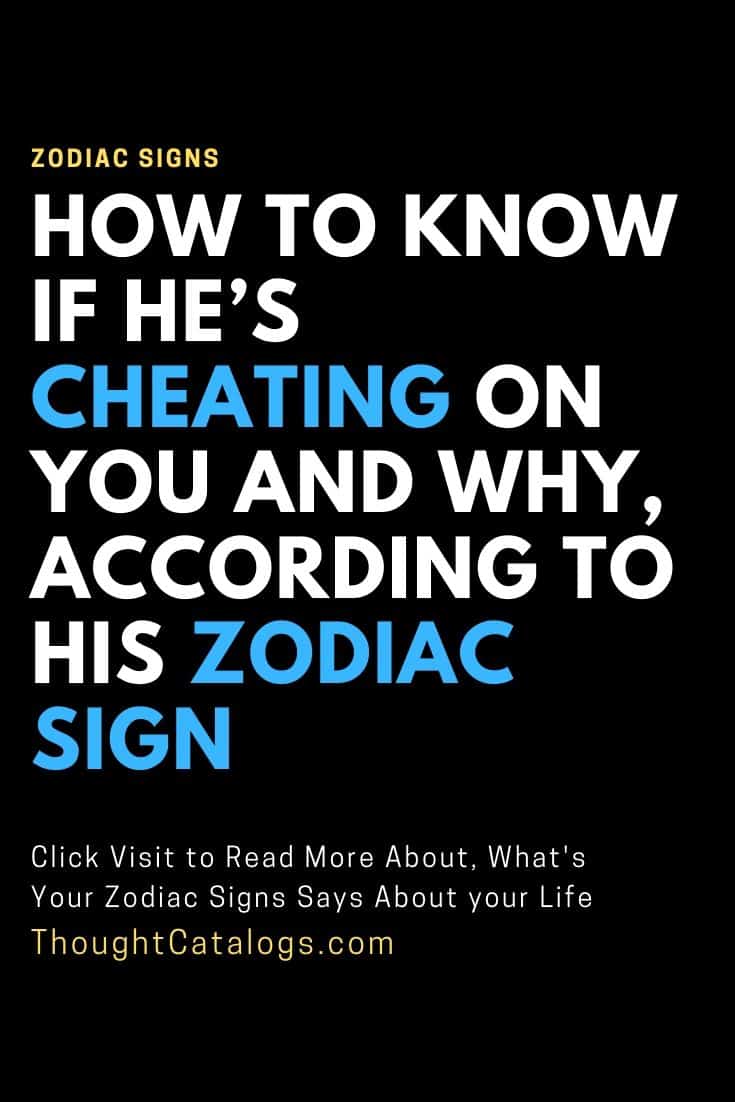