Getting cheated on is one of the most painful and humiliating things any woman can experience in a relationship.

Your heart is shattered, your ego is broken, and your dignity is harmed.

However, despite knowing all of this, there are many women who take back their cheating exes. Why is that so?

Well, the truth is that most cheaters are also quite skillful manipulators.

They use different strategies and techniques to lure their victims back to them, and here are 4 of the most common ones.

At first, when you find out that your partner has been unfaithful, he will do his best to deny his affair, and he’ll never admit his wrongdoings if he thinks he has a chance of getting away with them.

He might even try to convince you that you’re crazy for suspecting him and try to make you feel guilty for not believing him.

Beware that by doing this, he is actually using reverse psychology.

He wants to take all the blame off himself and make you look like a bad guy, even though you both know you did nothing wrong.

Even if you catch him red-handed and even if you have all the evidence which proves his infidelity, he’ll still deny that he is guilty. In fact, he’ll probably tell you that things aren’t as they seem.

Of course, no woman in her right mind would buy his crap.

However, sadly, many girls fall for these empty excuses and deceptions simply because they want to believe their partners.

They want to preserve their relationship at all costs, and it is easier for them to lie to themselves then to face the brutal truth.

2. Present it as irrelevant

Nevertheless, when a cheater doesn’t have anywhere to go and when he sees that you are not believing in his lies, he will have to admit his infidelity.

However, even when he does this, he’ll try his best to present it as something unimportant, something that never mattered in the first place.

He’ll probably tell you that this was nothing but a moment of weakness and that it is not something that should have any effect on your relationship whatsoever.

According to him, this is not worthy of destroying what you guys have been building for years and definitely not something you should put so much attention on.

The reason this strategy works in many cases lies in the fact that most girls enjoy hearing these words from their cheating ex.

They want to believe him when he says that all other girls in his life are just temporary and that they’re the only ones who matter.

Another technique your cheating ex will probably use in his attempts to get back together with you is trying to put all the blame on you for his actions.

He’ll probably accuse you of not giving him enough attention or for killing the flame and the passion in your relationship, which made him look for comfort somewhere else.

He wants to completely turn the tables and present you as the one who should be apologizing for the fact that he deliberately and consciously chose to hurt you. This is something you shouldn’t allow at all costs.

Even if your relationship had its problems, it cannot be an excuse for infidelity.

After all, he had the possibility of leaving you if he saw that you guys aren’t functioning together which is always a better option than betraying you in this way.

So instead of allowing him to convince you that you’re guilty, be aware of one fact: this guy is not only a cheater, he is also a toxic manipulator who doesn’t know how to take responsibility for his actions.

4. Promise you the world

The last but definitely not the least dangerous strategy your cheating ex will without doubt use to convince you to take him back is giving you false promises.

He’ll tell you that he is ready to do whatever it takes for another chance, that this was a mistake he doesn’t plan on repeating, and that he’ll be the best possible boyfriend in the future, if you just give him the opportunity to repent.

However, he is probably just looking for a green light to keep on hurting you.

Of course, it is up to you whether you’ll forgive a cheater and take him back, but I’m just begging you to take into consideration the fact that most cheaters continue with their misdeeds even after endless second chances.

He is probably not sorry for cheating on you–he is only sorry that he got caught.

Also, people rarely change, and your ex is not likely to be an exception.

If you forgive him this time, he’ll probably keep on cheating on you because he’ll see your forgiveness as a sign of approval. 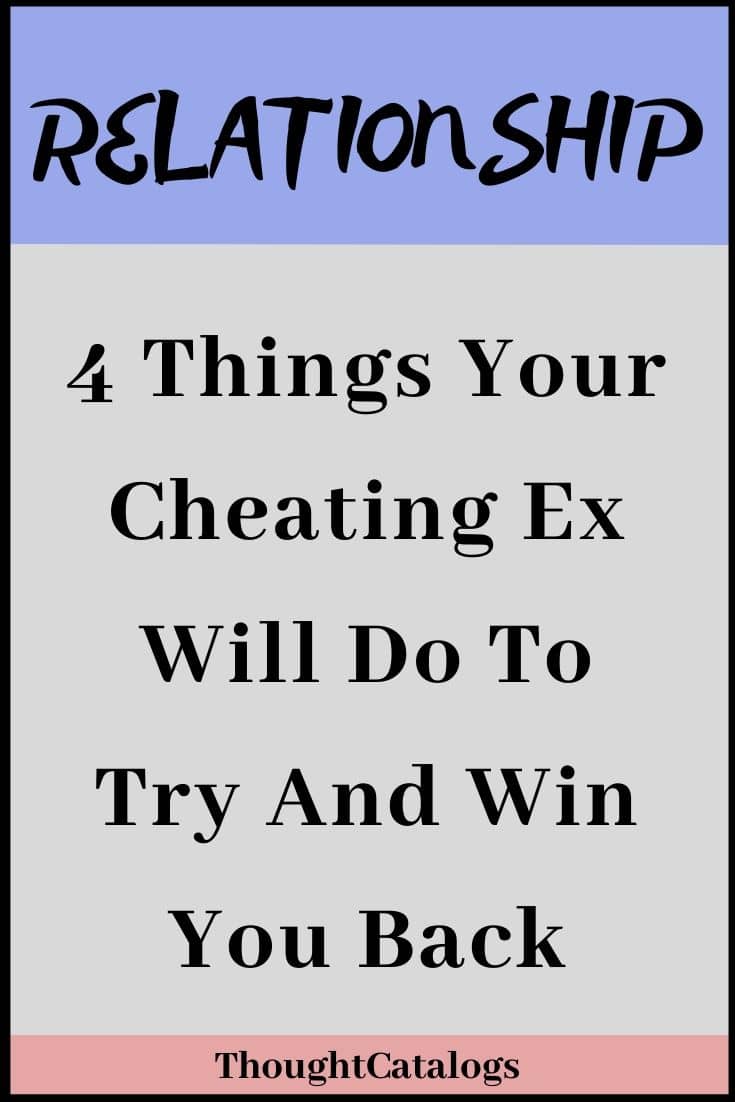