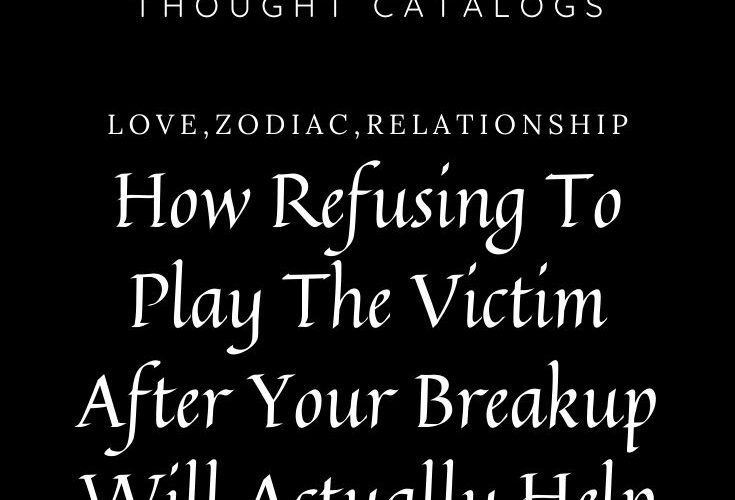 Be honest: Are you playing the victim after your breakup?

Sure, your person has left you and you are alone, devastated, and that is a truly horrible thing. And perhaps you are convinced that your person is a horrible person to just walk out on you, even though nothing was wrong. Perhaps you are telling yourself that you are the victim in all of this.

Now, I am not saying that you haven’t been blindsided and hurt deeply—this is how it is at the end of a relationship. But I would argue that perhaps what you are telling yourself isn’t in fact true, and that if you continue to play the victim in your breakup, if you continue to take no responsibility for its demise, then it will take much longer to heal.

Let me explain why.

1. You will retain your power

When my ex decided he didn’t want to be married to me anymore, I was devastated. I couldn’t believe that my marriage of 18 years was over. And, believe me, the instinct to curl up in a ball and give up was strong. And to be honest, I did for a while.

These things she taught me were the best things I ever learned. More than anything, I wanted to just give up. Instead, I took a good look at what I wanted my life to look like and how to get it and I set out to do just that.

I found a therapist and a lawyer, and with their help, I defined who I was and what I wanted the rest of my life to look like. Instead of waiting for my ex to file for divorce, I did it. I stood up for myself during our divorce negotiations and got what I needed to move forward and be safe. I spent many hours talking to my kids about what was going on so that they could understand and move forward as well.

By doing all of those things, by not lying down and letting my ex run roughshod over me, by not feeling sorry for myself that I was being abandoned, by not blaming him for everything and understanding my own part in the divorce, I was able to retain my power and get what I needed to move forward and be happy.

2. You will be able to make change.

When I worked with my therapist around what had happened in my marriage, I learned a lot about myself and my role in its demise.

Right after my husband left me, I spent a lot of time angry at him for walking away without making an effort to fix our marriage. We had a family and history and had made vows, and he had just walked away.

With time, however, I was able to see that while I didn’t walk away from our marriage, I did play a role in its demise.

I knew that I had been unhappy for a long time and hadn’t expressed that unhappiness in a productive way. I had merely sulked and gone silent, hoping for change that would never come because of the lack of communication between us. I never talked to my husband about what I was feeling, instead only complaining to my friends. I took for granted that he would always be with me, no matter how I treated him.

None of these things were okay.

My ex, of course, bore half of the blame for the demise of our marriage, but playing the victim and waiting in vain for him to take responsibility for his part was only causing me to be angrier. And then I realized I can’t change him, but I can change myself.

So, I did. I set out to learn everything about myself and everything about what a healthy relationship looks like. I learned about the importance of communication and honesty and empathy and forgiveness. I learned that I wasn’t so good at some (all) of those things in my marriage and that I needed to make change.

Now I am in a healthy relationship, one in which I can practice the skills that I learned instead of playing the victim. How lucky am I?

If I had continued to play the victim, to expect him to change and to take responsibility for what happened, I never would have gotten where I am today.

3. You will be in control of your emotions.

When you aren’t playing the victim, you maintain control not only of your emotions but also in control of how your relationship with your ex plays out.

I have a client who constantly reaches out to her ex via text and phone to find out what happened in their relationship and to see what she could do to fix things. She berates him for leaving her and questions his worth as a person, all the while begging him to take her back.

At first, he engaged with her, but eventually he blocked her because he just couldn’t take her anger and self-pity any longer. He no longer respected her as a person and was happy to share that with all of their friends.

I have been working with my client to stop reaching out to her ex, to accept her role in the end of their relationship, and to realize that begging and berating makes things worse and not better. That reaching out the way she was and being rejected over and over was damaging her relationship with herself and hindering her healing.

So, if you find yourself seeking to reach out to your ex, overcome with emotions and feelings of self-loathing, stop for a moment and get in touch with reality. Your relationship involved two people and its demise did too.

Hold your head up high, maintain your pride, and don’t debase yourself in front of them and you will feel better about yourself and heal much faster.

4. Finding your next person will be easier.

I don’t know about you, but I have been on dates where men go on and on about their exes and how horrible they were and how they had been used and abused and cast aside.

One man spent a full hour talking about how horrible is wife was and how she used to tell him that he was too judgmental and how stupid she was because of it. He actually turned to me and said, “You have known me now for an hour, you know how nonjudgmental I am.”

That was the only date that I almost walked out of.

My point here is that, if you are no longer playing the victim after your breakup, you will not only be more confident in yourself but you will also be way more attractive to a prospective partner.

Self-confidence that comes from not being a victim is very sexy, but so is not spending hours talking about how you had been wronged and how broken you are because of it. Who wants to get involved with someone who is broken by someone else?

So take back the power from your ex and recognize your role in what happened. If you can accept it, then you will be in way better shape to meet someone and fall in love again.

5. You will win the breakup.

My millennial daughter and her friends have translated this term for me—that the first person who is happy after a breakup “wins.”

So, pick your head up and look ahead, not back. Be determined to not play the victim but to look forward in your life and get the happiness you seek. Don’t let any ex hold you back. And picture the look on their face when they see you, happy and beautiful, living a full life without them. You will have officially won!

Playing the victim after your breakup is not uncommon.

When the heart is suffering, the brain will do anything to try to ease the pain. Playing the victim can help ease the pain because you believe that you are not at fault and if you can blame someone else, you can temporarily relieve the pain.

I believe, however, that if you continue this playing the victim after a breakup, you might feel better in the short run, but in the long run you won’t heal. In the long run you will be stuck on this gerbil wheel of self-pity and recriminations, and you won’t have a chance to live a happy life.

So get yourself up off your couch of self-pity and take back your power. Take a good hard look at your role in the demise of your relationship and be determined to make change. Keep control of your emotions so that they don’t control you and have faith that your next person is right around the corner.

Most importantly, know that letting go of playing the victim, of taking responsibility and making change, will make you stronger and more confident, which will mean that you can have a truly happy life.

I know because I did and today I am happy. Truly happy. 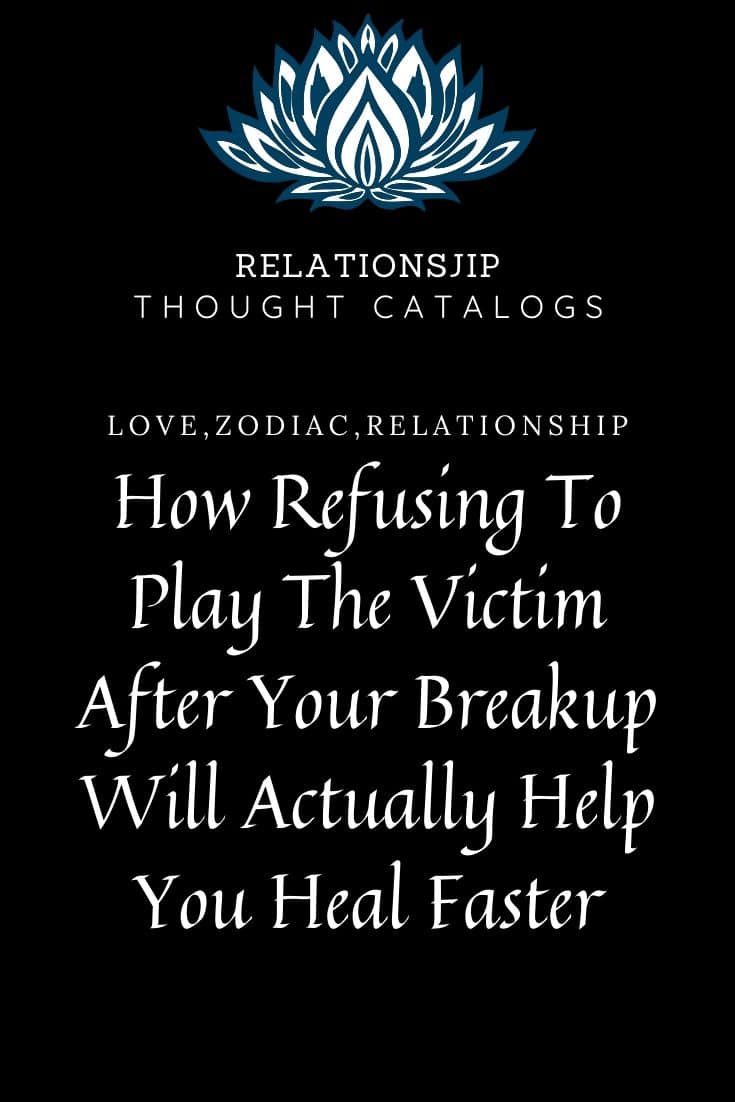