Facebook Twitter LinkedIn Tumblr Pinterest Reddit VKontakte Odnoklassniki
Time heals all wounds, or so they say. Some of us need more time than others when it comes to getting over our breakups. Not everyone can move on as quickly as the next person, but we bet we can guess how long it takes you—with plenty of help from your zodiac sign, of course. Scroll below to see if we know how quickly you get over a breakup, based on your sun sign! Related: These MEAN GIRLS Quotes Make Fetch Captions Volume 0%00:2300:40More Videos00:46Instagram Captions To Get Your Crush’s Attention03:31Halston Dare Reveals the Meaning Behind Her Single ‘Something Special’01:17Meet the Artist Behind the Kardashian’s Favorite Neon Sign00:57Tegan Marie’s ‘I Know How to Make a Boy Cry’ Music Video Inspired by Elvis!01:41We Tried Magnetic Earrings00:31North Pole Snow Marshmallow Bites00:35Musers Reveal Their Celeb Crushes00:49Whipped Cream Fruit ScoopsClose

Being the Aries you are, you’re always on the go. You never allow yourself any time to catch your breath, because there are a million different things on your to-do list at all times. Ain’t no rest for the wicked, right? This also applies to how quickly you get over breakups. While there are particular instances in which it takes you forever to move on from a former fling, you’re generally over it within two days or so. You don’t have time to wallow in self-pity, so you don’t add it to your docket. Instead, you let what happened push you to be even better in your next relationship.

Long-term relationships are your thing, Taurus. You love being in ’em, but can’t stand the time between them. Romance is your middle name, so once that fades away, you can’t help but be upset. You long for that loving experience you once had, but you’re also scared to get hurt again. This is why you tend to take roughly five years to get over any heartbreak. Even if you do move on before that time frame, you’ll never forget the person who broke your heart initially. They’ll be a part of you for years. But don’t fret, once you get over them, you’ll never worry about them ever again.

Fickle Gemini, you’re the one sign who never experiences a pattern in your breakups. It makes sense, seeing as you detest repetition and routine, and this is also why it can take you anywhere from two weeks to a month to get over a breakup. Sometimes you’re quick to move on and find someone new, other times you can forget the person, but you’re still not ready to put yourself out there again. There really is no telling with you, but you’re a pro at getting over people. You just keep telling yourself someone better will come along and that keeps you going.

Though you act tough and cold, you’re really just one big ol’ softy hidden below your rough and tumble exterior. You’re so scared of getting hurt that you rarely ever let another person see all you have to offer. This is also partly because the people you’ve let in have left you all alone. You’ve convinced yourself you’re the problem, which is why it takes you a minimum 10 years (yes, we’re serious) to get over any sort of breakup. We know that’s a long time and though you act like you’re over someone, you never fully are right away. You’ll still catch yourself fantasizing about your time together the second you tell your besties you’re completely over them.

You get hung up on someone? Why, that never happens, Leo. You’re far too desirable to let some ex who turned you down even let you think for a second you’re not. Everybody wants to be with someone like you, so you know finding solace in the arms of another isn’t going to be all that difficult. Besides, why cling to one person when you can be adored by many? Isn’t that the way you’d rather have it anyway?

You live a more cautious and calculated life than the rest of the signs, Virgo. Everything you do is always meticulously thought out, so much so that your backup plans have backup plans. If something goes wrong, you know just how to pivot. It’s the same with dating. When things start to feel off, you usually give it some time to work itself out. But when it no longer adheres to your standards, you’re quick to cut the cord without warning. When others do this to you, you’re undoubtedly upset, but you give yourself exactly a month (no more, no less) to get over them. It always works. Why? Well, because you’re one heck of a planner.

Though it may not seem like you’re one to get over breakups quickly, you are. It takes you an entire 24 hours to fully get over someone. And you’re not just saying it like most signs, you actually mean it. Because you’re a social sign, you have the love and support of so many people that you forget all about whoever broke your heart. You know that life’s not only about the more intimate relationships, but the bonds you build with your family and friends. And besides, someone who actually appreciates all you have to offer will come along in no time. Until then, you can lean on your besties and fam for unconditional love throughout the process.

You take a little bit longer to heal from a breakup than most would expect. Still, it’s not that long. You’re an enigma wrapped in a mystery and taped together by riddles. No one, and we mean no one, can figure you out. And you quite enjoy that. Nevertheless, you let people in to attempt to understand what’s lurking beneath the surface. When they get frustrated by your secrecy and leave, you’re obviously upset. You let someone in hoping they’d stick around long enough to get to know you, but they didn’t. Rather than dwell on the negative, you use that to fuel your revenge… just kidding, sort of.

As the true open-minded philosopher, you’re quick to let things go. You try your very best to not let what other people do to you weigh you down–after all, how someone feels about you is more telling of them than it is of you. When people break up with you, they expect a major fallout. Instead, they’re met with nothing but peace and understanding. You may not be happy, but you know it’s for the best in the long run. And why get mad or seek revenge when you know karma will come back to get ’em?

You’re not quick to let people in, Capricorn. You’re always busy trying to do things for other people and turn your dreams into realities, that you don’t really have time for dating and relationships. When you make time and that person ends up hurting you, you act tough and like it didn’t mean anything. We know that’s not the truth and so do you. It generally takes you around six months to completely let go of an ex and move on to someone new. While you tend to be pretty tough on yourself during this time period, ease up. You’re doing your best and that’s all that matters.

Others believe you get over breakups fast, and that’s exactly what you want them to think. You can brush off even the worst breakups like they were no big deal. But deep, deep down, you feel the sting. Though it may never manifest itself, it’s still there. You like to ignore the problem, but that doesn’t make it go away. And this is exactly why it takes you a year to move on. You try to bury your feelings to not deal with them. The next time you’re heartbroken, don’t be afraid to reach out to your BFF or your closest sibling. It’s not weak to rely on others to be there for you in your time of need, remember that.

Poor unfortunate Pisces. You’re one sweet, endearing soul who always has other people’s best interests at heart. You have the biggest heart of any sign, so you’d never hurt anyone. You’re also a hopeless romantic, so you have an idealistic outlook on relationships. Even when things are bad, you’re still rocking those rose-colored glasses thinking everything’s fine. When someone breaks up with you, it takes you forever to get over them. In fact, you never really forget all the past heartbreaks you’ve experienced, even when you do find a new love. 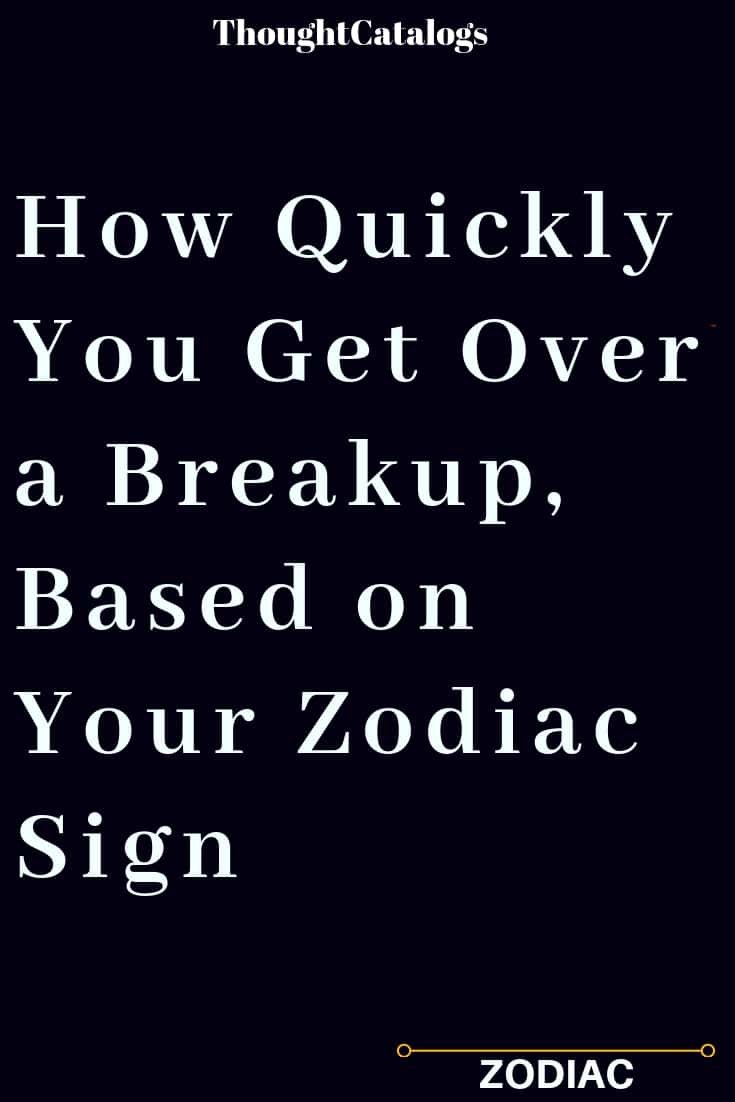 The More You Play With Her, The Faster She’ll Lose Interest

How You Act When You're Sick, Based on Your Zodiac Sign