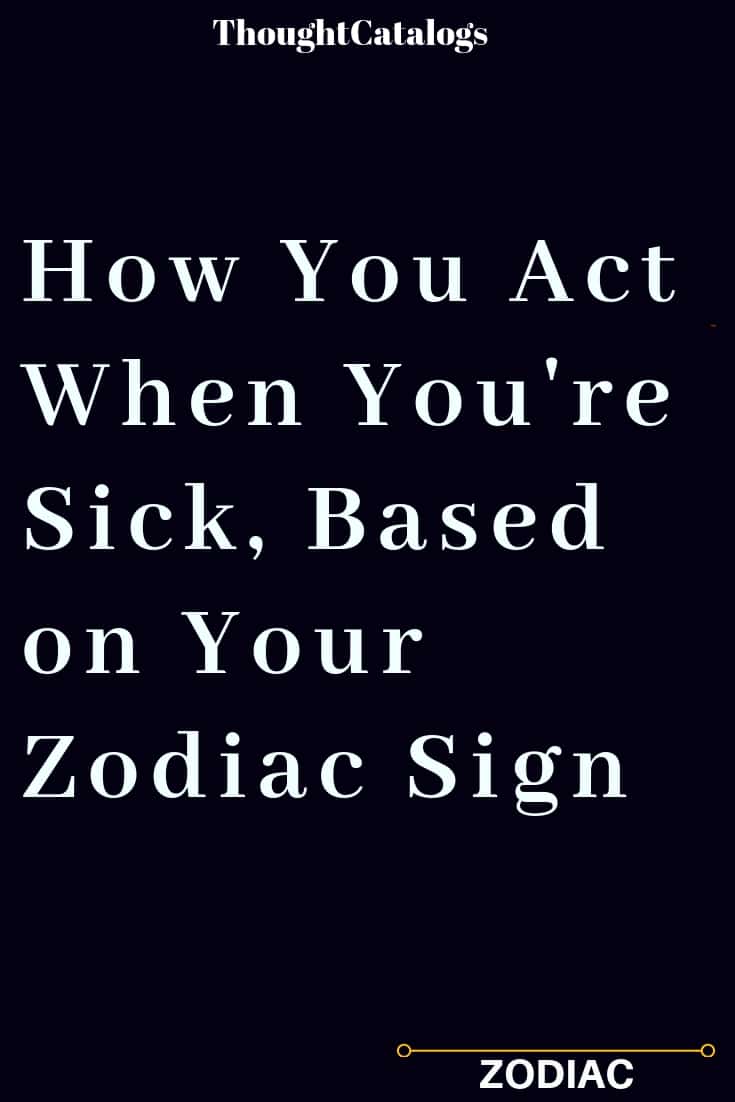 Facebook
Twitter
Pinterest
WhatsApp
What do you do when you wake up with a sore throat, runny nose and dry cough? Your reaction to sickness is a reflection of the type of person you are, and chances are your zodiac sign plays into this response, too. Scroll down to your sign to find out what you’re like when you’re sick.Related: These MEAN GIRLS Quotes Make Fetch Captions

When Aries gets sick, they really get sick. While they’re usually fearless and up for anything, sickness takes everything out of them. Even if it’s just a case of the sniffles, they’ll want to spend every moment in bed and be waited on hand and foot. They’re the first to admit they go into full baby mode when they’re sick, and once they’re better, they’ll be able to take on the world again.

Taurus (April 20 – May 20): Actually Takes Care of Themselves

Taurus won’t let a little thing like illness take them down for too long. They know that even if they have a lot to get done, the best thing to do is go to the doctor, get plenty of rest and fluids and take things easy until they get better. They know people depend on them, but that they can’t help anyone else until they’ve helped themselves. They tend to recover from being sick lickety-split.

Poor Gemini. This friendly, sociable sign does not cope well with sickness. They tend to feel especially unwell when they get sick, and in addition to feeling like crud, they tend to get a major case of FOMO when they have to stay home. They’d much rather be spending time with friends and catching up with everything going on in the world, which makes them feel even sicker. But just when being sick starts to feel like the status quo, they get better.

People-pleasing, crowd-loving Leos just don’t think they can afford to get sick. Even when their noses are visibly running and they can barely keep their eyes open, they pretend nothing is going wrong and keep on trucking. They don’t want to admit to themselves that they’re susceptible to illness, and they definitely won’t let it on to anyone else. This can wind up making them ever sicker, but even then they won’t give in.

When a Virgo gets sick, they don’t think it’s anybody else’s business. They take their vitamins and rest up in their free time, but they continue on with work or school like everything’s normal. This careful balance doesn’t always work out, but Virgo believes it’s important to keep the ball rolling no matter what. At the end of it, you’d never know that Virgo was sick in the first place.

Libra is perfectly capable of fulfilling every one of their duties, even when they’re under the weather, but you wouldn’t necessarily know that based on how they talk about their sickness. They’re social creatures, and when it comes to them, misery definitely loves company. Based on a Libra’s complaints, you might think things are way worse than they actually are. However, venting is just their way of feeling better and making it through the day.

Scorpio is never afraid to take a sick day. They think temporarily disappearing from school or work adds to the mystery and intrigue of their character, and they’re never going to pass up on the chance to take things easy. When they’re not feeling well, they’re happy to rest at home and catch up on everything they’ve been missing out on because they were too busy.

For Sagittarius, getting sick just isn’t an option. They’ll do everything to reject the sickness, from taking every vitamin and medicine known, to pretending that everything is under control. Of course, these remedies don’t work every time, and when Sagittarius finally succumbs to getting a cold, it hits them hard. Good luck getting them to do anything, because they can be the most dependent and whiny of all the signs in this stage.

Capricorns are go-getters whose drive can’t be stopped by anything, and they’re not going to let a little sickness get in their way. Recovery methods will vary from Capricorn to Capricorn, but at the end of the day, you’ll find that they’ll always manage to accomplish their goals by the deadline. They’ve usually managed to get better by the deadline, too. Frankly, we don’t know how they do it.

Aquarius always knows how to roll with the punches, and that doesn’t change when they get sick. They crave freedom and independence, and since feeling unwell totally cramps their style, they’ll do anything to avoid it. When they feel something coming on, Aquarius simply takes preventative steps by ingesting all of the right supplements and medicines, then powers through their day. No matter how bad they feel, their sure determination will get them through it.

Pisces doesn’t have time for feeling icky. When they catch something, they know that the best remedy is fluids and rest. They’re happy to basically sleep for days on end if it means that they’ll feel good as new at the end of it. Everything else can wait until they feel better.

People’s First Impression Of You (In 3 Words) For Him And Her, Based On Your Zodiac Sign

10 Things Guys Love While Dating But Hate In A Relationship

This Is Your Life Motto, Based On Your Zodiac Sign

What Enfp Relationships Are And The Effects They Have

13 Signs Of An Immature Relationship

ThoughtCatalogs - January 23, 2020 0
Brace yourself for January 24th as a New Moon is rising in the sign of Aquarius to bring out your emotional side. Expressing yourself isn’t...