Aries are excited and always down for an adventure, but this can negatively impact relationships. They loathe predictability and settling into routines, so it’s not uncommon for them to take off without even talking to their partner. They expect a lot from people without ever verbalizing what’s going on. This demanding nature, paired with a tendency for impulsive nature, can make sustaining relationships difficult.

Taurus are notoriously stubborn and hard to get to know. Once you crack that reserved outer shell, you’ll learn how obsessed with success they are. It’s admirable, until it starts taking a toll on everyone around them. They’re very “my way or the highway” which can be off-putting, to say the least.

A fatal flaw for a Gemini is being, well, kind of cruel. It’s not that they don’t care, but empathy for others doesn’t come as easily as it might for other signs. Their behavior can be perceived as cold or unfeeling, but it’s rarely ever intentional. That being said, they can be very hurtful to partners. And it’s not fun to be around.

Cancers are very, very sensitive. This is a double-edged-sword. They bring this sensitivity to relationships, which means they feel and love deeply. But because of this sensitivity, they also overreact and take things personally.

Leos need a lot of attention, in relationships and otherwise. To be with a Leo is thrilling and passionate, but it’s also exhausting. They need constant validation and praise. It takes A LOT of energy to be in a relationship with a Leo.

Virgos are HIGHLY critical and it’s a real buzzkill. They want everything done perfectly and will point out anything they don’t like or that doesn’t fit their impossibly high standards. It’s hard to feel good enough when dating a Virgo.

Libras are actually really great in relationships. Sure, they’ve got flaws like anyone. But on the whole, they are good partners. YOU GO, LIBRA!

The thought is that a Scorpio will sting you. Emotionally, 100%. They are known to have commitment/intimacy issues and do not understand how to interact within a relationship. They have a hard time trusting people, so they’ll always be expecting you to screw them over. And because of that, they might just do it first.

Because they are so independent, sometimes they get a little freaked out at the idea of losing that within a relationship. They prefer to be in control, and it can be a little annoying at times. They require a lot of spontaneity or there’s always the chance they’ll decide they’d prefer to be alone, free to do whatever.

Capricorns can be a little stuffy. Very responsible and goal-oriented, sometimes they can be a little boring to be with. It’s like, c’mon! Spice it up every now and then.

It’s hard to feel comfortable in a relationship with an Aquarius. They’re a huge mystery, and you never know exactly how they feel. Being with an Aquarius usually ends up with a ton of insecurity and questions.

Despite how romantic they seem, it’s not uncommon for a Pisces to go missing. They exist in their own heads way too much and when life doesn’t mimic their daydreams, they ghost. It’s hard to rely on them. 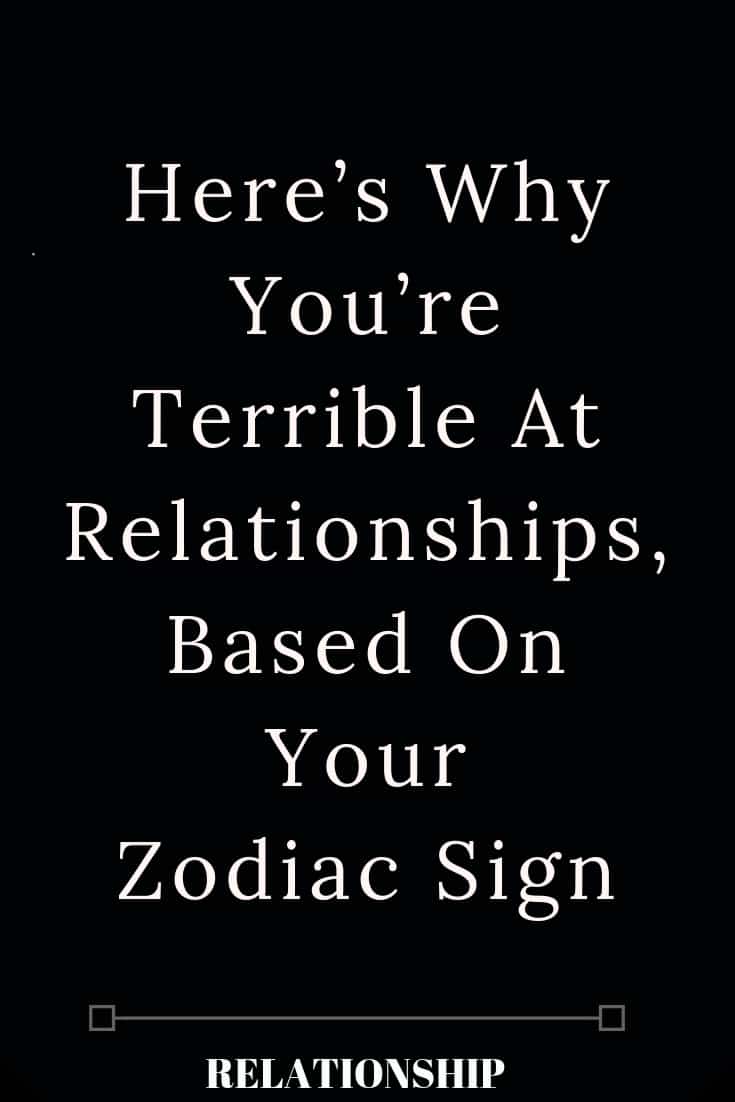 This Is How She’ll Sabotage Her Relationship, Based On Her Zodiac Sign