On January 31, the blue blood moon will be happening in Leo. This will be the first time that a blue moon (two moons within the same month), a super moon (a full moon that comes as close to the earth as it can in its orbit), and a lunar eclipse (also known as a blood moon) have happened simultaneously in more than 150 years.

That means that the kind of emotional energy that mother moon will be shining on the planet is both extremely rare and extremely potent. The moon is the ruler over love’s emotional waters, and can be a mirror to our hopes and inner demons. With this amount of power in the sky, a breakup during the super blue blood moon is to be expected, particularly if you need a rupture in your life to stimulate new growth.

Because the moon, mysterious though it may be, never really messes around. It’s tied to the underworld, the place in our subconscious where our demons lie. If you haven’t made piece with your inner demons yet, then the super blue blood moon will be peeling back the layers of your outer image so the truth can come out. The two of you can choose to confront your demons together, facing them one by one. But if your relationship simply isn’t up to the task, the pressure will push the two of you apart.

Here’s why the super blue blood moon might bring about your breakup:

Ready to get into some goddess talk? The moon is ruled by the goddess Artemis, who also keeps the animals in the forest safe from the hunt. Artemis protects women, guarding over them during childbirth, fiercely defending the people she loved, and basically has nothing to do with men. In fact, when men appear in myths about her, she is usually destroying them.

What role will Artemis play in the super blue blood moon? Well, for one thing, it’s significant that Artemis never married. If the force of Artemis is causing your breakup, then it’s because she thinks you need to develop more inner strength in order to be your own best protector. Sometimes, being alone in the world is the only way we can join in with the creatures of the forest, tame our inner demons, and learn how to channel our vital force to find inner peace.

2. The Moon Gives Space For Healing

Artemis is the goddess of women, and her spaces of worship were accessible only to women. She defended her mother, using her arrows to kill her rival. She was an accomplished midwife, who delivered her twin brother immediately after being delivered herself. She executed a hunter who peeped on her in her bath. These actions, although violent, were not needlessly cruel: they were necessary to protect her wilderness home.

If Artemis brings about your breakup during the super blue blood moon, it’s because she is defending your inner sanctuary. There’s a reason why the wilderness she rules is only accessible to women. The secrets of the forest are healing, and need to be accessed alone.

If the super blue blood moon brings about an end to your relationship, then it’s because something about the way the relationship was structured was breaking the will and passion of your instinctive nature. You might be sad that a relationship has ended, but you won’t be in mourning forever. Even though the moon might bring about temporary destruction, its lasting effects will be harmonizing ones. Look to your friends and community of women and femmes for support.

If you break up on or around January 31, try to keep your self-interest separate from your enlightened wisdom. Part of you might fight the breakup and try to get back together with your ex. This is the part of yourself that wants to stay bound to a relationship that isn’t working.

Tune in to your higher power, your animal sense of intuition. This is the life-force that will guide you to the highest reaches of your esteem. 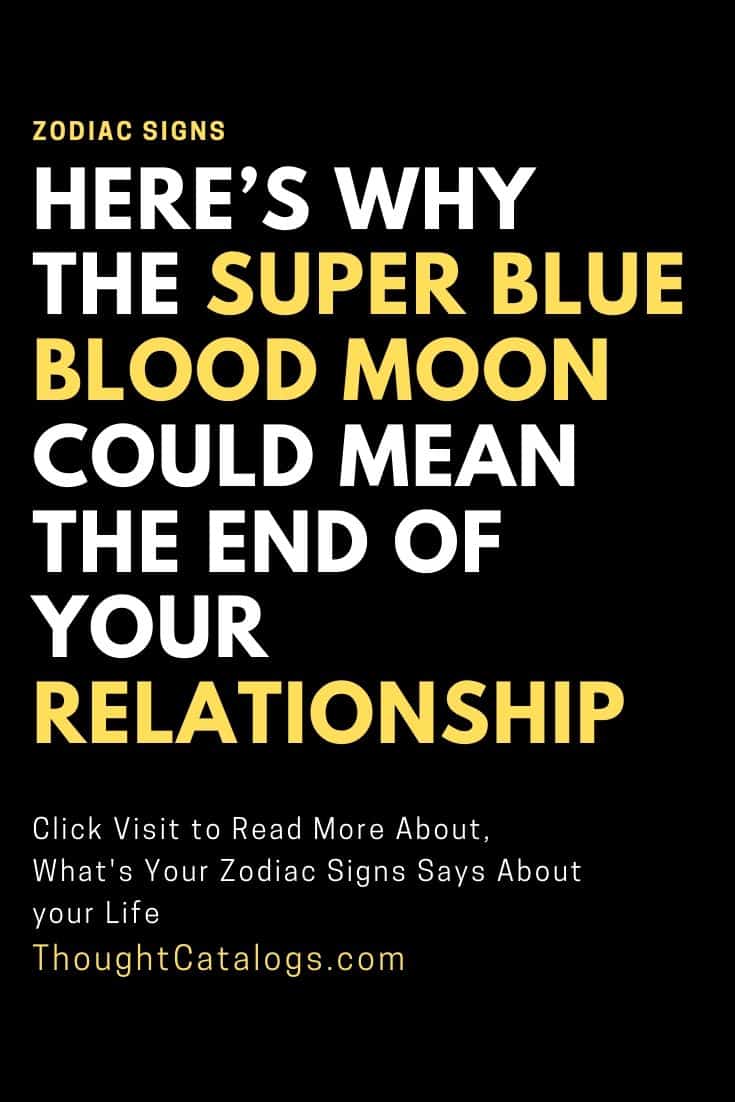 Native American Zodiac And Its True Meaning About Your Personality

This Is Your Most Secret Fear In The First 6 Months Of 2023, Based On Your Zodiac Sign
14 hours ago