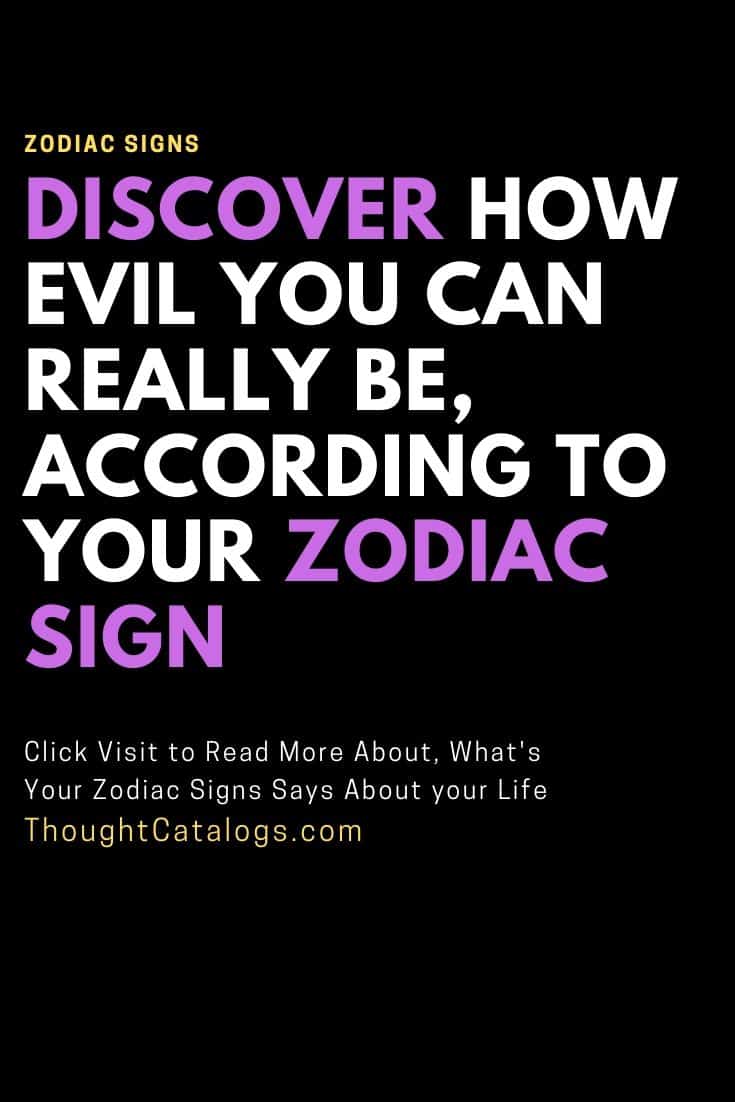 On numerous occasions, we have revealed traits of the personality of the Zodiac signs. In most cases, these are virtues that define our personality, our strengths both at work and in relationships with our loved ones or as a couple.

However difficult it may be for us to admit it, we are human beings and we also have negative sides. It is worth knowing them to know in which area to improve and to know what to do and not do when in relationships with other people. That is why today we bring you the darkest side of every sign of the Zodiac.

If they feel threatened, they threaten their enemy but fortunately rarely act on their threats. It is rather a method to frighten someone who has angered them. Although they can do damages in an ignorant way, it is not someone you want to have as an enemy. Aries is rather docile and does not attack without reason.

Taurus is one of the kindest signs that exist in this world.

You will have to try very hard to provoke them. And even when provoked, they will not want to hurt you, at least not in broad daylight. Under the backdrop of the metaphorical night is another issue. Taurus will teach you a lesson or two, indirectly, without anyone knowing. How? That we can not say because the Taurus’ wit is huge and everything depends on the situation in which you are. However, for example, if your new chair is broken because it lacks a screw, it is probably an angry Taurus…

As always, the most accurate definition of this sign is to have two faces.

So they can easily have a good side and bad, as in the evilest side there is. That’s why the darker side of a Gemini will act as the typical friend/enemy that will ultimately betray you. If provoked, they are capable of being a liar and a manipulator, to the point where you no longer know if it is your friend or enemy.

Cancer is by definition a very private sign with its intentions.

You never know what you can expect from them. In addition, to make things more difficult, Cancer is also a very unsteady sign. They are able to contradict themselves on many occasions and that is why they are one of the most fearsome enemies in the world. Not knowing what to expect from them and often changing their minds, Cancer can become an enemy without you realizing it. However, they will not always want to attack but may try to attack those who most hurt them.

The lion is the king of the jungle so we are talking about a sign of power, ambition, and everything related to it.

Tyranny too. Leo is a born dictator. No surprise there because they like to be the leader in most situations. The evilest side of a Leo is that they may want to regain power in whatever situation they are in. The best thing you can do is not have Leo as an enemy, otherwise, you may have a power war.

Those born under the constellation of Virgo are analytical and calculative people, so there are very few things that can surprise them (maybe an angry Cancer?).

That is why it is very difficult to break a Virgo’s heart or hurt them in any other way. They analyze everything, know what is coming before it happens and reacts beforehand. Yes, if you try to hurt a Virgo, they’ll most likely respond instantly. You may even fall into your own trap due to Virgo’s ability to analyze! How to avoid it? Don’t even try making them angry.

There is no one more balanced than a Libra.

It says their Zodiac sign. That is why, if they hate you, they will let you know and they will forgive you for it. They can not afford to hate because that causes an unbalance on their scales. However, their words can act like razors and scar your heart forever. So do not give them reasons to hate you.

What can you expect from a being that is a mixture of wasps, spiders, crabs, and nightmares? If you do not want a Scorpio to bite you, do not mess with them.

This is a sign of the Zodiac that has a very clear life. They are decisive and knows perfectly how to treat their friends… and their enemies. If you decide to have a Scorpio as an enemy, it is better that you never come in front of them again. They are people who never forgive. If you have failed once, they will remind you of that forever. They will make you suffer and will not regret it.

However, once they are done being angry, they will forget everything and continue on with their life. They could care less for someone who is not part of their life anymore. Although this can make people not trust a person of this sign, you have to know that they can be very eccentric people and you will never really know when they are going to retaliate.

People of this Zodiac are usually calm, although very proud.

They are very focused on their own world and it is not easy to have an enemy of this sign. No, they will not want to murder you but they will protect their space and their honor with everything they have. They will take revenge in a terrible way by taking advantage of your weak point so that it hurts as much as possible. If you hurt the pride of a Sagittarius, they will do exactly the same.

Aquarius by definition is a grumpy person who is always in a bad mood.

But that does not mean they are evil. It is rather the opposite. They do not give much importance to things or worry too much if someone harms them. They go ahead with their life. That being said, you will not have access to the life of an Aquarius and they will make it very clear to you. You won’t even be welcomed to any of their parties!

Pisces is a sign who has a highly developed emotional life.

They get along with other people, it’s lovable that they are sensitive and calm. Emotions are very important to them and you do not want to harm them in any way. But behind closed doors, Pisces can be very spiteful. They are silent and it is endured with their anger. If you have done them harm, they will pay you with the same coin in a completely unexpected moment and in a very sickly, and even sometimes sadistic way. Have you seen the movie Saw? Well, that.

As you can see, every sign of the Zodiac has its way of being evil. Of course, what we have presented here are the most malevolent behaviors of each sign. That does not mean that the slightest dispute between a person will lead to the mentioned. However, in the case of very strong emotions, these patterns may appear, so it is worth knowing them.

September 2021 Horoscope Forecast: See What September Has In Store For You

The Dark Side Each Zodiac Sign Hides – What’s Yours?

The Quote You Need To Hear Right Now, According To Your...

ThoughtCatalogs - May 2, 2019 0
ARIES “It’s okay if you don’t like me. Not everyone has good taste.”   Aries is full of strength. They are characterized by a strong will, determination,...